The community of Glenorchy never had a large population and had all but vanished until the city of Oakville started to expand into the area.  It won’t be long before the community will have lost all of its historical charms among new townhouses and subdivisions.  The few original houses and a school stood along the fourth line near Burnhamthorpe Road. 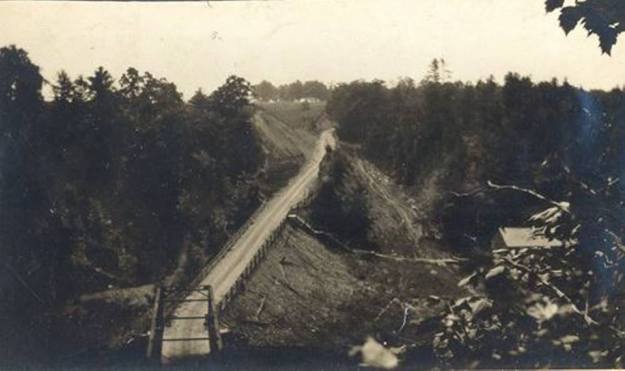 The 1877 county atlas below shows the east branch of Sixteen Mile Creek in blue as it flows under the fourth line which is marked in brown.  Glenorchy is not marked on the map, perhaps because it didn’t have a post office.  The name is likely of Scottish origin and means valley of tumbling waters.  Sixteen Mile Creek and the picturesque valley it flows through could easily give rise to a name like that.

This picture shows the fourth line with the bridge in the foreground.  A set of stairs leads down the side of the hill to the school which is located in the ravine.  The county atlas above shows the school to the west of the road which means that the earlier road and bridge alignment likely took a more direct route to the bottom and may be still visible behind the stairs at the time of this picture.  This photo was supplied by Neil Omstead.

The fourth line makes a steep descent to the creek and on this day the ice was just forming in the water. 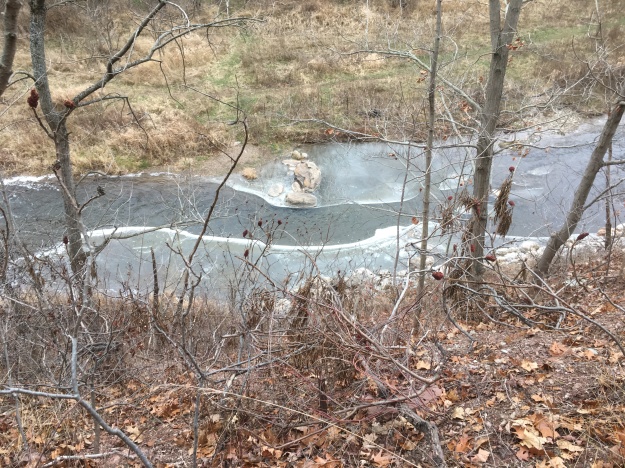 As you follow the fourth line south down the side of the ravine you see the back of the remaining abutment from the former bridge.

The fourth line bridge over Sixteen Mile Creek is shown in the county atlas of 1877.  The exact location of this bridge has been hidden by time.  In 1898 Dr Ansun Buck of Palermo, a nearby ghost town, designed a new bridge over the creek.  It was built with the north abutment made of cut stone.  The picture below shows the bridge around 1900 and was taken from close to the location of the public school which was built in the floodplain of the creek.

Only the north abutment remains today.  The south approach to the bridge can still be identified by a pathway that has a ridge of earth piled on each side from the levelling of the road.  The north abutment has a major crack in it where the soil has washed away from behind the cut stones and they are slowly shifting.  There is a possibility that this abutment may partially collapse. 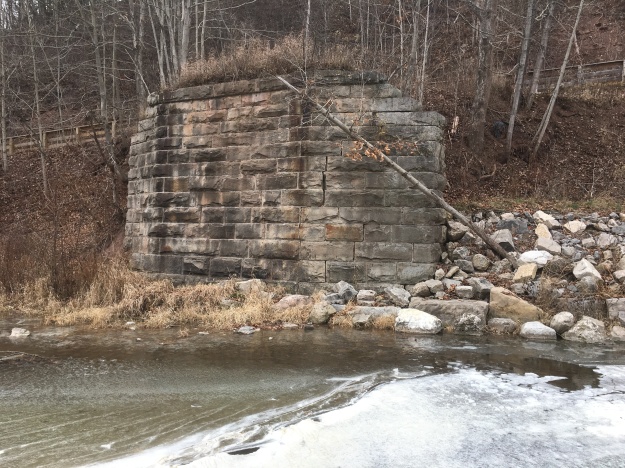 The bridge stood until 1964 when it collapsed.  There was construction in the area and traffic was being diverted onto the fourth line.  A fully loaded potato truck followed the detour onto the bridge but it collapsed under the weight.  The picture below from the Halton Archives shows the truck in the ravine and the crane that was brought in to retrieve it.  The picture is dated March 1965 however that is the date it was printed and not the date it was taken.  In those days, you didn’t get to upload your pictures from the side of the river, you had to wait until the whole roll of film was finished and take it in for development. 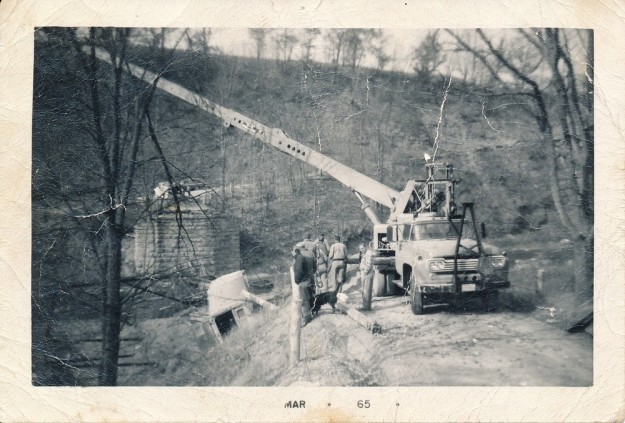 A new bridge was built over the creek in the 1980’s and online sources say it was built on the same abutment as the earlier bridge.  Having visited the site it seems likely that it was built a hundred metres downstream where today’s footbridge crosses.  This bridge was closed in 2001 on a permanent basis.  The steep slope of the northern approach combined with a hairpin turn onto the bridge meant that it was closed for the winter every year anyway.  The road was closed to vehicle traffic but left open for pedestrians and cyclists.  Looking below the new footbridge you can see the larger cut stone abutment for the 1980’s bridge. 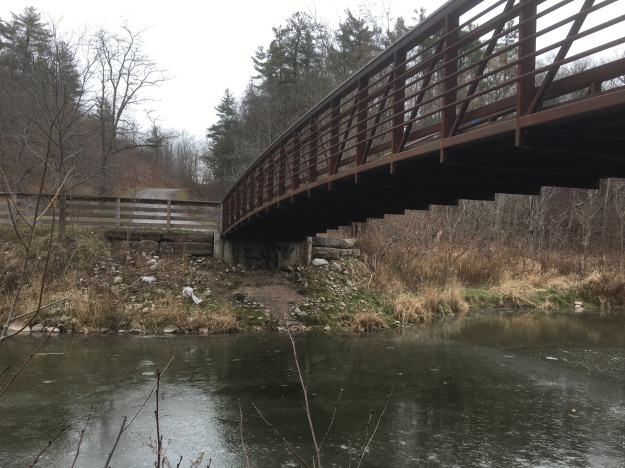 Looking from the south toward the bridge you can see the sharp turn in the road and the steep incline as the road makes its way toward Lower Base Line.  It is easy to see why a fully loaded truck was out of place coming down the steep hill onto the hairpin turn that leads onto the bridge.

In 1835 George Ludlow and his wife Francis moved to Trafalgar and built this log cabin which stands at the end of Burnhamthorpe Road in Glenorchy.  Francis gave birth to their six daughters in this three-room cabin.  Similar to the first house on the Stong property (now Black Creek Pioneer Village) this house has two bedrooms and a living room where the cooking, weaving and dining would have been done.  The end of the house with the chimney had this family room in it.  The bedrooms are on the end of the house with no window.  The cabin is known as the Ludlow/Slacer cabin because of Martha, the second oldest daughter, who lived here after she married John Slacer.  The cabin is marked with a red arrow on the county atlas above.

In 1991 there was a sign welcoming people into Glenochy.  The population was 18 at that time.  This house is near the corner of the Fourth Line and Burnhamthorpe Road.  It is one of several that appear to be uninhabited although this one has a light on over the front porch, not exactly common among abandoned places.  There is very little information on historic houses in Glenorchy, unlike nearby Palermo but this house stands on property that also belonged to John Slacer in 1877.

Kings Christian College is located at the corner of the old Fourth Line and Burnhamthorpe where it replaces a couple of historic homes.  This set of gates stands on the south side of Burnhamthorpe Road but a quick investigation shows that whatever they originally announced, remains here no more.  Perhaps they once led to the farmhouse of T.L. Johnson and I’ve marked a potential laneway in green on the map above.

Glenorchy may have had only 18 people in 1991 but since then it has a brand new subdivision and the town of Oakville is approaching quickly.  The Glenorchy Conservation is yet to be explored and so a future visit is in order.

11 thoughts on “Glenorchy – Ghost Towns of the GTA”