For the second year in a row I have had the pleasure of seeing a leucistic robin along the East Don River.  This is the same bird I photographed last year living in the same small area between the Rainbow Tunnel and the DVP Tunnel along the East Don Trail.

Leucistic animals have a genetic disorder that causes pigmenattion to not reach some of their feathers or fur.  Unlike albinos they do not have pink eyes or skin.

The cover photo shows that the leucistic bird still gets the worm.  In this picture the worm has been swallowed and the bird has turned an ear to finding another one.

Leucism can result in a great variety of white colouring but the skin and eyes are always normal colour.

Unfortunately, prejudice exists in the wild as well and leucistic animals are less likely to breed because they get shunned during mating season.  This one was feeding among a group of other robins as if it was part of a flock. 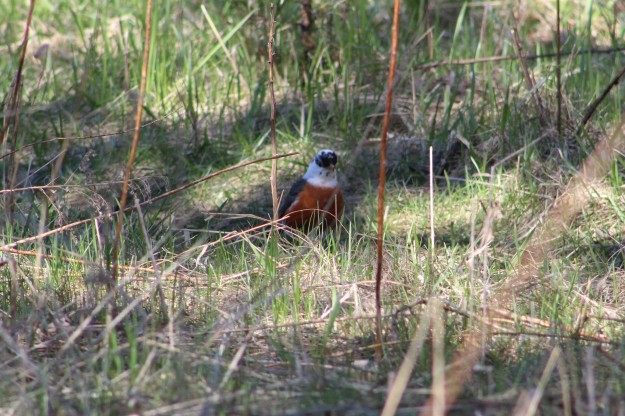 The feathers on the back of the neck of this robin are pure white and when in flight the wings show a great deal of white as well.

Robins do not use the same nest every year but they may return to the same area if the food and nesting sites were plentiful.

A robin can live for up to 14 years in the wild but the average is only two years.  It was very cool to see this one again, assuming the white headed robin in the picture below is the same bird.

Check out our top twenty stories from the first five years as reviewed at this link.  Back Tracks – 5 Years of Trails

1 thought on “The Leucistic Robin”