Armadale sat on the border between Scarborough and Markham at the intersection of Steeles Avenue and Markham Road.  Originally named Magdala, the community was a typical crossroads hamlet.  It had a couple of general stores on the west side of Markham Road just south of Steeles Avenue.  There was also a blacksmith shop and brick yards as well as a post office.  When the post office opened in 1869 the name was changed to Armadale.  Oddly enough the small community had two buildings seemingly in competition, a tavern and a temperance hall.  The county atlas below was drawn in 1877 and shows three of the homes featured below as well as the location of the church and parsonage on Passmore Avenue that would be built three years later. 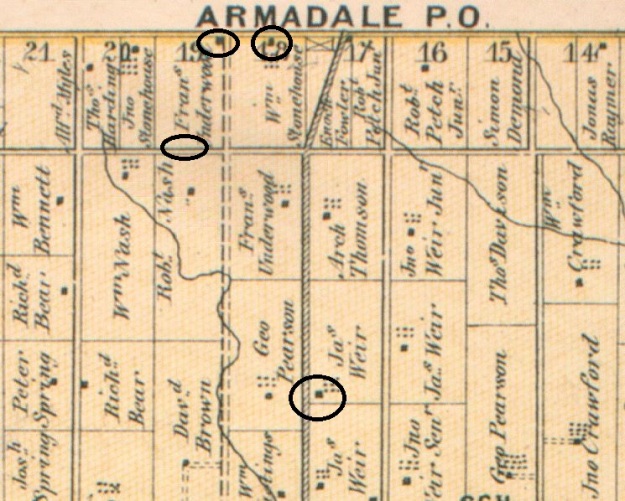 James Weir was born in Scotland in 1814 and came to Canada in 1833, arriving in Scarborough.  During the Rebellion of 1937 he sided with the Loyalists and helped to put down William Lyon MacKenzie.  He arrived in the area of Armadale in 1840 and settled down to raise a family of 13 children.  As his wealth grew he built a three bedroom home so his boys could have a room as could the girls.  James and his wife kept their own room, hence the thirteen children. 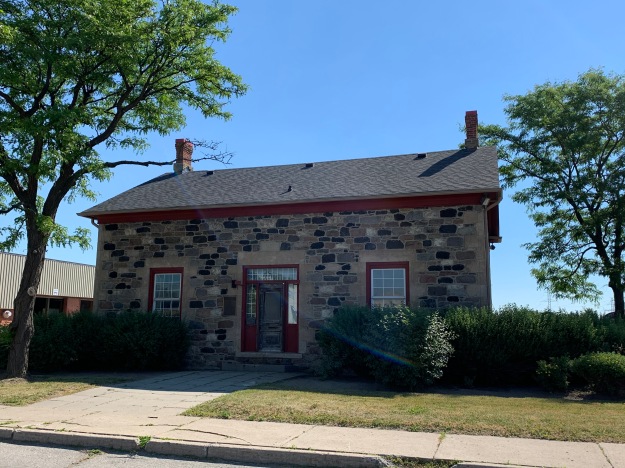 The walls are made of sixty centimeters of field stone while the lintels and quoins are made of Limestone shipped from quarries in Kingston.  The house was built in 1861 and James took the unusual step of having his name included on the date stone above the door.

The house has three chimneys, including the one on the kitchen at the rear, which was a sign of wealth.  The house was in danger of being demolished but was saved by the land developer in 1975 and moved closer to the road.  The inside is currently in the midst of some kind of restoration. 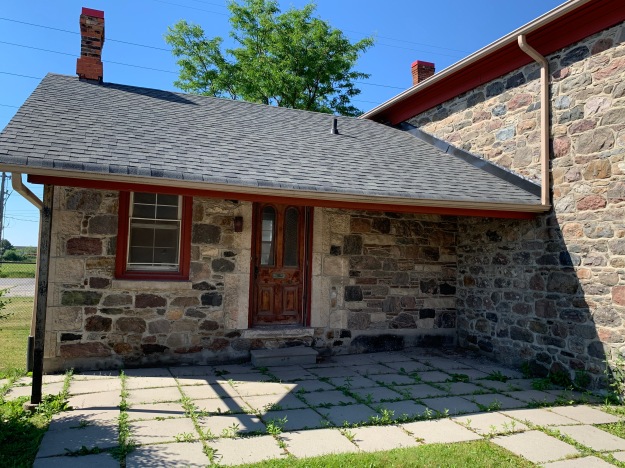 Just west of Markham Road stands the oldest continually serving Free Methodist Church in Canada.  The church was built in 1880 on land bought from Francis Underwood for $1.00.  The church denomination started a year before the American Civil War and was part of an organized movement to abolish slavery that helped people to freedom through the underground railroad.  There is a separate story with more details about the Armadale Free Methodist Church.

The church cemetery lies to the east of the sanctuary.  Among the people interred here are William Stonehouse and Fancis Underhill.  William is laid to rest under one of the flat limestone grave markers in the centre of the cemetery.  Francis is remembered by the single example of the tall round monuments that became popular in the late Victorian period. 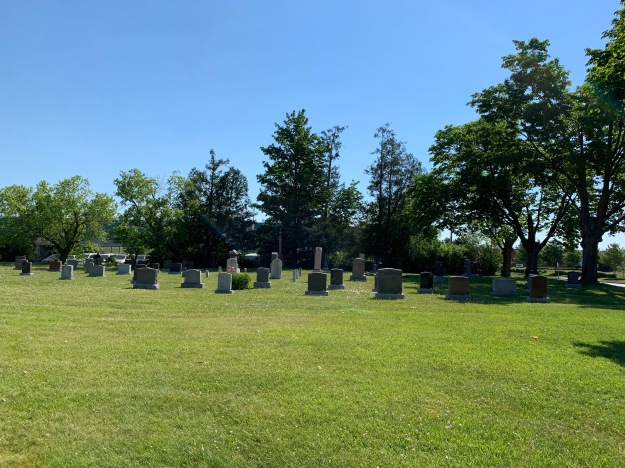 Just to the west of the church stands the former parsonage where the pastor and his family lived.  Daryl Holton confirmed that his father was the pastor of the church between 1959 and 1962 or 1963. 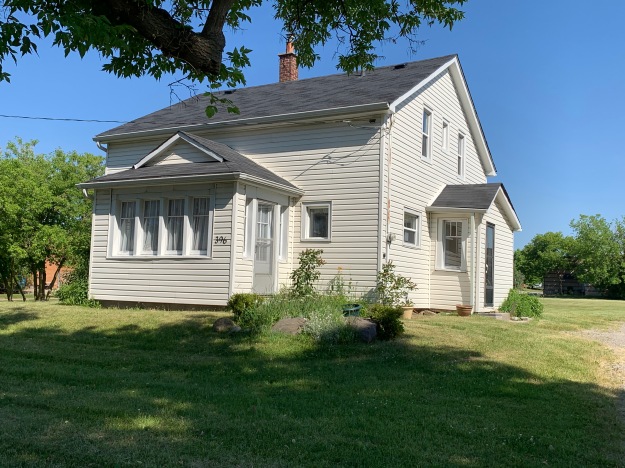 Francis Underwood bought lot 19 in 1875 and lived in the earlier farmhouse until he died in 1890.  His son, Richard, then owned the property until 1907.  He replaced the original house with a story and a half home built in an L shape.  The west elevation has a central door between two windows.  The north side has another entrance and the chimney while a rear entrance is found on the south elevation.

The house is marked “No Trespassing” but that hasn’t kept people from breaking into it and throwing everything around.  Hopefully the developers will keep their commitment to restore this house and feature it as part of the mall that is being developed on the property.

William Stonehouse lived on the farm to the east of the Underhills.  His house is a regency cottage style house which is one of the early form of architecture in Ontario.  I found that there is some conflicting information on the internet that shows this house as belonging to Francis Underhill.  This is in conflict with the city bylaw 107-2007 which describes the Underhill house for its historic designation.  Unfortunately, the confusion about the Stonehouse home has been  increased when the Architectural Conservancy of Ontario picked up the mislabeled picture and republished it.

This is the historical photograph that is causing the confusion.

William Stonehouse lived from 1817 to 1886 and passed the small home on to his son William  Stonehouse.  The home originally stood slightly farther to the east but was in the way of redevelopment.  The developers originally wanted to demolish it along with the Underhill home but they are both listed on the historical register for Toronto.  In the end they decided to save them both for future restoration.  The Stonehouse home was lifted and moved.  It still sits on a series of yellow steel beams and could be relocated again quite easily.

Unfortunately, the home has been compromised and trashed inside.  Smoke stains on the underside of the eaves in a few placed suggests that there was a fire in there at some point.  I hope it hasn’t been destroyed beyond the point of restoration.

James Daniels was one of the earliest settlers in the Markham area and appears in William Berczy’s 1803 census.  In 1818 he bought the farm at the north west corner of Steeles and Markham Road in what would become “downtown” Armadale.  They lived in a small brick home that had been built in the 1830’s and raised their children there.  In 1840 they sold the farm to their son John who build a new home in 1851 in the Georgian Style.  His home is one of the few remaining in the community that is in livable condition. 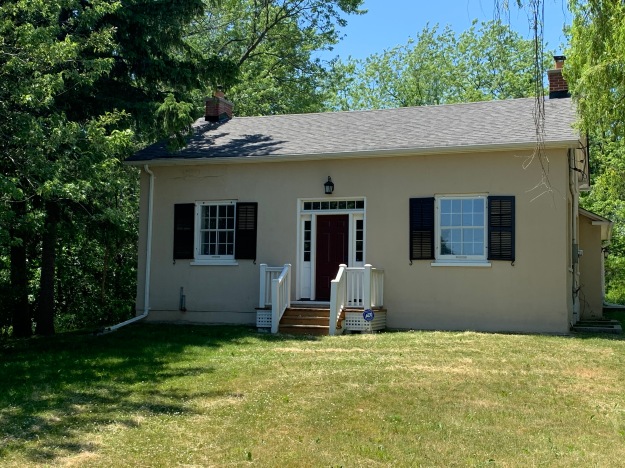 Armadale wasn’t served by the railroad when one was constructed nearby and this caused it to decline in relative importance.  The post office closed in 1917 when rural mail delivery began and eventually most of the buildings in the original core of the town were demolished.  The archive photo below shows the post office and general store as it once appeared.

The town of Armadale was an important local community that has been all but forgotten.  Don’t forget to check out our story on the Free Methodist Church for more details.  Also, large portions of Passmore Avenue have been abandoned.  Follow the link to read about Abandoned Passmore Avenue or Passmore Forest.

2 thoughts on “Armadale – Ghost Towns of the GTA”