Kariya Garden Park was officially opened in July 1992 in honour of Mississauga’s twin city, Kariya Japan.  The idea of sister cities, or twin cities, arose following the Second World War as a way of creating respect and commerce between former foes.  The city of Mississauga was twinned with Kariya on July 7, 1981.  To share a small bit of their culture with their twin city, there is a Mississauga Park in Kariya, Japan to match the Kariya Park in Mississauga, Ontario.  The Japanese city of Kariya has a population of about 150,000.   There are a few paid parking spots on Elm Street just east of Kariya Drive.

Japanese Gardens are designed with shrubs and rocks that are meant to have several layers of meaning.  The Japanese have developed their gardens over a 1,500 year period and the idea is to delight the senses and challenge the soul.  Kariya Gardens has worked hard to capture this sense of balance and aesthetics.  As you enter the park through the front gatehouse you see a small cascading water fall with a Red Japanese Maple standing beside it.  Every rock placed in the garden has a meaning and the city has provided a detailed tour guide explaining everything. 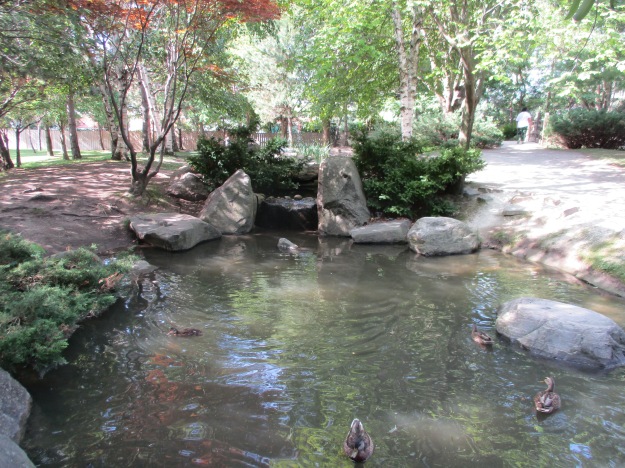 The south end of the park is being developed into a more deeply wooded section.  This area also includes several colourful gardens to compliment the Japanese Cherry Trees which bloom in May. 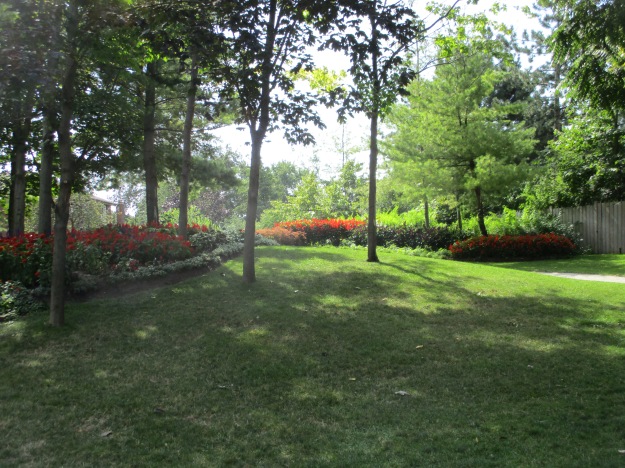 The south pond has a large rock in it which is known as turtle rock.  It is meant to represent a turtle coming out of the water.  On this day, there was a turtle sunning itself on the rock.  Turtles are said to be the oldest group of reptiles and are claimed to be unchanged in 250 million years.  Unlike many shelled creatures, the turtle cannot crawl out of its shell as it is attached to the spine and shoulders.  Turtles don’t breathe like most creatures which expand the ribs to make room for the lungs to take in the air.  Turtle shells prevent this and so the animal has an extra set of muscles to pull the other organs out of the way while it takes in air and then pushes on the lungs to expel it.

The gardens were designed in 1989 by Mississauga City landscape architects and then reviewed with their counterparts in Japan. Stones have been set up to represent a dry stream bed.  The stones are placed closer together to represent the faster moving water and smaller stones imitate slow moving eddies in the stream.

Outside the park, on the north end, is a Zen garden which can be seen from the bridge across the north pond.   There is a pavilion which separates the north pond from the Zen garden.  The pavilion is made of two main sections which each represent one of the twin cities.  The two sections of the pavilion are joined in the middle where a friendship bell hangs. 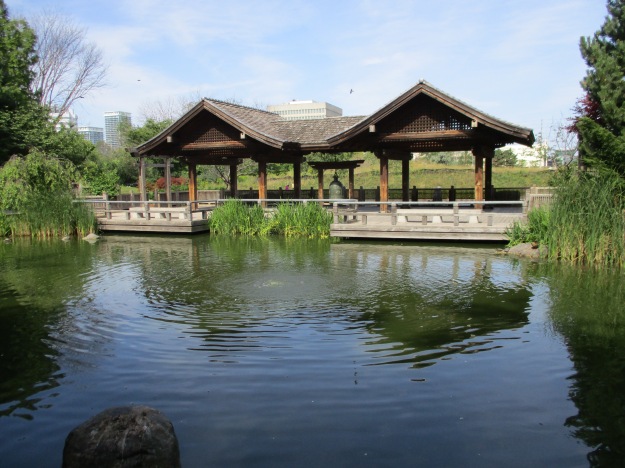 The friendship bell was cast in Japan and represents the friendship that the two cities have forged together.  It was installed for the opening ceremonies of Phase 2 of the park on July 7, 2001, and is just one of many sculptures that have been donated to the park by the City of Kariya, Japan.  The inscription on the bell reads “By welcoming the new century this bell is produced as a symbol of everlasting friendship between the City of Mississauga and the City of Kariya”.  The bronze bell is rung on ceremonial occasions.

Kariya Gardens is a unique park in the city as it provides an interesting and relaxing look into the culture of a Japanese Garden.