It was cloudy with occasional light rain.  Having been downtown I decided to drive east to visit the so called Palace of Purification.  Otherwise known as the R. C. Harris Filtration Plant.

Roland Caldwell Harris became Toronto’s Commissioner of Works in 1912.  One of Harris’ first projects was the Prince Edward Viaduct which spans the Don River and connects Bloor Street to the Danforth.  Harris’ vision for the bridge included adding a lower deck for rail transport.  It was an addition that saved the city millions when the TTC opened the Bloor-Danforth line in 1966.  In 1913 Harris presented a vision for the Toronto Water Works Extension which was basically clean, safe drinking water for everyone.  The project got delayed due to the First World War and subsequent budget restraint. The city by-law to expropriate the Victoria Park site was repealed and the land didn’t come under city control until 1923.  When Harris saw the drawings for the buildings in February 1928 he declared them to be plain and unattractive.  The reworked design is what we have today and was recognized in 1992 as a National Historic Civil Engineering Site.  It is a grand civil structure built in the popular Art Deco style and set in a terraced park.  Built between 1932 and 1941 it had a major addition in the 1950’s.

Lake Ontario has about 1% of the earth’s surface fresh water.  It is Toronto’s only source of drinking water, but unfortunately, is frequently polluted by run-off and waste.  For this reason Harris envisioned an intake well out in the lake, 2.6 km from the shore.  Water is then bought in through the centre of the site by the pumps in the pump house.  Built in 1935 this building is the closest to the lake.

Inside the pump house the original pumps remain. 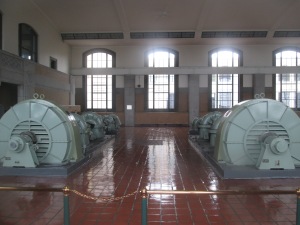 Outside, the swallows have built dozens of nests in the shelter of the stonework.

The service building with it’s alum tower stands just north of the pump house.  Water passes under the alum tower on its way to the filtration plant on the next terrace up the hill.  Alum is dropped into the water to help contaminants floc so that they will drop to the bottom of settling pools or be more easily filtered out in the filtration plant. 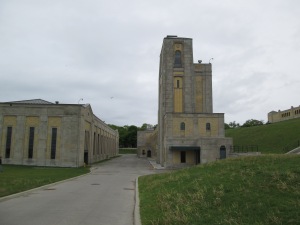 The picture below shows the terrace with it’s niche and bronze fountain.  Harris designed his architecture to be viewed and this is meant to be lined up with the long filtration plant on the terrace behind.

The main entrance to the filtration plant.  A stylized TWW (Toronto Water Works) adorns the wood right above the main door.  It also appears on either side of the arched windows.  The wing on the left was built in 1932 and was in use when the plant opened in 1941.  The wing on the right was added in the 1950’s.  Unlike most public buildings, the style wasn’t changed with the addition as a means of cost cutting.  Harris had supplied pipes and connections so that capacity could be easily doubled to nearly 1 billion litres per day.  Inside this building are 40 filtration beds where water is cleaned before being pumped to a network of reservoirs and water towers throughout the city.

Inside the filtration plant.  It’s no wonder it got the nick-name Palace of Purification. 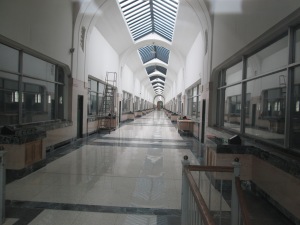 Along the front of the facility there is a seawall that meets Lake Ontario.  It has a curved lip at the top to direct large waves back into the lake. 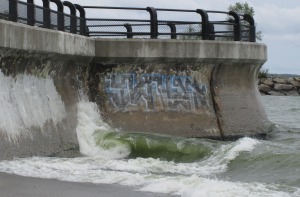 Just to the east the mouth of a storm drain opens onto the beach.  The concrete slabs that look like teeth are disipators designed to release energy from the water before dumping it on the beach. 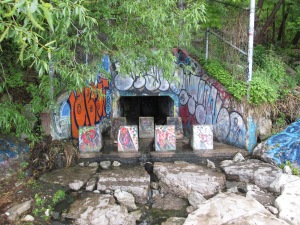 Early Toronto had several grand parks that attracted people out for an afternoon’s leisure. Victoria Park was set on rolling hills at the water’s edge at the end of the street that bears its name. In the late 1870’s ferries from downtown began bringing passengers to enjoy the gardens. There were different rides available such as a steam powered carousel, donkeys and tethered balloons. A small zoo, dancehall and waterfront trails along with tight-rope walking displays completed the attraction to the park. It was bought out in 1899 and for a while there was an outdoor school and camp operated here. In 1927 the city bought the site and later chose it for its new water filtration plant. Aerial photos show a building on the beach at the east end of the site that was already in disrepair in 1947. By the 1980’s it had been demolished leaving only a few walls standing. The shot below looks out through a second story window opening onto the foundations on the beach below. 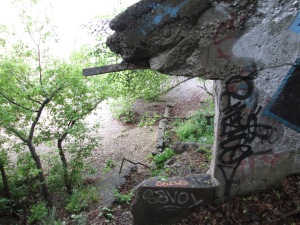 Meant to be viewed from the lake, the R.C. Harris Filtration plant can be seen with the 10 bays of the east wing stretching out to the right. 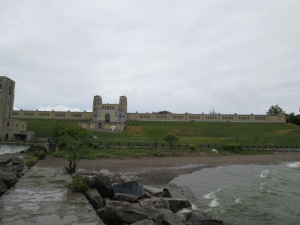