Toronto was experiencing a building boom in the 1880’s and land speculation was rampant.  A plan was put forward to develop a commuter railway to service new communities that would be opened for development.  By 1892 the rail line was up and running with 44 stops and one grand showpiece station.  However, a recession slowed the growth of the city at that time and the riders never arrived.  After only 28 months the passenger service was suspended and the line was used mainly to service industrial establishments for the next century.  The original line has since been cut into three sections, severed by Mount Pleasant Cemetery and Allen Road.  The archive picture below shows one of the period flyers advertising the railway.  The picture includes a sketch of the train crossing the bridge on Yonge Street.  This bridge is one of two originals remaining on the line and is featured as our cover photo.

Previously we explored both the northern section and the southern one.  Links to both of these are provided at the end of this story.  Much of the history of the railway is contained in the two previous stories and therefore I won’t cover it again here.  I parked on Newgate Road near Elm Ridge Drive to investigate the middle section with the plan to hike the 4 kilometres from Allen Road to Mount Pleasant Road.  This section of trail passes through Forest Hill which it was designed to serve in the days before personal automobiles. The trail was hard packed with ice and snow and the sunshine and mild temperatures were starting to melt everything.  Footing was slippery today but most of the year there is a hard packed gravel surface.  Although I saw plenty of evidence that the trail is used by dog walkers I didn’t see any other pedestrians until I reached Eglinton Avenue after which it was quite busy.

Along the trail are several places where someone has been leaving seed for the birds and squirrels.  As a result, the squirrels have no fear of people and sit up to see what treats you may have.  In the wild a grey squirrel has a very short lifespan living for only 11 or 12 months.  In captivity, they have been noted as living up to 20 years.

This is one of my favourite trails in the heat of the summer.  There are many places where the trees stretch over the trail from both sides making the trail well shaded.  It also has a grade of less than 4 percent which is typical for railways. Therefore there are no hills to climb in the heat of the day.  This is a multi-use trail and a speed limit of 15 kilometres per hour has been set so that cyclist won’t impact the enjoyment of dog walkers and people out for a casual stroll.

The trail is well used by people walking their dogs but, unfortunately, there are many who do not clean up after their pets.  Both sides of this trail are covered with dog faeces to the point where you can hardly step between the piles in some places.  In colder climates, it can take up to a year for dog faeces to decompose, longer if the animal is eating primarily meat.  From an environmental standpoint, it is better to buy “flushable” poop bags rather than nonbiodegradable ones that sit in a landfill for years.  Either way, please remember this stuff doesn’t melt along with the snow.

The Eglinton Avenue bridge over the Beltline railway has been replaced with a modern concrete structure when the road was widened.  This was the site of the Eglinton stop on the railway and the artwork on the underside of the bridge portrays some early railway scenes. 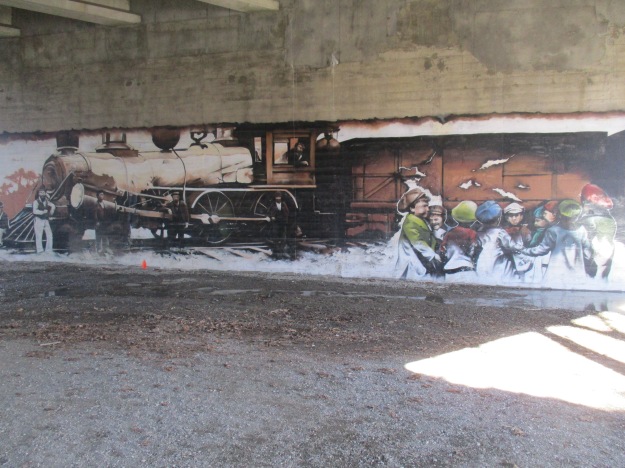 Some of the stops on this early commuter service can still be clearly seen along the trail. There are places where there is an open space on either side of the tracks where a walkway or set of stairs provide access to the adjacent community.  Many of the stops on the railway were simply whistle stops and the train only stopped if passengers wanted to get on or off. The first one of these south of Eglinton is the site of today’s Robert Bateman Park. A renowned Canadian Artist, Robert Bateman spent his childhood exploring the beltline before it was reclaimed as parkland.  The picture below shows one of these former stops on the railway.

Kay Gardner was a city councillor who in 1990 lobbied the city to buy the abandoned beltline lands for use as a linear park.  In May of 2000, the park was renamed Kay Garner Beltline Park in her honour.  The railway has been stripped of most of the clues to its former use.  A typical railway right of way is 100 feet wide.  This strip of land can be seen running between the two fences that border the trail.  In some places the rail bed can be seen as a raised berm and in others a cut embankment reveals the rail bed.  The picture below displays both.

Since opening the trail the city has been busy restoring the strip of land.  Newly planted trees line the rail berm near Avenue Road.  Each new tree has a green treegator bag around the base.  These bags serve as water reservoirs for the transplanted trees.  They help reduce the shock to the tree and each bag holds 15 gallons of water.  They need to be filled about once per week.

The trail crosses over the Davisville Subway Yards before it reaches Yonge Street.  When the TTC opened its first subway line in 1954 it ran between Union Station and Eglinton. The Davisville yards were the main carhouse and maintenance shops for the subway cars.  The first two subway cars were delivered to the Hillcrest Complex but after that, new cars were delivered to the Davisville yards via the Beltline Railway.  A temporary interchange was built on the north side of the Yonge Street beltline bridge.  These yards were used to store all TTC subway trains between 1954 and 1966 when the larger Wilson Yards were opened.

The rail bridge on Yonge Street is one of two original structures remaining on the line.  The other one is located over Dufferin Street.  From 1970 until the 1990’s this bridge was closed to pedestrian traffic.

The trail continues east from here across the top of Mount Pleasant Cemetery.  Turning south the trail reaches Moore Street which was the site of the elegant Moore Park station.

Other Sections of the Belt Line:  Moore Park in the south and York Belt Line Trail in the north.