Family Day in Ontario seemed like a good opportunity to get out and walk around Lakefront Promenade Park.  The park is operated by the City of Mississauga and Credit Valley Conservation Area.  It is 40 hectares in size and has marinas with slips for 170 boats.  Just to the east of the park was the Lakeview Generating Station.  It was commissioned in 1962 and operated for 43 years.  After it closed in 2005 it wasn’t long before it was demolished.  The four chimneys were known locally as the four sisters and they were demolished on June 12, 2006.  On June 28, 2007 the rest of the building was demolished.  The image below was taken from Wikipedia. 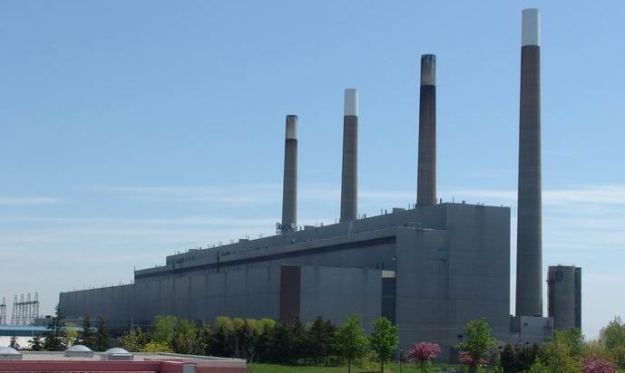 The site of the former generating station is now undergoing restoration which will eventually allow it to be developed.  A mixed use community is planned which could contain up to 20,000 people as well as having employment, commercial and parkland uses. 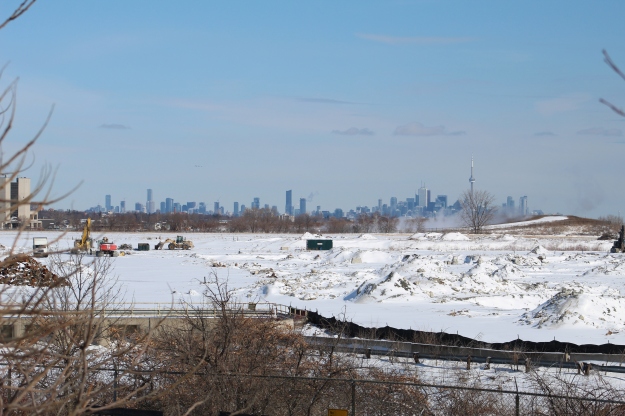 Barn swallows traditionally nested in caves but have adapted quite well to human built structures.  They became very common in barns throughout the province.  Now that the number of barns has been greatly reduced, the barn swallow has been listed as a species at risk.  The park has constructed these mini barns to encourage nesting because the swallows are important in controlling the mosquito population. 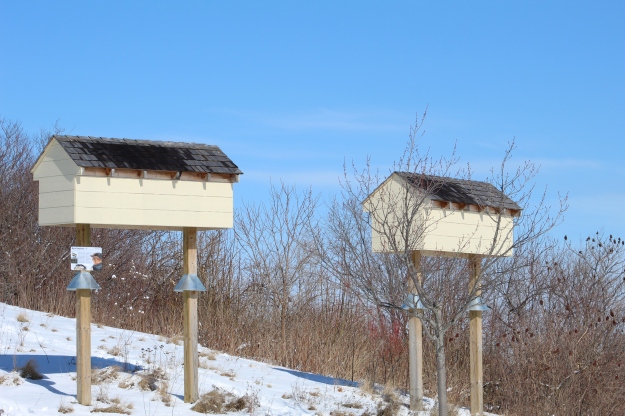 Lakefront Promenade Park has a splash pad for the children to enjoy on the warmer summer days.  It didn’t seem to be too popular on this sunny afternoon.  The water is activated when kids are under one of six play spouts and then is drained into a nearby wetland.  This allows the water to be filtered naturally before being released into the lake. 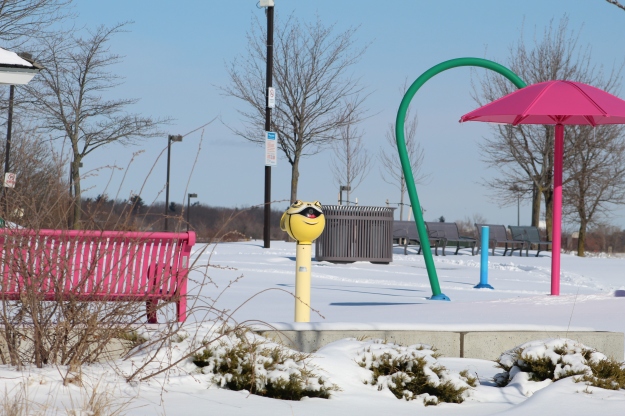 Waterfowl are far more likely to spend the winter in the GTA than they were twenty years ago.  The open water attracts swans, geese and several types of ducks. 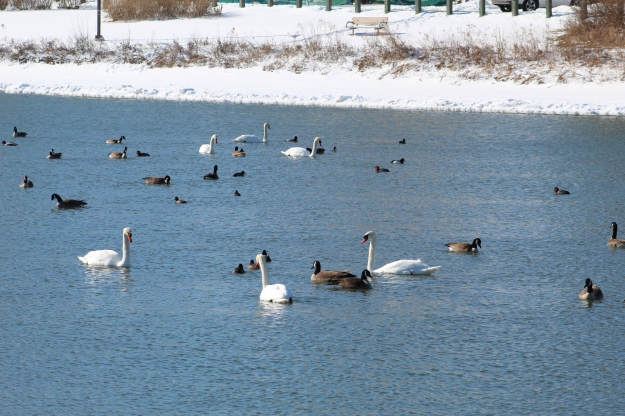 Several times we observed  flocks of seagulls all in neat rows.  Of interest was the fact that they all stand facing the same direction to take advantage of the sun.  The seagulls in this picture are mostly asleep, their heads tucked up underneath their wings. 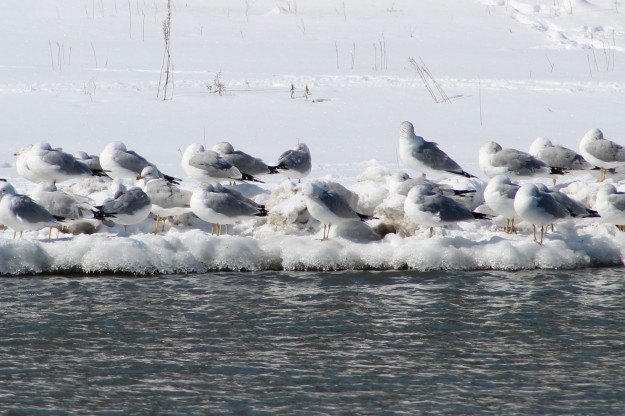 This flock of seagulls was standing on the end of the dock where Canada Customs operates an inspection station.  These birds had all been facing the same way and when they flew, they all took off in the same direction. 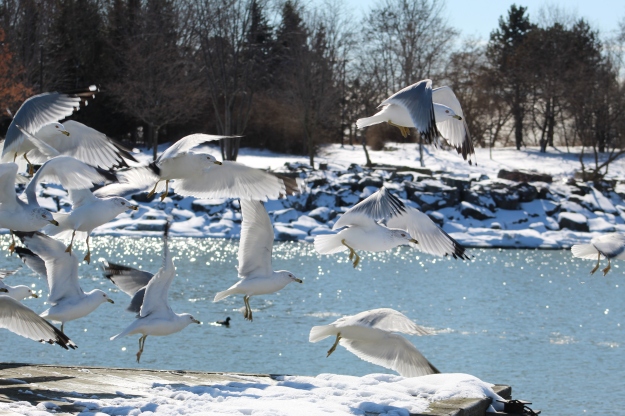 The trees around the shoreline were coated with a layer of ice from the spray coming off the lake. 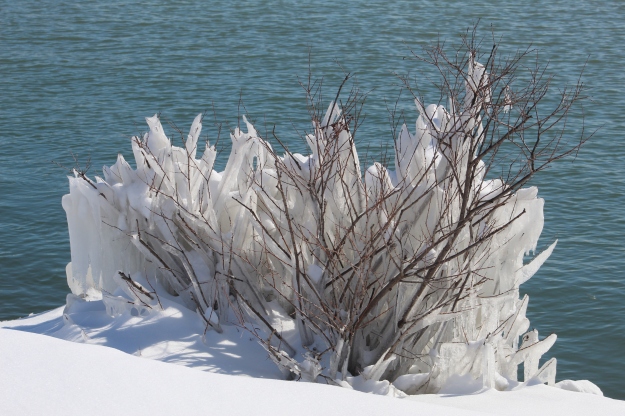 Barn swallows build simple cup shaped nests out of mud.  They like to attach them to course wood surfaces.  These nests can take up to 1000 trips to build, carrying a small amount of mud in their beak each time.  All this work makes it practical for the birds to return to an old nest for another season. 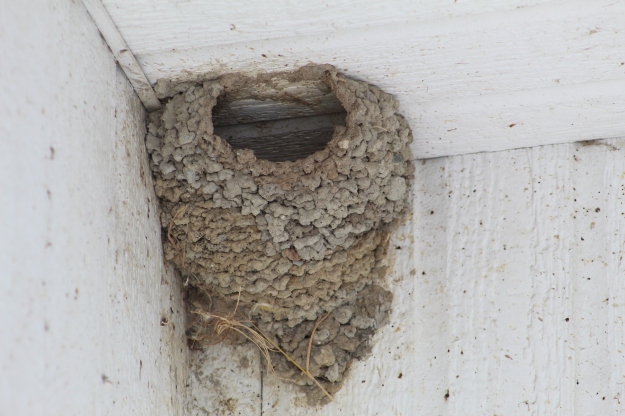 Looking to the west you can see the Ridgetown, a ship which is partially sunk in the Port Credit harbour.  It forms the outer portion of the break wall at the mouth of the Credit River.  The story of the Ridgetown can be found at this link. 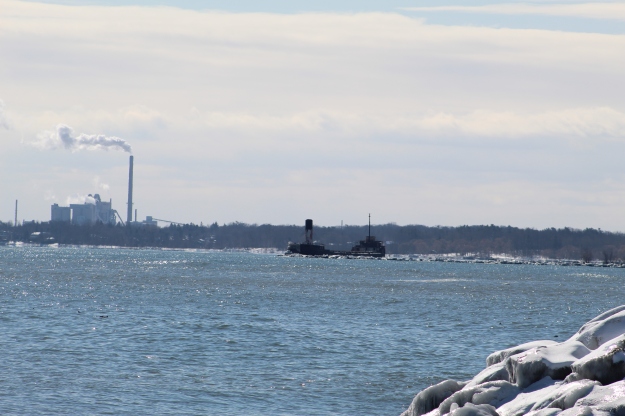 The walking was often tricky because there was a hard layer of ice below a couple of inches of loose snow.  We found a group of people taking advantage of a small slope to slide downhill on their boots.  Just past the final parking lot there is a short break wall that protects the marina.  As we approached the break wall we found a lady on the ground.  She had slipped, fallen and was convinced that her leg was broken.  Her husband was waiting in their vehicle and so my brother went first to retrieve him and then returned to the parking lot to direct the paramedics.  Meanwhile I waited with her and called 911.  Due to the ice underfoot it took all five of us to get her onto the stretcher. 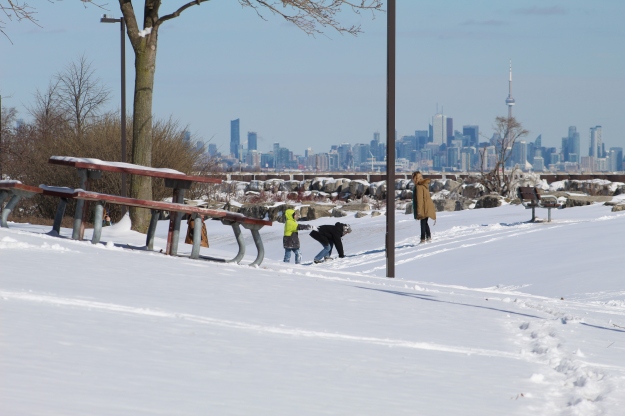 The marina is being kept open by use of under water pipes that keep the water moving.  It keeps the water from freezing over and makes an interesting pattern on the surface. 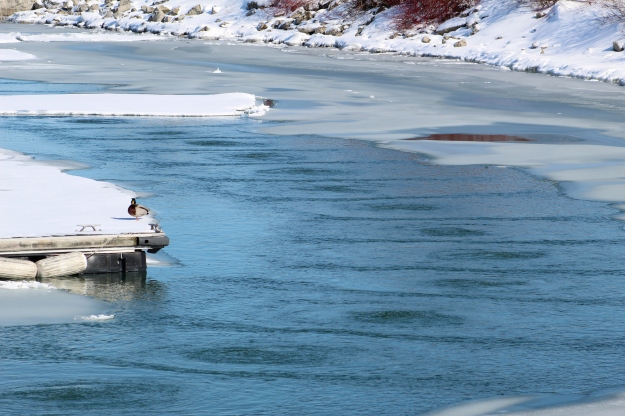 The break wall that extends out from the east point is quite long compared to the western one and has a small light house on the end. 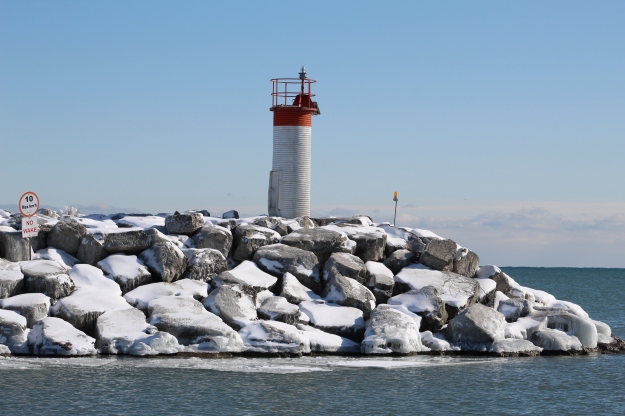 We watched a swan that was sitting on the ice in the bay.  As we watched it took flight and came toward us.  The cover photo shows the swan as it prepares to land.  The picture below is the very first point of contact as it touches down. 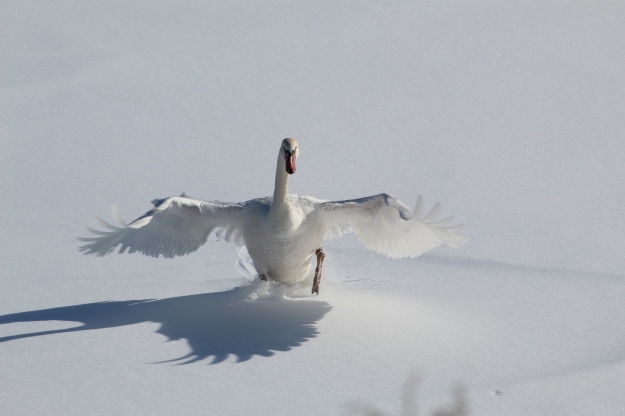 We often think that places we visit would be nice in another season so perhaps we’ll return to this one some day.