It has been four years since we presented this story and today it would no longer be possible to visit the site.  The current owners have elected to clearly post it.  We present this for it historical value because it is rather unique in the early development of Ontario. – October 1, 2019

In 1863 a survey discovered Medina sandstone in the Caledon hills and soon a plan was put together to market it. The Credit Valley Railroad was chartered in 1871 with the purpose of building a line to access the mineral wealth in the area. The CVR was completed in 1879 along with several spur lines to reach local quarries.  By 1883 the CVR was absorbed into a growing network of rail lines belonging to the Canadian Pacific Railway. Along with spurs, sidings and rail bridges a railway station was built near the hairpin curve on the Forks of the Credit road. To gain access to the stone located in quarries on the Cox Property and the surrounding area,  the railway undertook to construct an aerial tramway. Large pieces of cut stone were lifted off the hill top quarries and carried to the rail line near the station. The Caledon Aerial Tramway opened in 1900 and was in operation for only about 10 years. After the quarries closed the hills were allowed to regenerate with forest cover.

In the late 1800’s The Big Hill Quarry opened on the east side of the Credit River on the top of the escarpment. The quarry site covers 66 acres overlooking Dominion Street. It was an active quarry until about 1910 and was the site of one end of the aerial tramway. The picture below shows the stone pads where the tramway was constructed. Steel anchors can be found throughout the area. To the left is the steam boiler that generated the power that moved the lift on the two inch steel cable. 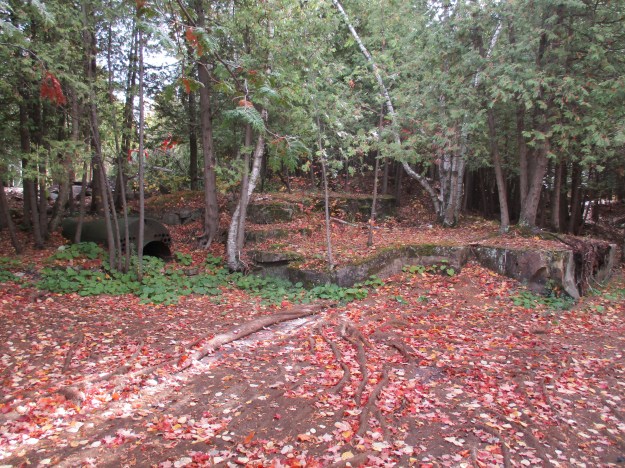 Holes mark the openings where the smoke stack and steam chambers used to stand on top of the steam boiler. As can be seen in the cover photo most of the flue are still in place inside. The boiler is similar to ones used in locomotives built around the same era and the CPR simply employed it’s existing technology in another use. This boiler is a rare example of late Victorian Era technology resting in situ.

Six steel anchor bolts, in two sets of three, remain just to the right of the boiler.

Various steel hooks, eye bolts and anchors remain in the stone around the pond that formed in the old quarry. 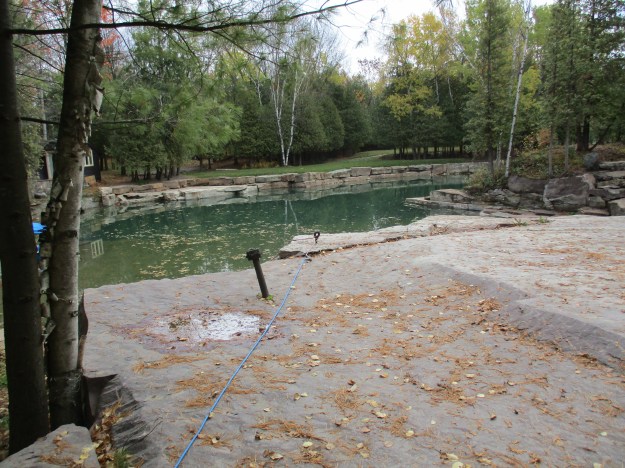 A large steel post remains set in the stone near the steam boiler. 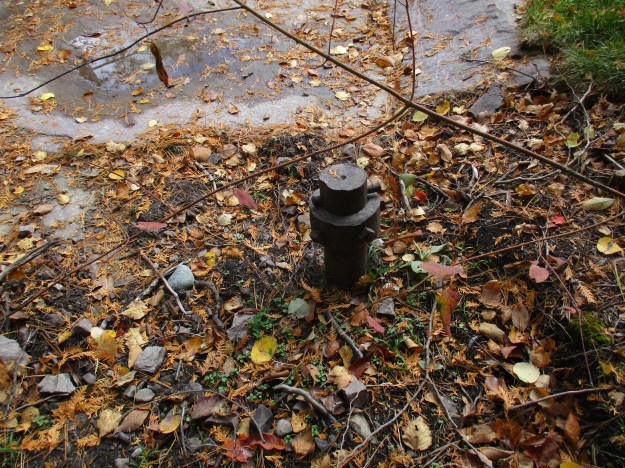 This picture from 1890 shows one end of the aerial tramway.  Our Health and Safety people would have a field day with the guarding on that machine. 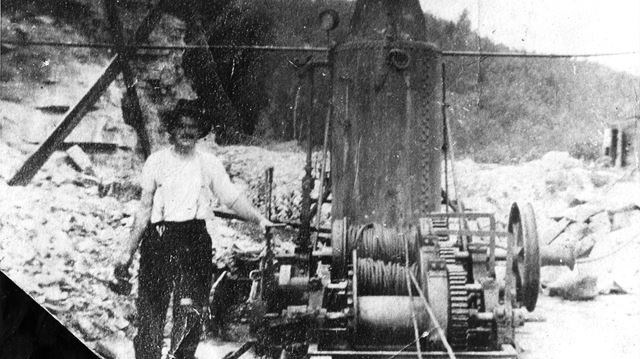 The remains of the Caledon Aerial Tramway are hidden away on private property, at least for the moment.  Here’s hoping another property owner could allow a trail to visit the site.  The receiving end of the tramway was on The Cox Property and you can see some of the two-inch thick cable that we found over there.