Schomberg sits on the northern edge of the GTA in King Township.  The community got its start around 1830 when John R Brown emigrated from Pennsylvania to the area and settled on lot 26 in the 9th concession.  Three of his brothers also arrived in the area over the next couple of years, taking up adjacent farms.  The earliest name for the town was Brownsville but residents had to go to nearby Lloydtown for their mail so they applied for a post office of their own.  That was 1861 and the application was denied because there was already a Brownsville post office in York County.  The following year the name was changed to Schomberg, after The Duke of Schomberg, and the post office was finally opened.

An orange grain elevator stands on the side of Highway 9 close to Highway 27 that used to have the Shur-Gain symbol on the side.  Shur-Gain was introduced in 1937 as a brand name by Canada Packers.  They provided feed for animals and livestock.  Today there appears to be renovations going on at the old feed mill.

Schomberg developed a little west of the road that we call Highway 27 today on a small given road.  The town retains many of its historical buildings and so I parked and went for a walk.  Although the Shur-Gain feed mill on Highway 9 might be better known to people who pass by on the highway there is an older feed mill in town.  In 1884 Anderson Tegart built the Schomberg Feed Mill on Main Street where it had direct access to the railway.  It operated until 1927 before it shut down.  Since that time it has housed a variety of businesses including The Scruffy Duck Restaurant which is still in business.  The cover photo shows the feed mill from the south view in contrast to the view from the north presented below.

Beside the old feed mill is a small house built in the year of Confederation that belonged to one of the town doctors.  Harry E. Vaux would have served the community out of his home rather than some office in a clinic when he wasn’t visiting the homes of those who were too sick to come to him.

Schomberg has done a great job of identifying their historic buildings.  Most of the buildings on Main Street and along Church Street have little plaques attached giving the date and historical uses. 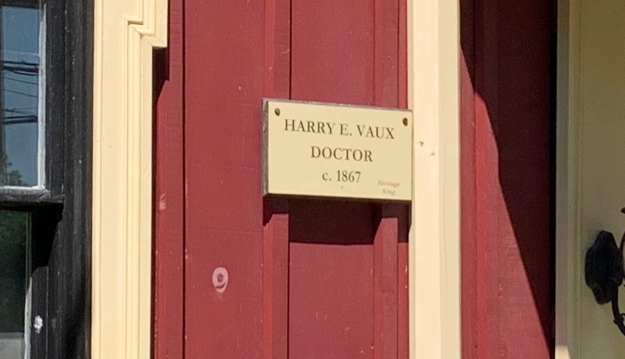 In 1905 you would have been able to walk into this building with the false front and purchase your family meat from Adam J. Smart who was the butcher at that time.

The first commercial bank in Schomberg didn’t arrive until 1902.  That was the year that the Trader’s Bank of Canada opened a branch in town.  The bank was headquartered on Yonge Street in downtown Toronto and would later become part of the Royal Bank of Canada.  The Traders bank opened in the left half of the building featured below.  The right side of the building had a grocer and general merchant in it, Wm. Leeson McGowan was proprietor of the store in 1924.

The Schomberg Agricultural Society had been meeting since 1851 and was very active in the lives of the local farmers who were served by the town.  Schomberg was well known for its produce and drew people from miles around for its farmers market.  In 1907 the Market Association was formed and they built a community hall which was used as a market.  In 1922 they added a second story to serve as a full time community hall.  The hall is currently being upgraded to make the second floor accessible and restore some of the worn out infrastructure in the building. 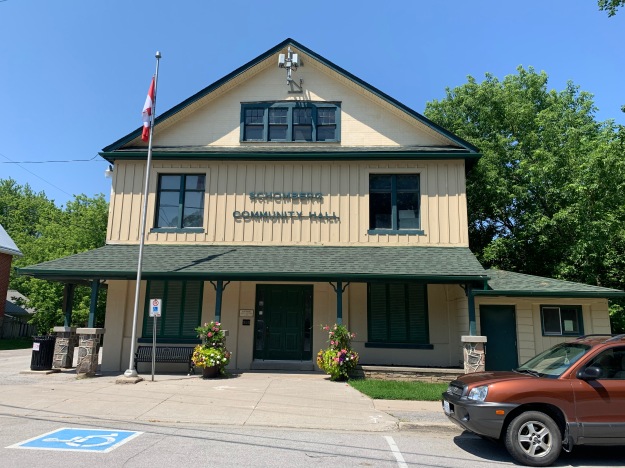 At one time Schomberg had its own railway line, the Schomberg and Aurora Railway which was intended to open the successful produce markets up to a larger customer base from Toronto.  It connected to the Toronto & York Radial Railway with construction beginning in 1899 at Bond Lake.  The railway operated from 1902 to 1927 bringing people to town who would have visited the markets in the community hall.   A little pathway beside the community hall building leads into the fair grounds where I found a clever use for a repurposed shipping container.  By taking the ends out it has quickly become a covered bridge over a small waterway. 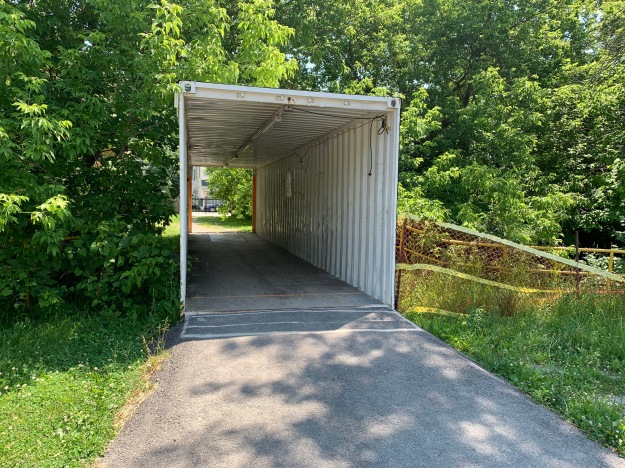 It’s hard to say what will happen to the fall fairs across Ontario in 2020 with the threat of an ongoing pandemic but it might be fun to visit the one in Schomberg sometime.  The fairgrounds were pretty deserted on this hot morning. 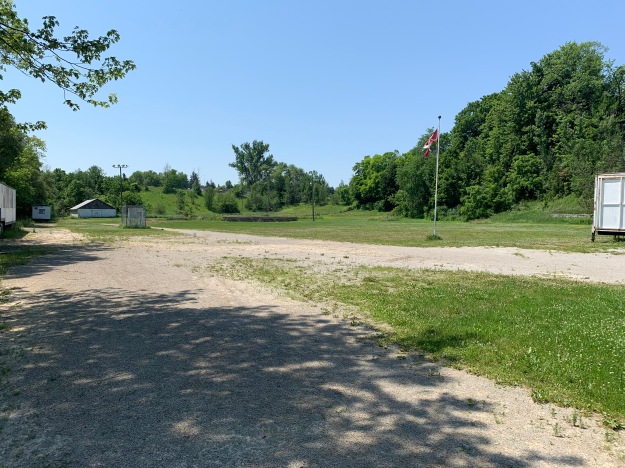 The Baptist church in Schomberg had stopped using their building and left it vacant on Main Street.  Meanwhile, about three and a half miles away a Presbyterian congregation had been meeting since 1891 without a building of their own.  In 1907 it was decided to purchase the old church and dedicate it for their use.  They held their first services in June 1907 and continue to meet there at the present.

The archive picture below shows the old Baptist Church (now Presbyterian) and the community hall at the time before the second floor was added to the hall.  This is apparently from a postcard from the 1910’s.

Fred and Emma Sparling ran a bakery and confectionery on Main Street in the 1890’s in this building with the cute little quarter round gable windows.

Levi Denis was the town miller in 1875 and lived in this two story home.  The ground floor has five bays while the second story has only three sets of windows.  This lack of symmetry suggests that the second floor may have been added at a later date.

Just around the corner on Church Street is the old home of one of the town blacksmiths. This story and a half house was built in 1891 for James A. Kitchen and has some interesting patterns in the brickwork.  James and Elmira had a son named Percy who served in the First World War and then returned to live with his parents in Schomberg where he also took up the blacksmith trade.

Garrett Brown was one of the four founding brothers who started Brownsville and he built this house on Church Street in 1871.  He owned several businesses and opened the first bank on Main Street in 1885.  His bank didn’t face competition from the larger chartered banks until 1907 when the Traders Bank arrived.

Church street continues out of Schomberg and into Lloydtown which is another interesting little rural community with a unique heritage.

Here’s the link to our story on the Toronto & York Radial Railway. and the one about Bond Lake.