It was a cloudy day, threatening sunshine, and just around the freezing mark.  We parked in Jeff Healey Park on Mimico Creek.  Jeff Healey was a blind Canadian Jazz/Rock guitarist and singer. Jeff grew up on Bonnyview dr. just across from Woodford Park where he liked to toboggan in the winter.  After his death to cancer in 2008 the city renamed the park in his honour.  Efforts are currently underway to redevelop the park into a disabilities friendly park which will include large scale musical instruments for the local children to jam together on.

The name Mimico comes from the Ojibwe word that means “pigeon”.  The passenger pigeon, after which the area is named, was considered to be the most numerous species in the world at the time that Europeans came to North America.  Today they are extinct.

William Gamble, who later operated the King’s Mill (now Old Mill), opened a saw mill on Mimico Creek, giving rise to the town of Mimico.  It was initially comprised of three estates or land grants.  We started off on the west side of Mimico Creek.  Mimico creek is cut through layers of shale.  This shale is full of fossils and we found the fossil plant in the picture below.  This fossil is standing up and passes through several layers of shale deposits.  This is known as a polystyrate fossil.  This makes it appear to have been lucky enough to stand up for thousands of years without rotting while the rock formed around it. 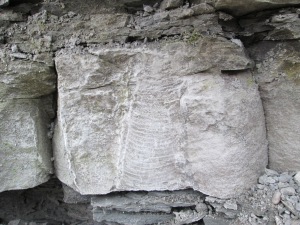 We crossed the creek on a series of stepping stones.  A bush of large oak trees grows along the east side of the creek just north of here.  Both white oak and red oak grow in abundance.  The red oak in the picture below was split into two main trunks as were most of the local examples. A hole in one of the trunks has been taken over for a home by some lucky squirrel.  A large fungus provides an awning over his doorway.

On Sept. 6th when we visited Riverside Park in Streetsville we described the Goldenrod Gall Fly and it’s life cycle.  Finding two goldenrod galls on the same plant stem is rare but the picture below shows an even more rare triple gall.

One of these plants was broken down and so we investigated the gall on it.  Just before winter the gall fly chews an escape route for the following spring.  This leaves a soft spot on the outside where the gall is chewed almost to the outer skin.  Breaking the damaged one open revealed the little insect inside.

Mimico Creek appears calm and perfectly clear today.  When it floods it races down the creek valley carrying rocks and trees with it.  Along the west shale bank the creek has thrown up a three foot high wall of stones.  It can be seen as the whiter rock just above the water line.  The cover photo shows a picture of the creek at a point north of here where there has been an old dam or flood control built in the creek.

Common Mullein is a biennial plant, meaning that it takes two years to mature.  The tall thin stalks stand out among the other field plants.  The stalks contain a core that is light and dry and perfect for tinder to start a fire in an emergency situation.  Even in the rain or winter snows the insides of these plants can provide a dry source of fire starter.  The stalk is often used as a hand drill to create friction to start a fire with.

This is a first year common mullein.  The leaves are soft and pliable, rounded at the ends and fuzzy.  These leaves are unique and no other plant in Ontario has similar leaves.

Life is tenacious as this tree bears witness.  It clings to the side of the shale embankment by a massive system of roots. 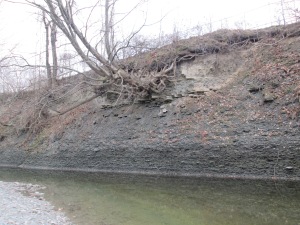 A brick factory was founded in Cooksville in 1912 under the name of the National Brick Company.   After changing names several times it became Domtar (Shale Division) in 1953.  The site was closed down in 1991 but produced a brick that became known as Canada Brick.  Along the side of the creek we found a sample. 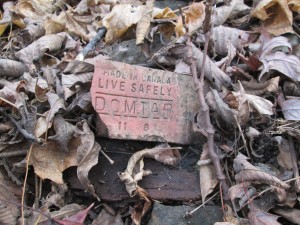 The brick works as it appeared in 1983 at the north east corner of Dundas Street and Mavis Road in Mississauga.  Filled in, the site is now home to a Home Depot, grocery store and townhouse development.