The trail that leads south from Dunby Road is restrained by fences on both sides.  Along these fences there is extensive Virginia Creeper growing.  It is a member of the grape family but the Greek name for the plant means “Virgin Ivy” from which the name Virginia Creeper is derived.  It can reach heights of up to 30 metres climbing by the use of sticky tendrils sometimes completely covering the tree that is supporting it.  It is one of the first plants to start showing red leaves in the fall.

Hockley Valley Resort was a small operation in 1985 when it was purchased by the Adamo Family.  Under their management the 28 room hotel was transformed into a world class resort, spa and ski facility.  There are 15 runs and from the start of the trail we had a good look across the valley at them.  As we returned to the car at the end of the hike we found that we had made it almost all the way to the resort.  Some of the ski runs can be seen in the picture below.

The Gem-Studded Puffball has a a dual layer of spines on the fruit body, one shorter and one longer.  The longer spines detach easily leaving a scar on the surface of the mushroom.  The base is often elongated and sometimes looks like a stalk.  This little fungus looks kind of scary but is said to be a choice edible.  Like any puffball there are look-a-likes that are not edible.  The test is to cut the mushroom in half and ensure the flesh inside is undifferentiated and that there is no sign of gills.

Yellow Tuning Forks grow from August until November and have a gelatinous texture unlike the brittle corals that look similar.  These jelly fungi are also known as yellow false coral and grow on primarily on pine logs.  They can reach up to 10 centimetres in height which is tall for a slime mushroom.  They can be eaten but their texture and lack of taste make them unattractive for foragers. 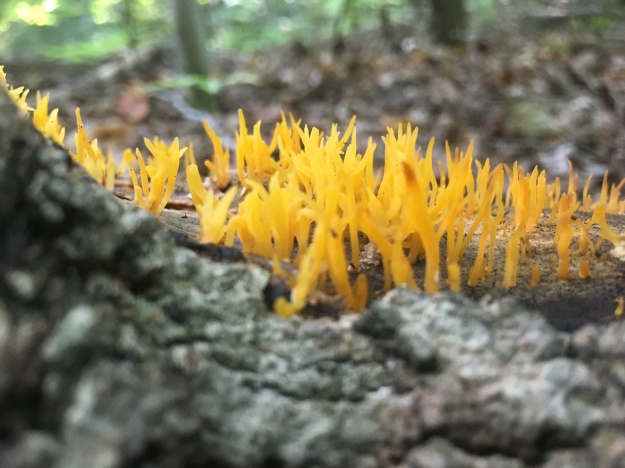 Northern Tooth Fungus grows primarily on sugar maples.  It gets into the heart of the tree and rots it from within.  These shelf fungus grow annually until the tree is hollowed out and is blown over in a strong wind.  These polypores have long tubes underneath that disperse the spores. 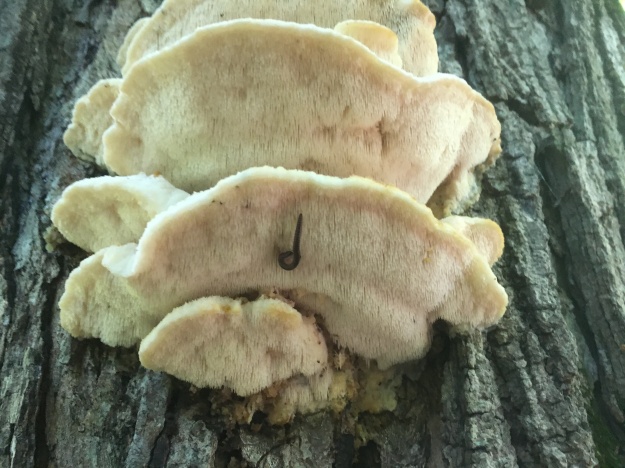 Dead Man’s Fingers has to be one of the most unusual names for a mushroom.  Sometimes they grow in small clusters which look like a hand reaching up through the ground.  They grow on stumps of maple and beech trees and are whitish in the spring becoming hard and black as the summer progresses.

Coho Salmon are native to the Pacific Ocean but have been introduced to Ontario and are now naturalized here. When the Europeans arrived in Ontario the salmon crowded the rivers every year.  They spend most of the year in the cold waters of the Great Lakes and return to the rivers and tributaries every year to spawn.  It didn’t take long to destroy the habitats with pollution and to block the spawning routes with mill dams.  The salmon population was decimated and in 1969 it was decided to stock Lake Ontario with Coho Salmon.  Since then all the Great Lakes have been stocked with Salmon and each fall they can be seen fighting their way through the shallow waters of the streams to reach their spawning areas.

The trail winds through the woods following a couple of ravines.  There are several little bridges that it uses to cross tributaries of the Nottawasaga River.  The largest one carries the water that has come over Cannings Falls which we didn’t visit because it is on private land. 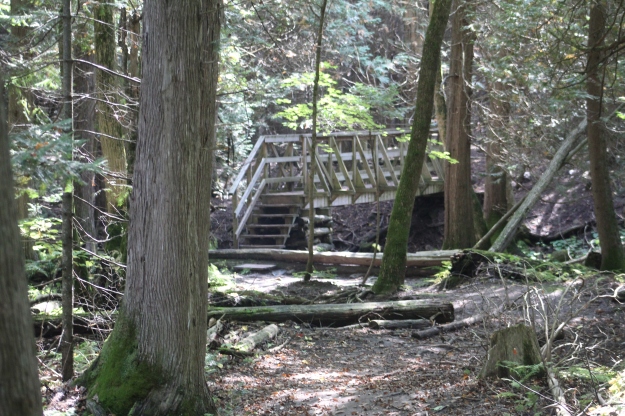 Wolf’s Milk Slime is similar to a small puffball in the method of spore release.  They will develop a small hole in the top for the distribution of their spores when they are ready.  When this slime first appears it has the consistency of paste but it becomes powdery as the spores mature.  It is also sometimes called Toothpaste Slime.

Nearly 2 kilometres from Hockley Valley Road are the remains of a 1939 Chevy Sedan that are being slowly disassembled and removed.  The property belonged to Dennis Nevett who owned and farmed it until 1974 when he sold it to the government for the creation of the Hockley Valley Provincial Nature Preserve.  The family used the sedan from about 1951 until 1959 when it died.  Over the next year or two it was towed to the back corner of one of the fields and left to rust away.

Pretty much everything that can be removed has already been stripped off of the car.

The Jeju Olle walking trail is the most popular hiking trail in the country of South Korea.  It has over 200 kilomtres of trails that work their way around an island up to the brim of an extinct volcano.  In September of 2011 a section of the Bruce Trail in Hockley Valley was twinned with the Jeju Olle Trail.  To mark the start of the twinned section there is a blue pony which is the marking system used on the Korean Trail.

This trail promises to be very beautiful in the next few weeks when the fall colours are at their best.