I parked on Russell Hill Road near the entrance to the St. Clair reservoir to enjoy the sunshine and a rare Friday off work.  Nordheimer Ravine runs just south of the reservoir.  I had been introduced to the ravine while exploring the Baldwin Estate known as Spadina.  The toponym (place name) ‘Nordheimer Ravine’ appears to have been in use since at least the 1940’s.  Castle Frank Brook ran through the ravine across Baldwin’s property and then through Samuel Nordheimer’s estate.  A brief history of Nordheimer was also introduced in the Spadina post. Samuel Nordheimer had married Edyth Boulton in 1871.  He built her a grand estate he called Glenedyth, after the forest glen where it was set and her name.  In the process he demolished the 1818 home of Russell Hill leaving just a street name to remember the original landowner by. The gatehouse of Glenedyth is featured in the cover photo.  Nordheimer died in 1912 and his son Roy inherited the estate.  When the son died in 1921 a subdivision plan was approved and the estate commemorated in the street names Boulton and Glen Edyth.  Roycroft Drive, named after Roy, was also one of the streets in this 1923 plan but was closed to traffic in 1971.  The trail from the reservoir to Boulton Drive roughly follows this old road allowance.

Following Castle Frank Brook brings you out to Boulton Drive where the brook flows under a row of houses.  The brook itself was buried in a sewer pipe around 1930 to facilitate development of the subdivision.  The edge of the ravine can be seen in this picture with the brook flowing out from under the houses to the north and under Boulton Park where I’m standing. 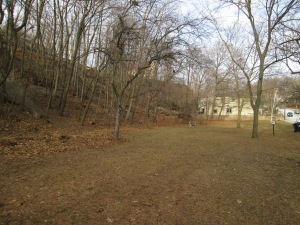 Samuel Nordheimer dammed the brook on his property to create a pond for the garden setting of his estate.  In 1874 the town of Yorkville refused to buy water from the City of Toronto and entered into an agreement with Nordheimer to buy water from his pond.  A combined Pumping house and engineer’s house was built in 1875.  The water in the pond became so foul that the drinking water in Yorkville became a problem.  In 1883 the town voted to be annexed by the city of Toronto in order to gain access to potable drinking water.  The pump house was integrated into the the city water plan and renamed High Level Pumping Station.  High Level referred to both the station’s position on top of the Iroquois Bluffs and it’s function of pumping water to the higher elevation area’s of the expanding city to the north.  The first pump house remains today as a private residence. 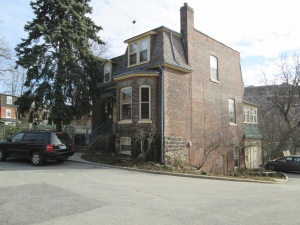 The pumping station expanded with the growth of the city with major construction in 1889 (now demolished).  A large central block was added in 1906. 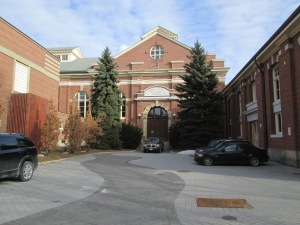 The 1910 expansion with it’s ornate yellow brick pattern on the top of the building.

The 1952 expansion was the final one.  The High Level Pumping Station has taken on a role as the nerve centre of Toronto’s water system.  It controls the water from 4 water treatment plants, 18 pumping stations, 10 underground reservoirs and 4 water towers.  These in turn supply water to over 3 million people.  It has come a long way from it’s inception as the Yorkville Water Works.  The 1952 expansion is seen in the picture below.

The 1953 aerial photograph below shows area that once belonged to Samuel.   The Nordheimer Ravine comes out of the top left corner. Someone has marked the Castle Frank Brook sewer pipe in a brown marker where it flows between Glen Edyth on the left and Boulton on the right.   The brook itself used to wander back and forth across what became Boulton Drive.  The black circle at the bottom centre is Nordheimer’s pond with it’s fountain in the middle.  The first pumping station is the small building right at the edge of the pond at “one o’clock” if the pond were a clock face.  The new pumping station and it’s additions are at the top of the pond at “twelve o’clock”.

Samuel and his brother Abraham will be remembered for their contribution to music in Toronto more than to the water supply.  The Nordheimer piano was considered a local masterpiece in the 19th century.  The program below is for a concert in St. Lawrence Hall on February 19th 1862.  The first note below the agenda proudly informs everyone that “The piano used on this occasion is from Mssrs. A & S Nordheimer’s Ware-rooms.”

Access covers have long been dated and I found the oldest one in my knowledge on the High Level Pump Station propery.  This cover was installed at the time of the 1910 expansion.