The town of Bolton has an interesting past that developed along the Humber River when the mills began to arrive.  To help commemorate this they have developed the Humber Heritage Trail along the river.  The trail extends from the Trans-Canada Trail at Humber Station Road near Albion Hills Conservation Area through to Kleinberg.  It will cover 33 kilometers when it is completed and there is free parking in Dick’s Dam Park.  Even after the mill pond was no longer required the dam in this park used to have the boards inserted every summer to create a fishing and swimming hole.  This practice continued into the 1970’s.  From this park the trail extends in both directions however it has no discernable marking.  If there are coloured slashes I was unable to find them anywhere along the trail.

The trees in the park are full of empty Tent Caterpillar nests.  Placement in the tent is critical because the caterpillars emerge during the cool of spring.  They must elevate their body temperatures above 15 degrees Celsius in order for digestion to occur.  They move between layers of the tent to regulate themselves.  It is common for the temperature of the mass of caterpillars to be as much as 30 degrees Celsius higher than the surrounding air on a cool sunny morning.

The Humber River was a source of water power and when the counties were surveyed it was the responsibility of the survey team to record the locations of suitable mill seats.  The stretch of river around what would come to be known as Bolton had several suitable places as the river drops quickly in elevation between Glasgow and Bolton.  James Bolton arrived in Upper Canada in 1819 and spent two years building mills around Southern Ontario.  He decided to settle down and farm and bought a 100 acre lot just north of Bolton.  In 1821 George Bolton emigrated to Canada and bought a mill site on the Humber River near his relatives.  James helped George build a grist mill and soon the community of Bolton’s Mills was established.  Black Walnut trees are no longer used for food like they were in the early days of settlement.  Pioneers used to set aside as many sacks of these nutritious nuts as they could for the winter.  These days Persian Walnuts are much easier to remove from the shell and have taken over the market.  Black walnuts are growing in several places along the trail and the green fruit balls are dropping to the ground. 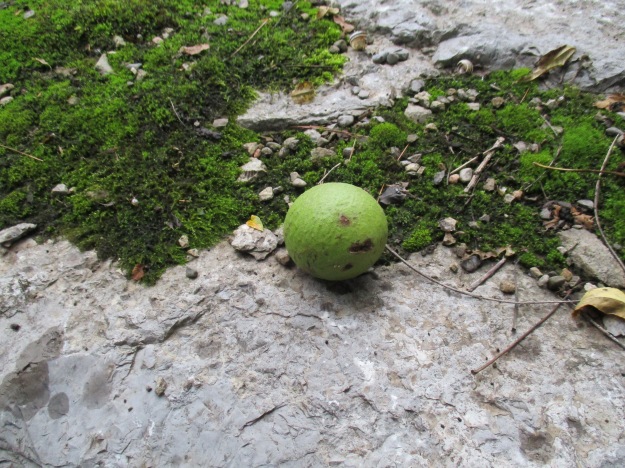 Although George started the mill he never married and it is James’ six sons who were prominent in village history. In 1842 one of them, also named James, bought the mill from George.  James moved the grist mill to the north side of the river and added a saw mill.  The first general store and post office was run by another of James Bolton’s sons, this one named George.  As can be seen in the picture below the clusters of wild grapes along the trail are ripe.. 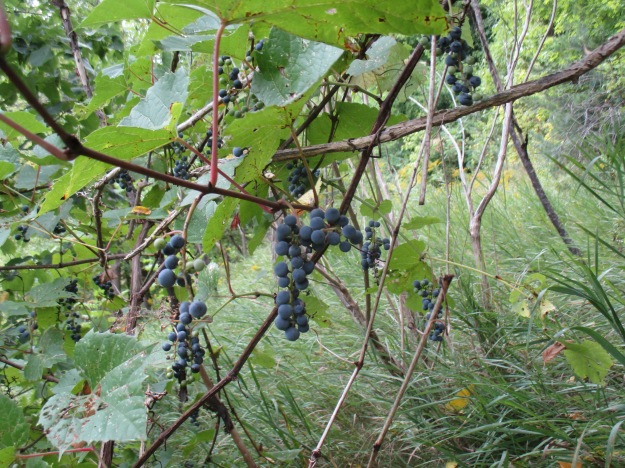 The Toronto, Grey and Bruce Railway arrived in town in 1870.  With access to other markets the town prospered and new industry was attracted to the area around the mills.  A cooperage for making barrels and a blacksmith shop were added and new homes sprang up to house the workers.  By 1872 the community had grown to the point where it was incorporated as a town.  Dick’s Agricultural Works opened in 1869 and quickly became a major producer of quality agricultural implements.  Dodd’s Carriage Works and Plumber’s Foundry added to the growth of the town and led to it becoming the largest community in Caledon township.  Bolton Mill Park sits on top of the filled in mill race from Bolton’s mills.

The mill passed out of the Bolton family’s control quite quickly as James sold it to Edward Lawson in 1855.  Lawson had it for 5 years before selling to John Gardhouse.  In 1881 he sold it to Andrew McFall who had to add steam power due to falling water levels in the Humber River.  The McFall family operated the mill for 46 years.  In 1899 Andrew added a rolling-chopping block so he could produce livestock feed.  The town of Bolton got it’s first electrical power from McFall’s generator in 1905.  McFall built a new dam just downstream from Bolton’s dam.  This 1912 concrete dam was built in response to another of the towns major floods, the second in two years.  Around 1984 the tiers were cut off of the dam reducing it to water lever to prevent the flooding that the dam was causing in the spring when ice got wedged behind the tiers.  Recently a channel was cut in the dam to allow fish to pass through.  The remains of McFall’s dam are featured below and in the cover photo.

The mill changed hands several more times and finally ended up in the hands of the Woodbridge Farmer’s Cooperative in 1952. It had stopped using water power the previous year. In 1968 the mill was closed and then demolished to make way for Humber Lea Road.  The remains were set on fire for the local fire department to practice on.  A diversion channel was created in 1983 to carry the river away from the town core to try to reduce the damage caused by ongoing floods.

In other places the river has been given a hard shoreline to reduce erosion. 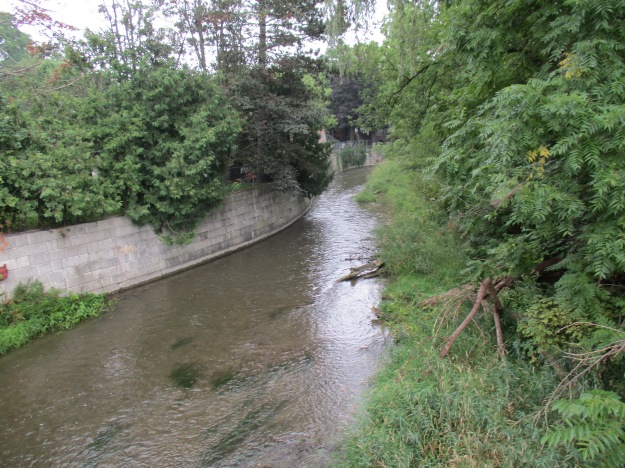 Black Eyed Susan flowers are out in full bloom.  These ones are sharing their space with this member of the sunflower family that is known as a White Swan or White Coneflower.

The Humber Heritage Trail is a nice place to explore and it would be a great idea of they would mark the trail so people could follow it more easily.