The Terra Cotta Conservation Area has gone through many transformations over the years and has now been converted from a campground and picnic area into a naturalized park full of hiking trails.  We parked on the 10th line where the Bruce Trail crosses and a side trail known as the Walking Fern Trail leads to a rare species of ferns.  The main trail follows the road for a short distance before passing along the edge of a series of fish ponds.  This property is legally known as lot 29 10th concession in Halton.  The home was built around 1910 and is known as Edwardian architecture because King Edward was on the throne (1901-1910).  This style of building is generally less ornate than the Victorian style that preceded it.  The home is made of field stone with cut stone quoins on the corners and around the windows.  An enclosed stone porch surrounds three sides of the building.  A small stone bridge leads to a circular island in the pond. 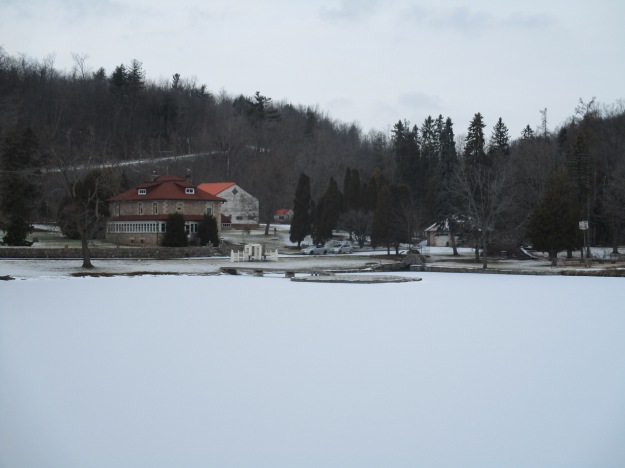 Queenston Shale can be seen along the sides of the trail.  The distinctive red and grey shale was formed in the Queenston Delta during the Silurian period when the sediments of the Niagara Escarpment were being laid down.  These shale formations have almost no fossils in them and are the lower layers of the escarpment.  They can be seen here as well as at the Devil’s Punchbowl and Cheltenham Badlands.

In the 1940’s Clancy’s Ranch opened and it soon turned into a popular swimming spot. Soon it would pass to Leo Wolf and Gord Ward who developed a weekend recreation park which they called Terra Cotta Playground.  It became a popular place for dances and picnics.  In 1958 the Credit Valley Conservation Area of Terra Cotta was opened.  In the 1980’s we used to camp here in one of the 137 campsites that the park featured.  These have since been replanted as have the 650 parking spaces that used to serve the 10 acre day use park.  Mini golf, a concession stand and a 1 acre swimming pool used to round out the facilities.  The pool had replaced the swimming hole on Clancy’s Ranch.  A more environmentally friendly approach has since been taken with the pool being torn out and replaced with naturalized wetlands.  These wetlands are now used as an educational tool. Wolf Lake is named after Leo Wolf and has a thin coating of ice on it at this time.

One of the side trail loops in the park is known as Maple Hills Loop.  Near where this trail joins  the Terra Cotta Lane trail there is a series of tubes fixed in the trees for the collection of maple sap.  This will then be boiled down to make maple syrup.

When we entered the woods we had heard the hard tapping of a large woodpecker as it searched for it’s food.  From the sound we guessed that it was a pileated woodpecker and we found plenty of evidence of their presence in the area.  The pine tree pictured below has a fresh pileated woodpecker hole dug in it.

Terra Cotta Conservation Area has a wide variety of hiking trails that are mapped out in eight colour coded trails.  The post below has an orange tag to mark the Vaughn Trail, a red tag for the Bruce Trail and a purple one for the Terra Cotta Lane trail.  After wandering around parts of each of these trails we took the Bruce Trail in search of the Terra Cotta Waterfalls.

We took the purple trail named Terra Cotta Lane.  This trail follows an old roadway along the western shoreline of Wolf Lake. 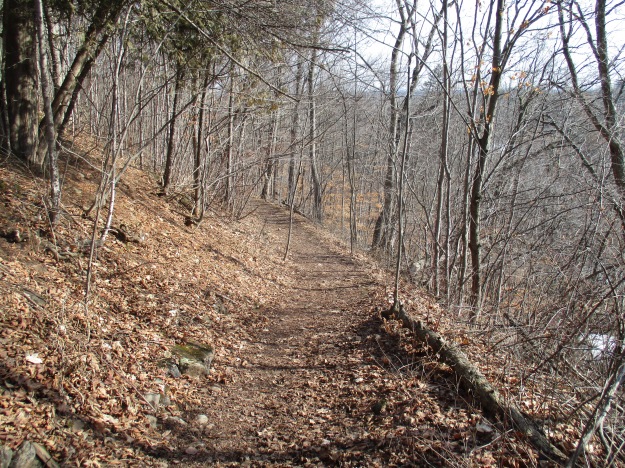 Terra Cotta waterfall is a 12 metre plunge waterfall on Roger’s Creek.  It is visible from the main Bruce Trail just north of the conservation area.  The waterfall has a deep plunge pool and the shale is deeply undercut below the harder dolomite that it flows over.  It is possible to reach the bottom of the waterfall in the summer but ice makes it impossible at this time of the year without proper gear and ropes.  This waterfall is also seen in our cover photo.

A coyote has passed along the side of Rogers Creek leaving a set of distinctive footprints. The front prints are larger than the rear with the average size being about 2.5 inches long by 2 inches wide.  They have an oval shape and are more oblong than a dog’s prints.  The claws are less prominent than a dogs and the two front claw marks will be close together.

The earliest versions of the horse drawn sickle mower began to appear around 1845 but they didn’t become popular until the 1860’s.  By the second world war there was a push from the government to replace work animals with tractors.  This example of a late 1800’s farm implement sits on display in the front lawn of the Terra Cotta Inn.

Across the street from The Forge Park stands this old building.  Typical of wagon maker shops this building has a doorway on the second floor where painted parts would be left to dry.  The date stone on the front of the building is badly worn but appears to say 1900.

On the edge of town stands this gorgeous five bay Georgian Revivalist home which is very similar to the Cawthra Estate house we visited last weekend.

There is plenty left to visit in Terra Cotta including the historic brickworks and kilns. These will have to wait for another time.