When Yonge Street was cut through the forest by The Queen’s Rangers in 1796 it opened up the area for settlement.  Small towns formed at almost every intersection.  An intersection such as Yonge Street and York Mills Road where a river passed through with good mill sites was assured of attracting industry.  This area is known as York Mills after it’s post office but is also well known as Hoggs Hollow.

I parked on Mill St. in the parking lot on the east side of the West Don River.   It was overcast and 7 degrees.  The first mill was opened as early as 1804 by Samuel Heron.  Millford Mills was opened in 1817 and supplied the first name to the town.  This mill was bought by James Hogg in 1824.  In 1856 a subdivision plan was developed for Hoggs property by his sons which was to be called Hoggs Hollow.  Only a few houses were built at this time and the lots were not all built upon for over 100 years.  James Hogg built the York Mills Hotel in 1857 and it is one of only half a dozen remaining original buildings in the community.  Having changed hands many times, today it serves as the Miller Tavern.  Hogg added a general store beside it on the south.  He also had a tannery and a distillery.  The general store served for awhile as a change room for skaters using the York Mills Skating Rink which was formed each winter on the site of today’s parking lot.  The cover photo shows the tavern and the general store, turned change room, as it appeared in the 1950’s.  Today the tavern has been restored to it’s original brickwork and the old store is gone, having been destroyed by fire.

The York Mills Presbyterian church was built on the east side of Yonge Street on land provided by James Hogg.  When the family developed the subdivision plan the church was moved across the street on the hill side, directly opposite of the tavern.   The church was closed and demolished in 1889 and the cemetery was eventually forgotten.  It was rediscovered in 1955 when the area was being developed for residential use.  Twenty five graves were uncovered with two of them belonging to members of the Hogg family.  A historical plaque marks the spot today.  In the 1877 Historical Atlas the church is marked by “Pres” right below the name York Mills.  Their cemetery is marked with an asterisk just above it.  Too bad no one checked the old map before they dug. 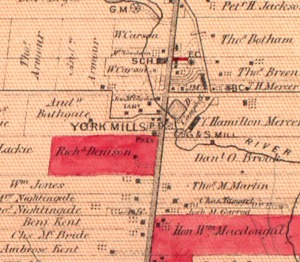 The Yonge Street bridge in Hoggs Hollow was destroyed in 1954 during Hurricane Hazel and was replaced with a wider one a year later.  The archive photo below shows the bridge following the hurricane.

North of York Mills Road are two of only three mill worker cabins that were built in the Hoggs Hollow subdivision.  They have been preserved and moved to their current location on Yonge Street where they guard the entrance to a fancy restaurant.  Ironically, it is a place the original inhabitants of these homes likely couldn’t have afforded to eat at. 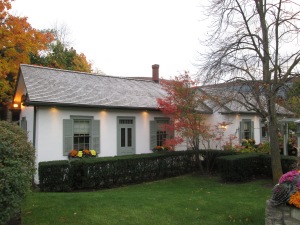 On the east side of Yonge just north of York Mills Road is the old walkway up the side of the hill to St. John’s Anglican Church.  The church was started in 1816 and the present building was erected in 1843.  The church has the only active cemetery in York Mills and there are many prominent early settlers buried there.  I saw one grave marker dated 1820.  This church is marked as EC in the historical atlas for England Church and an asterisk marks the grave yard.

Walking through the cemetery brings you to the Lychgate.  A lychgate is a roofed gate found on traditional English churchyards.  The word lych come from the Saxon word for corpse.  The corpse would rest under this roof while part of the service was read before advancing into the grave yard for burial.

When Yonge street was built in 1796 it was thought that the valley was too steep and so the old road runs across the eastern rim of the valley.  When Yonge Street was straightened a few years later this became known as Old Yonge Street.  Turning to the right will bring you back to York Mills road.  Just to the east is the former site of the York Mills Baptist Church erected in 1833. The church was closed in 1945 and demolished in 1948.  The cemetery was just to the east of the church and it remains today, tucked in a small lot behind a hedge.  The church is marked as BC in the atlas and has the usual asterisk to mark the graveyard.  The gate has a unique old latch that drops over the gate post. 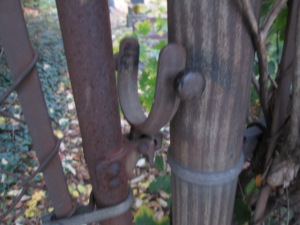 The church built a manse for their pastor’s family in 1840 on the lot to the east of the cemetery.

Returning to Old Yonge Street you can follow it back to Mill Street where the name changes to Donino street.  A couple of short blocks later is a memorial to the towns milling past.  The grinding wheel from the last mill to close in the valley (1926) is preserved here.

A time capsule has also been buried in the parkette.  It is set to be opened in 2040.

As you return to the car you reach the house of George Pratt.  George ran a mill in the area of York Mills park.  He built this house in 1886.

The old mill dam is almost under the Mill Street bridge. 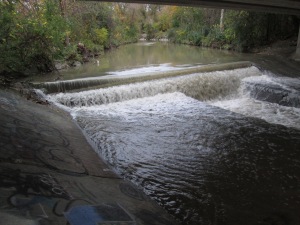 10 thoughts on “York Mills – Ghost Towns of the GTA”