It was zero degrees and quite nice when the sun was out.  We parked in the parking lot near the Grenadier restaurant where there is plenty of free parking.   High Park is too big to be explored in a single session so we returned to pick up from where we left off at Colborne Lodge last week.  John George Howard had donated 120 acres of his land to the city for High Park in 1873. His remaining 45 acre estate, including Colborne Lodge, had been added to the park in 1890 when he died.  The city has acquired two other parcels of land to bring the park up to almost 400 acres.  We went down the hill past the area known as the dream site.  Here there is an outdoor theatre.

Along the way we found a place where a group of cardinals were feeding.  In most bird species the males are brightly coloured while the females have more earth colours. This helps the female hide in the nest to protect the eggs.  This was a rare group of cardinals that actually sat still long enough to get their picture taken.  The female has a little red on her wings and tail feathers as well as a red beak and crest. 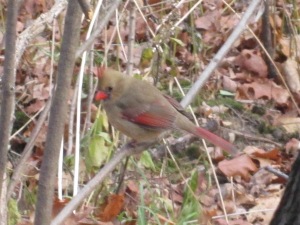 The male cardinal is bright red all over except a little black around his beak.  Male cardinals will use themselves as a distraction to keep you from finding the female during nesting season.  The male will attract your attention and then deliberately lead you away from the nest. 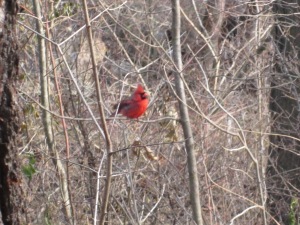 We found a random tree in the park that has been sparsely decorated for Christmas. 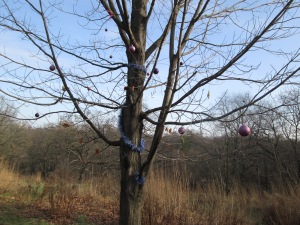 In 1967 the Toronto International Sculpture Symposium was held in the park.  It was located not far from the swimming pool and ice rink.  Of the 10 permanent sculptures there are still 5 remaining.  One of these is known as Three Discs and was created by Menashe Kadishman who is a world famous Israeli artist.  This is the only one of his sculptures in Canada.  Standing beside it the height appears to be between 25 and 30 feet.

In 1893 a zoo was added to the public attractions at High Park making it one of the oldest continually running public zoo’s in North America.  Originally the zoo area contained pens for deer.  Over the years the zoo has contained specimens of animals from all over the world. Today it is home to emu, highland cattle, sheep and peacocks as well as the animals pictured below.  Admission is free making it a great place to visit often.

The zoo still houses a form of deer, this northern species is commonly called reindeer. Reindeer are also known as caribou and are featured on the back of the Canadian 25 cent coin. They are unique among the deer family in that they are the only ones where both the male and female grow antlers.  The male antlers, like the ones below, tend to be grander and more complex.  The female antlers are thinner and simpler.  The male in the picture below had an injury on his forehead that is currently healing.  The medication has caused his fur and parts of his antlers to turn purple. 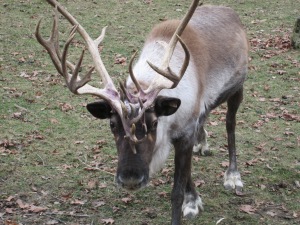 In the early 1800’s it was estimated that there were 60 million bison in North America.  By 1900 that number had dropped to as low as 1,000 animals.  Preservation efforts have restored their numbers to about 350,000.  American Bison are often called Buffalo but are in fact only distantly related to the buffalo. High Park has had bison for over 100 years, meaning that they have been part of the conservation effort from the earliest days.  The cover picture shows the bison as they appeared in 1926.  This little female bison was born this spring and can live for 25-30 years.  It’s possible that she is one of a long line of bison born in High Park and descended from the bison in the cover photo.

The archive photo below shows a buffalo pen at the zoo in 1908. 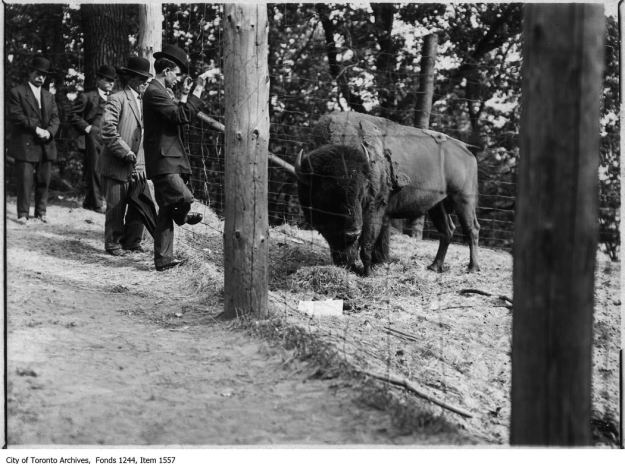 When we got back to the car we found a 1974 Monte Carlo in the parking lot.  These cars were one of my favorites back when they were new because I always like the exaggerated folds on the side panels.  In 1973 the US federal government had mandated a 5 mph front bumper and extended it to include the rear bumper for 1974. This car features both and the tail lights are date coded 74.  The idea was that a car should be able to withstand a 5 mph impact without damage to the lights, engine or safety equipment.

Like us at www.facebook.com/hikingthegta for a gallery of unpublished photos.