Sunnyside Beach originally was part of High Park when the entire land grant belonged to John George Howard.  The name Sunnyside first referred to a summer villa that John had built on the sunny side of a hill overlooking Lake Ontario.  The 1877 County Atlas pictured below was drawn just 4 years after Howard gave High Park to the city and just a year after it opened to the public.  Previous posts on High Park are linked at the end but today the goal was to explore the area along the lakefront.  In 1854 John sold a strip along the lakefront for the construction of a railway.  It is marked with a white and black dashed line and labelled as Great Western Railway on the map.  In 1891 a second line was added when the Grand Trunk Railway came through. 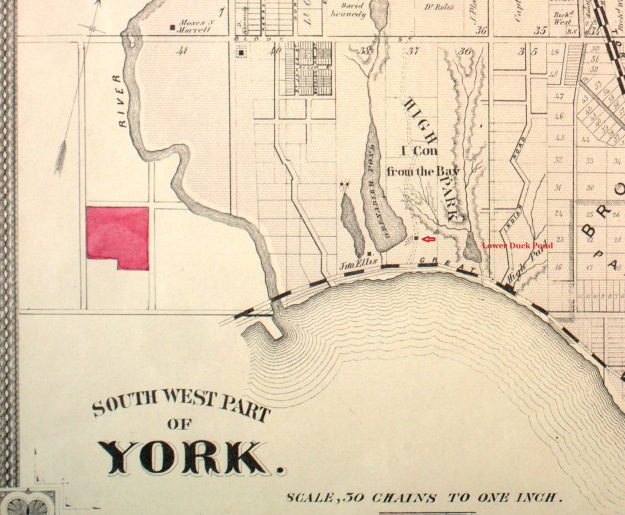 There is a small parking lot beside Colborne Lodge (red arrow).  A trail leads from here to the Lower Duck Pond on the eastern edge of the park.  The outflow from the pond no longer goes directly into the lake  as it was diverted into Grenadier Pond during the waterfront redevelopment.  A trail runs between the two ponds and passes through the corner of the orchard which is marked on the map between the house and Grenadier Pond.

On May 19, 1911, the Toronto Harbour Commission was established and given the mandate to create a plan for the redevelopment of the entire waterfront.  This included the filling in of Ashbridges Bay to create the Port Lands, deepening the harbour to twenty feet and creating over 1400 acres of land through lake fill.  The plan called for a strip of parkland with recreational uses that would stretch from the Humber River almost all the way to Bathurst Street.  The picture below shows the outflow from Grenadier Pond.  A sandbar that separated Grenadier Pond from the lake was shored up to support the trains when the railways were constructed.  The outflow from the pond was also altered at that time and a weir was constructed to help control water levels.  The weir, at the corner of today’s Ellis Avenue, was replaced with a concrete one in 1936.

Colborne Drive follows the old driveway to the house that is marked on the atlas above. Following it south you will pass under the old railway line and the more recent concrete Gardiner Expressway bridge.

Looking from the east when you reach the beach, the pedestrian arch bridge can be seen over the mouth of the Humber River. Some of the breakwall can be seen in the lake.

The Sunnyside Bathing Pavilion was built in 1921 on land that was created by pumping muck from the bottom of the lake on the inside of the 17,985 lineal feet of breakwall.  To cover this with soil The Harbour Commission bought a farm in Pickering and moved 40,000 cubic yards of soil to the site.  The picture below shows the bathing pavilion facing the lake, with some of the original, now mature, trees growing beside it.

The main entrance to the Sunnyside Bathing Pavilion has this decorative archway.  The date 1922 can be seen at the top and this reflects the June 28, 1922 opening of the pavilion.

The picture below shows the interior courtyard of the pavilion.  When it was constructed it cost $300,000 which would be $4.1 million dollars today.  At 400 feet long, and with separate sections for men and women, it could accommodate 7,700 bathers.  It also had lockers for each bather.  Surprising by today’s standards was the ability to rent a bathing suit for 15 cents. 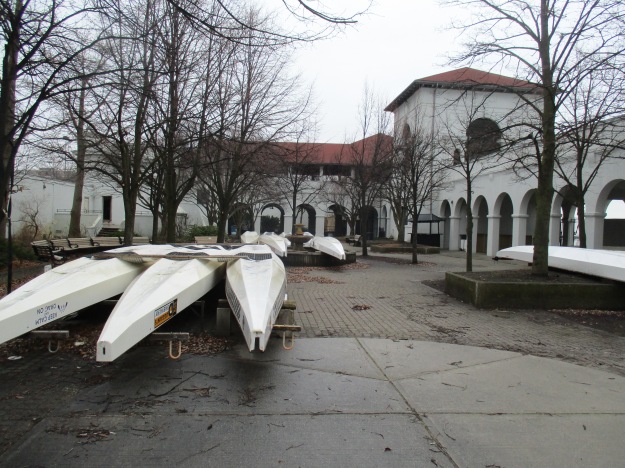 After two very cool summers in which there were few people who braved the cold waters of the lake it was decided to build a swimming tank (not called a pool by the local residents). It cost $75,000 in 1925 but at 300 feet by 75 feet it was once considered the largest outdoor pool in the world.  It was built to accommodate 2,000 swimmers at a time.   Originally the tank cost 35 cents for adults and 10 cents for chidren but today there are no fees (and no water).

Starting in 1922 Sunnyside Amusement Park became the best-known park of its kind in Canada.  A roller coaster, Ferris wheel and merry-go-round provided exciting rides while the midway offered food, games and entertainment including watching horses jump off high platforms into the lake.  The archive photo below shows a crowd at the park on Canada Day 1924.

In November 1955 a small fire destroyed one of the concession stands near the roller coaster.  A second fire just a few days later made the city suspicious of arson.  Then on the 24th a major fire destroyed several buildings and nearly took the lives of some youth that were trapped in one of them.  City council passed a motion on November 26th calling for the removal of the park in preparation for the construction of an expressway.  A contract was awarded on December 5th and within a couple of months, the park was gone.  One of the rides continues to operate because the old carousel was moved to Disneyland in Florida.  Only the bathing pavilion and swimming tank still remain to mark the site of the amusement park.  Memories of the docks and wharves at the beach can be seen in the water off shore.

The city built the Gardiner Expressway on the site of the former amusement park but retained a strip of parkland between the road and the lake.  In Budapest Park just east of the pavilion a stegasaurus appears to be wandering along near the boardwalk. 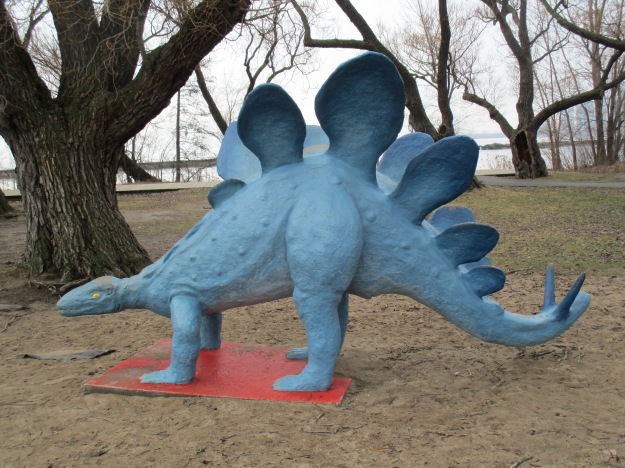 The Sunnyside Boardwalk and The Martin Goodman Trail provide a link to The Waterfront Trail and join a hiking system along the Canadian shore of Lake Ontario.

Our other High Park blogs:  Colborne Lodge looks at the origin of the park and the historic home it still contains.  High Park Zoo examines the history of the zoo and features many of the animals it houses today.  The Eastern Ravine reveals a unique geological feature in the park.