Just two degrees with a biting wind.  Not a great day for moving but my brother didn’t get to pick the weather.  He had been living in the former town of Dixie on property that once belonged to Joseph Silverthorne who was the founder of the town.  Joseph’s house, known as Cherry Hill house, was featured during the exploration of Summerville.  A break from moving is a great opportunity to explore and so we set out for the Dixie Union Chapel.  Dixie Union is the oldest surviving union chapel in Canada.

Early settlers in the Dixie area were too few in numbers to be able to afford to build their own churches.  The solution was for several denominations to go together and build a union chapel that they all could use.  Eventually congregations would grow and get their own churches, as happened here.  In Dixie the Anglicans, Methodists and Presbyterians got together and built Dixie Union Chapel. The first chapel was a log one which was started in 1811.  The war of 1812 interrupted construction and it was not finished until 1816.  In 1837 the project of hauling stone from the Etobicoke creek was begun in preparation for construction of a new building.  There is some suggestion that Silverthorne’s mill was taken down around this time and the stone may have been recycled in the present chapel.  Like the earlier log building the Stone Chapel, (as it was also known) suffered a delay in construction.  This time due to the Rebellion of 1837.  There is a wooden clock in the front of the church just below the roofline.  The cover picture shows the time as 11:02 and it is dated at the bottom with 1837. 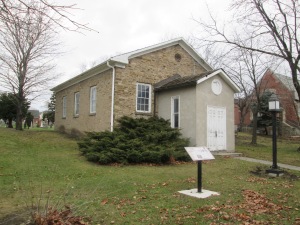 Buffalo Bill Cody was famous for his travelling show which presented the old west.  He got his nick name “Buffalo” because of a contract he had in which he sold buffalo meat to the Kansas City Railroad workers.  American Bison is the correct name for what is often called buffalo. Cody is reported to have killed 4,282 bison in an 18 month period.  A brief write up about bison is included in the previous post High Park – Zoo.  The Cody family were the first settlers in what became Dixie and donated the land for the church.  Buffalo Bill Cody was baptized there in 1847. 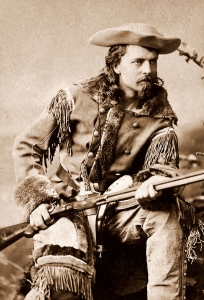 This is the only graveyard in Mississauga that existed prior to the war of 1812.  There are six known burials of militiamen who served in that conflict.  Some older tombstones here run at a 45 degree angle to the general grid pattern of the grave markers.  These “angled” ones run with their feet facing the east to allow the dead to rise facing the dawn on judgement day.  Other denominations tend to have their tombstones run parallel to the property lines.   As this is a union cemetery there is a mix of these two traditions making this rather unique.  In the picture below the tall marker on the left is for the Silverthorne family, including Joseph.  The two white stones on the right, along with the four shorter ones to their left, are angled facing east. 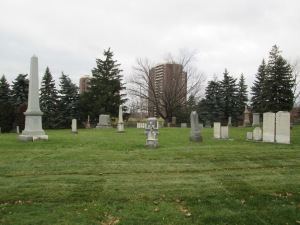 Unfortunately the weather and possibly vandals have taken their toll on the older stones in this cemetery.  Many of them are broken off and are leaning against trees, fences and the chapel itself. 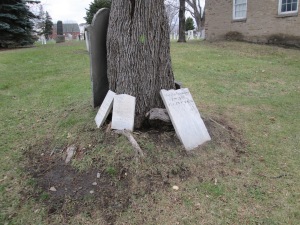 This tree looks like it tried to escape by bending the bars on the fence.  Some day the trunks will rot and drop out of the fence leaving people to wonder how the wrought iron got bent like that. 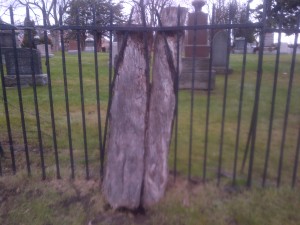 The old steel lamp posts at the front of the building would have been forged by the local blacksmith.  Having three congregations in the building pretty much guaranteed the services, usually volunteered, of most tradesmen.  This kept the cost of building and repairs to a minimum.  Today lamps like this are back in style and can be bought by the container load from China. 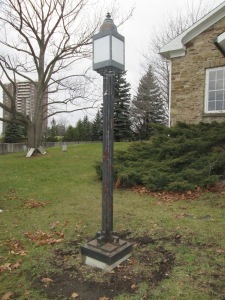 In 1870 the Anglicans built a brick church just to the east of the  Dixie Union Chapel which they called St. John The Baptist.  It was remodeled in 1922 but was destroyed by fire after a lightning strike in 1925.  The church was reconstructed in a similar style as the 1870 building. 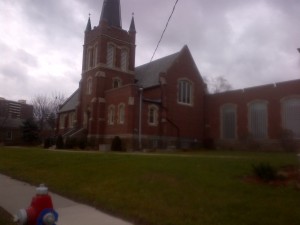 The Presbyterian congregation erected their own building at the north end of the cemetery in 1910.  This building now serves a similar function to the old Dixie Union Chapel.  According to the sign out front it also hosts a Korean Methodist and an Eastern Orthodox Congregation. 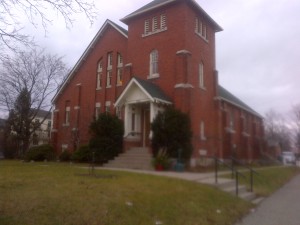 While helping my brother move I was admiring the detailed inlay of the wood around the edge of an antique dresser.  It was manufactured by North American Furniture Company in Owen Sound and sold at Simpsons.  At one time Owen Sound was a hub of furniture manufacturers with over 25 in the early 1900’s.  The North American Furniture Company operated from 1910 to 1939.  It was nice of my brother to furnish this item for this post. LOL 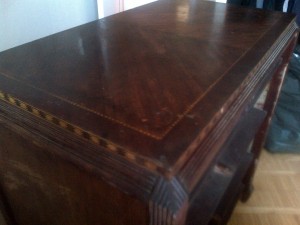 That’s all for 2014.  It was a year full of adventure, exercise and investigation.  I loved it all. Happy New Year everyone and here’s to some great hiking in 2015!

8 thoughts on “Dixie – Ghost Towns of the GTA”