The weatherman has been calling for a very cold weekend with wind chills in the range of -40, but this morning it was only -7 feeling like -18.  We parked in West Deane Park and headed south along the east side of Mimico Creek.  After the trail passes under Martin Grove Road the park changes names to become Ravenscrest Park.

Sumacs are one of the first plants to take hold on previously cleared land.  They can reach heights of over thirty feet and produce a type of fruit known as a drupe.  These clusters of reddish fruit are known as sumac bobs and form the tips of each branch.  Sumac is used as a spice in some middle eastern foods and also as a dye.  The drupes are used as a winter source of food for birds who spread the seeds through their droppings.  In the picture below sumac bobs frame the sun as it was peeking out from behind the clouds. 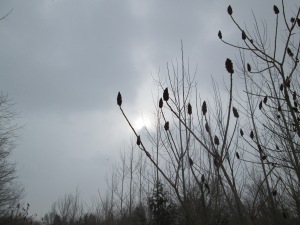 On July 21, 1793 the Queen’s Rangers under the direction of Lieutenant-Governor General Simcoe landed on the north shore of Lake Ontario and stuck a British flag in the soil where they would build Fort York.  This was the founding of the town of York (Toronto) and the beginning of Simcoe’s plans for the defense of Upper Canada.  Simcoe moved the capital of the colony from Newark (Niagara) to York in 1797.  In 1801 the British flag was modified to include a red saltire inside of the existing white one to represent the Irish who were united with England that year.  The British flag is known as the union flag.  It is only correctly called a union jack if it is flying on a naval vessel.

During the war of 1812 the Americans attacked Fort York on April 27, 1813.  The British, sensing defeat, decided to retreat to Kingston to prevent the army from being captured.  They left their flag flying at Fort York to fool the attackers into thinking they remained inside.  On the way out they detonated their munitions store to prevent it from falling into enemy hands.  When the dust settled the Americans replaced the British flag with their own and used the British one for a pillow for General Pike who was mortally wounded in the explosion.  This is the only British flag ever captured in battle that was never recovered.

The Union Flag was used in Canada until after confederation.  In 1868 Canada adopted a Red Ensign with the union flag in the upper corner, and featuring the arms of each of the four original provinces.  In 1922 the Royal Arms of Canada replaced the provincial arms and 3 green maple leaves adorned the bottom of the crest.  In 1957 the maple leaves were changed to red.

Having the union flag as part of the Canadian flag became an issue during the Suez Crisis in 1956 as the Egyptian government objected to Canadian Peacekeepers because of it.  The flag was never popular in french Canada, also because of the union flag it contained.  In the early 1960’s a proposal came to create a uniquely Canadian Flag.  The new flag was to feature nothing distinctive to any group of people which meant it could not contain the union flag or the french fleur-de-lis.  A symmetrical design was chosen so the the front and back would look the same in the wind.  An 11 point maple leaf was selected because wind tunnel experiments showed there was the least distortion of the leaf in high winds.  The flag was officially flown for the first time in a ceremony on Parliament Hill on Feb. 15, 1965.  As I write this on Sunday afternoon of Feb. 15, 2015 the flag is celebrating it’s 50th birthday.  Happy Birthday to our flag!

As we walked through Ravenscrest Park we saw that one of the homes on the top of the ravine was flying our flag.  The picture below and the cover photo illustrate the majesty of the Canadian Flag. 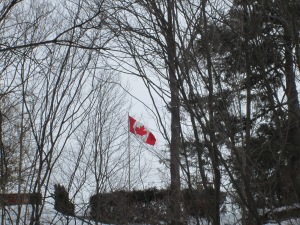 We followed the trail under Rathburn road into Echo Valley Park.  There is section of trail here that passes through a wooded area.  If you stand on the side of the trail for a few minutes all the birds that have been scattering in front of you will return.  We saw a selection of Blue Jays, Cardinals, Doves, Downey and Hairy Woodpeckers and Chickadees.  A Kestrel appears to have seen them as well.

Along here we saw an old utility pole on which someone has spray painted a heart with an arrow through it.  Since it was Valentine’s Day when we noticed the pole it seemed to be appropriate.  There are several traditions surrounding the origins of Valentine’s Day, some suggesting Christian roots and others Roman.  Either way, greeting card companies manage to sell 150 million cards each each year.  Valentine’s Day is special to me and my wife as well because eight years ago we got engaged on this day. 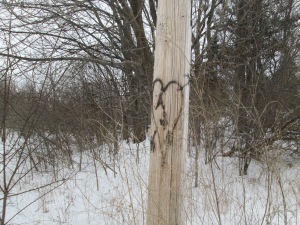 A common tool used for inventory control in manufacturing is known as the Kanban System.  A tag is used to identify a quantity of an item.  When that quantity is consumed the tag becomes the ticket to order replacement stock.  Toyota has been credited with developing the system in 1953 but in reality it has been in use far longer than that.  In Toronto there were community dairies in various parts of the city.  Due to poor refrigeration, milk had to be delivered almost daily.  Houses had a milk chute (delivery door) like the one featured in the picture below.  If you needed milk you just left your empties and the money in the chute and when you came home there were fresh bottles of milk there instead.

As we continued down stream we saw that someone’s playground toys have ended up frozen in the middle of Mimico Creek. 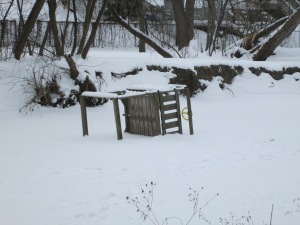 The ice on Mimico Creek is several inches thick in most places and people have been going back and forth.  On the opposite side of the creek is an ornate bench that someone has crossed over to examine.  Perhaps it was just a two minute bench minor.

There is a foot of snow on the ground but there appear to be some interesting areas here for exploring later in the year.