Along the Lakeshore stands an abandoned water tower, part of a WW2 small arms factory and rifle testing range.  Today we are 49 days into winter with only 42 remaining which to me means its almost over. The forecasters are calling for up to 30 cm of snow over the next couple of days.  Even so, this is the first hike of the winter where I’ve switched from hiking to winter boots.  It was minus 4 with almost no wind chill and a steady light snow. I parked in the parking lot for Marie Curtis Park on the west side of the Etobicoke Creek.

Col. Samuel Smith was granted lots 4-7 in 1806 and they remained in his family until they were sold to the Halliday’s in 1877.  They were used for mixed farming for the next few years. Following confederation in 1867 the British Government wanted the new country of Canada to assume greater responsibility for its own defense.  In 1868 the Ontario Rifle Association was formed for the training of militia.  They used the garrison common at Fort York until 1891 but the increase in the use of the CNE grounds and the addition of a passenger wharf at the foot of Dufferin Street made firing rifles at the fort increasingly unsafe.  The property on the west side of Etobicoke Creek was purchased as the Long Branch Rifle Ranges.  A militia and cadet training camp was maintained on the site until WWI when the Royal  Air Force administration offices were located here.  Canada’s first aerodrome was at Long Branch and over 130 students had graduated, at a cost of $400 each, by the time it closed in December 1916.  William Faulkner, the famous author, was stationed here while training for the Royal Canadian Air Force.

The most prominent structure remaining on the site today is the old water tower.  It was built in 1941 to serve the needs of the industry on the site. 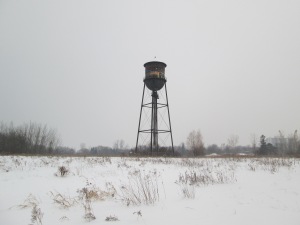 In 1935 the Department of National Defense purchased the property with the idea of creating an arms manufacturing site.  Small Arms Limited was founded as a crown corporation on August 7, 1940 to supply the Canadian Military with rifles for use in WWII.  The 1957 picture below shows the factory and several out buildings.  The large building with the lines on the top is shaped like an “L” with the black circle in the inner corner of the “L” being the water tower. The rifle range building is in the lower left and the first several baffles can be seen below it. 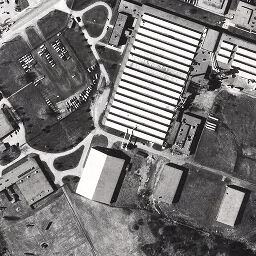 Women played a major role in the workforce at Small Arms Limited as can be seen in the cover photo making up most of the staff by 1943.  The factory produced its first weapons in June 1941 and by the end of the year had made 7,589.  By 1943 the plant was working three shifts, using 5,500 employees to produce over 30,000 units per month.  World War Two ended in 1945 and war-time production was completed in December with over 900,000 rifles and 126,00 machine guns having been produced.  Various military parts were produced in the facility from then until it closed in 1974. At the foot of the water tower stand two yellow gas regulators that were installed at the time the Small Arms company was founded.  They are dated 1940. 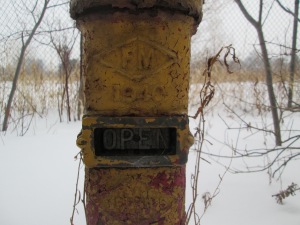 In 1910 Canada’s Department of Militia and Defense (renamed the Department of National Defense in 1922) acquired the property and built the wooden baffles that remain in place today. The DND built firing booths in 1940 to assist with the training of militiamen for service in WWII. The rows of baffles and concrete backstop can be seen in the centre of the 1957 aerial picture below. 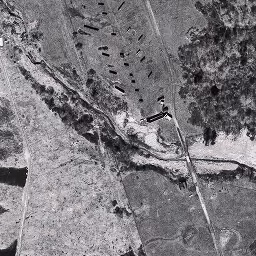 On the short rifle range there are 16 remaining baffles after 105 years exposed to the elements. Originally there were 30 of these which were hollow and filled with sand and soil.  They were intended to stop any stray bullets from leaving the range but also served to provide sound barriers for the adjacent small arms factory.  The picture below shows one of the few that is intact and not over grown with brush.  These wooden baffles are the last of their kind from this era in Ontario and are considered a militarily significant heritage site. 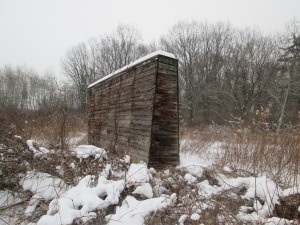 At the back end of the rifle range is a fifteen foot high and thirty-five foot wide concrete backstop which was constructed around 1925.  It’s surface is dotted with the impacts of hundreds of bullets from over the years. 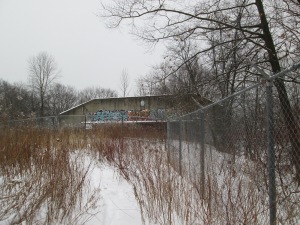 The only manufacturing building remaining on site is building number 12.  Dating to 1939, it was used as the rifle inspection facility.  It has a double fence, each with three strands of barbed wire surrounding it.  I guess they don’t want you to go in there. 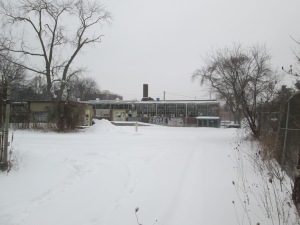 The various uses of the site over the years has taken the farm land and left it with a mix of PBC’s, VOC’s, metals and radioactive waste.  Over 72,000 tonnes of contaminated soil was removed from the site between 1998 and 2002.  The consolidation mound pictured here contains low level radioactive soil that has been buried in a containment facility since 2005.  It sits inside a third barbed wire fence behind the inspection building.  I guess they really don’t want you to go in there.

Circling back through the Small Arms Ltd property I noticed that someone left the door open at the top of the water tower.  Anyone want to climb up that ladder on the roof and close it?

Making my way across the Lakeshore Road edge of the arsenal lands I came to Etobicoke Creek. The trail along the creek’s edge brings you to a bridge that crosses the creek to the east side. Following the disaster of Hurricane Hazel in 1954 when the creek flooded destroying the homes along 43rd street (see Middle Road Bridge) this area was taken under authority of the conservation authority and Marie Curtis Park was created.  I walked that side of the creek to where it spills into the lake.  The ice on the railing at the edge of the lake is several inches thick and, to me, resembles baleen plates like those in the mouth of a baleen whale.

Bufflehead ducks suddenly disappear when they are feeding and can pop back up several metres from where they dove.  They are distinct with their white and black markings and spend the winter in sheltered bays and inlets.  I watched a few of them right in the mouth of the creek.

There are likely artifacts located here that will only be visible when the snow is melted.  I guess we’ll have to see sometime.

9 thoughts on “The Arsenal Lands”