The Etobicoke Creek runs through Marie Curtis Park which means that half of the park is in Toronto and half in Mississauga.  The park has had many uses over the years including being the site of two streets of homes, 42nd and 43rd streets.  These were some of the homes that were destroyed during Hurricane Hazel.

In 1787 the British Crown purchased the area along the north shore of Lake Ontario from The Mississaugas of the Credit.  The natives had been using the creek as a transportation route for centuries and there is some speculation that there may be artifacts 10 to 20 meters out in the lake.  Lake Ontario has been slowly increasing in size for the past 12,000 years.  At that time it was known as Laurentian Lake and was responsible for carving the Scarborough Bluffs out of it’s shoreline.  When the lake suddenly drained through the Hudson River it shank back to a much smaller size that we named Lake Admiralty.  Earlier native settlements would have been located at the mouth of the creek as it existed at the time on the shore of the smaller lake.  The mouth of the creek has been modified over the years and today it is protected from erosion by a concrete channel.  The picture below is taken from the pedestrian bridge looking out to where the mouth of the creek meets the lake. 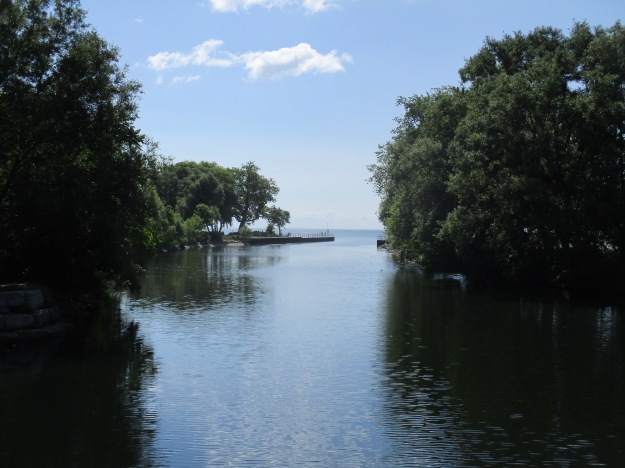 The British set about surveying the lands for settlement and counties were established.  Etobicoke Creek was used as a boundary between York and Peel.  Today the city of Toronto is on the east side of the creek while Mississauga is on the west.  Colonel Samuel Smith fought for the British during the American Revolution but was part of 7,000 soldiers captured following the Battle of Yorktown in 1881. After the war Smith moved to New Brunswick but eventually took a land grant at the mouth of the Etobicoke Creek.  He purchased other lands and put together a 1,000 acre estate.  Smith would later serve as the Administrator of Upper Canada.  I parked on the little stub of 43rd street beside Maurice J. Breen Park.  The trail heads north under the train tracks and into Enfield Park where the remains of the Long Branch Dam are on the Etobicoke Creek.  The concrete structure can be seen with a small waterfall in the cover picture.  Prior to Hurricane Hazel there was a road that crossed the creek on top of this waterfall.  The wall of the dam extends to the edge of the ravine and has, unfortunately, collected a lot of garbage as can be seen in the picture below. 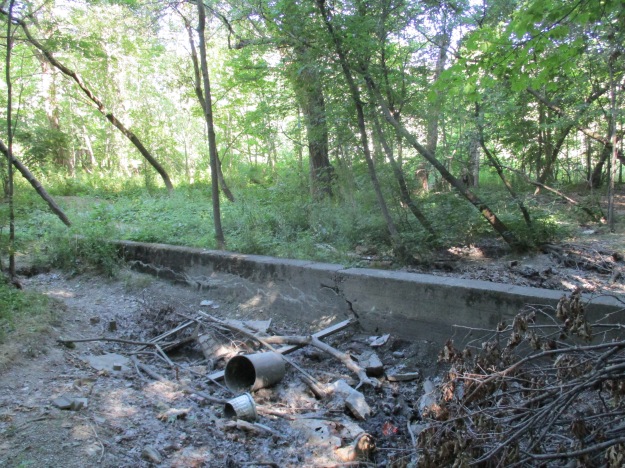 Colonel Smith’s son sold the property in 1871 to James Eastwood who sold a portion of it in 1883 to be developed as an amusement park.  Over the next few years lots were subdivided for cottages and the Long Branch Hotel was built.  In the 1920’s the Etobicoke Flats, the area at the mouth of the creek, was developed for homes and cottages.  The trail extends south of Lakeshore Road to Marie Curtis Park where a foot bridge allows the Waterfront Trail to pass over the Etobicoke Creek.  The Waterfront Trail extends for over 1600 kilometers along the Canadian shores of Lakes Ontario, Erie and St. Clair using the Niagara, Detroit and St. Lawrence Rivers to connect and extend everything.

The western portion of the property was sold in 1891 and became the Long Branch Rifle Ranges.  In 1910 a series of wooden baffles was installed on the rifle range, many of which remain on the site today.

The military built Small Arms Limited in the 1940’s and manufactured rifles and machine guns here.  The water tower and one building is all that remains of this industry.  The Arsenal Lands was explored in a previous post as well as a separate pictorial.

The property of the former Small Arms facility is now over grown but has a lot of old roadways running through it.

On October 16, 1954 Hurricane Hazel hit Toronto flooding every waterway and killing 81 people.  Long Branch was especially hard hit as the Etobicoke Creek flooded three streets around it’s mouth.  Houses were swept away by the rushing waters, several of them into the lake and seven people were killed here.  Many other houses were carried off their foundations and crashed into trees.  One such house was held back by two trees and 35 people survived by climbing onto the roof.  Marie Curtis was the Reeve for Long Branch (1953-1962) at the time and she is recorded as saying the trees were responsible for saving many lives.  The sanitary sewer which had been buried three feet under the creek now stood a foot above it and it was broken.  Homes in the area were condemned to prevent an epidemic.  The government expropriated 192 properties and cleared 300 buildings at a cost of $1.6 million dollars.  Marie Curtis campaigned to have the lands converted into a 35 acre park which was eventually named after her.  Just south of the bridge this black swallowtail butterfly was darting from flower to flower on a patch of Canada thistles.

Prior to Hurricane Hazel there was a sandbar in the lake at Long Branch and the houses extended to the shoreline of the lake.  At that time the Etobicoke Creek took a sharp 90 degree turn before entering the lake.  The beach that exists on the east side of Marie Curtis Park today was created from the sandbar by back filling.

Dog Strangling Vine is a relative to milkweed and has a similar pod of seeds.  The plant is an invasive species that chokes out native vegetation.  The seed pods can produce up to 28,000 seeds per square meter.  The seeds are easily spread by wind and animals.  They also cling to clothing and hikers should be careful to remove any from their clothes and the treads of their boots if they pass through a patch of the plant when it is in seed.  The picture below shows seed pods that have broken open.  The plant is hard to eradicate because aside from the seeds it also grows from broken pieces of the roots.

Marie Curtis Park has a lot of history and some interesting places for a small parcel of land and was well worth the exploration.