In 1947, following the end of the Second World War, the Canadian Government purchased 270 properties near the De Havilland Aircraft manufacturing facility in Downsview.  That year, RCAF Station Downsview was opened north of the city.  For the next 50 years the role of the base rose and declined with the cold war as the city grew all around the base.  In 1996 it was decided to close the base and developers started thinking about all the prime land Downsview was occupying.  It amounted to one of the largest undeveloped spaces in the city.  We set out to explore the small area of former military housing at the north end of the base and perhaps Downsview Park as well.  The capture below is from Google Earth on December 31, 2004 and shows the double row of houses set around the curve of Robert Woodhead Crecent at the bottom and John Drury Drive at the top of the picture.

When the housing was built Sheppard Avenue was on the original alignment.  When it was realigned and widened a new bridge was built to allow easy access for personnel to get to work at the base.  At the foot of the bridge stand two larger parking lots that still retain one flag pole.  A mounting plate for a second one can be seen on the right of the sidewalk.  Perhaps the park could one day fly the Canadian and Provincial flags at the corner of Keele and Sheppard.  This little piece of grass with the flag poles was on the south side of the original alignment of Sheppard Avenue which can be seen in the background of the picture below. 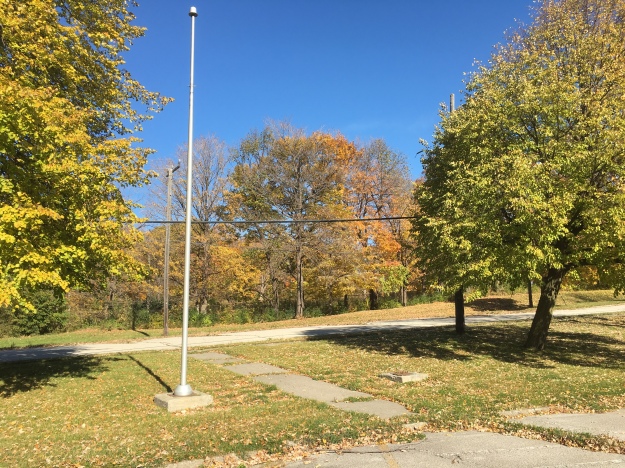 Robert Woodhead Crescent and John Drury Drive are named after Canadian soldiers from World War 1.  Between them they contained 81 houses, mostly built in 1953. Eight more were added in 1971 and the last six were built in 1980-1981.  Today, the curving roads have been given benches for pedestrians to stop and relax while cyclists, joggers and feral cats pass by.

Generations of families lived in these homes, raising their children and celebrating birthdays and anniversaries.  There are still a few clues to the daily lives of the former inhabitants.  When the base closed in 1996 ownership of the three housing lots in the Downsview area was passed to the Canadian Forces Housing Authority.  In 2009 they sold the property to Canada Lands Company who are responsible for the redevelopment of the Downsview lands.  They began that year by demolishing the military housing known as Stanley Green at the south end of the base.  Some of these homes had been damaged by the Sunrise Propane explosion of August 10, 2008.  The William Baker houses fared a little better but the last of the families moved out of there in October 2012.  A clothes line that may have held a line of drying clothes on a beautiful day in October still remains nailed to a tree in the picture below.

When the government expropriated the farm lands for the base they got some prime farm land.  Farmers often left the ravines as woodlots because they were difficult to farm and provided wood for heating and fence posts.  The woodlot at William Baker was already an established climax forest and the military left it intact.  Today there are trees that are over 100 years old in the forest and it is a great place for a walk in the fall.  The 30 acre woodlot has been protected from development in the Downsview Secondary Plan of 2015.

This private little community was featured in the 2010 Bruce Willis movie Red.  After the closure of the base, military families continued to live in the housing.  Many of them attended the military college on Wilson Road.  Today driveways are already becoming indistinct as nature takes over and grasses begin to invade the pavement. 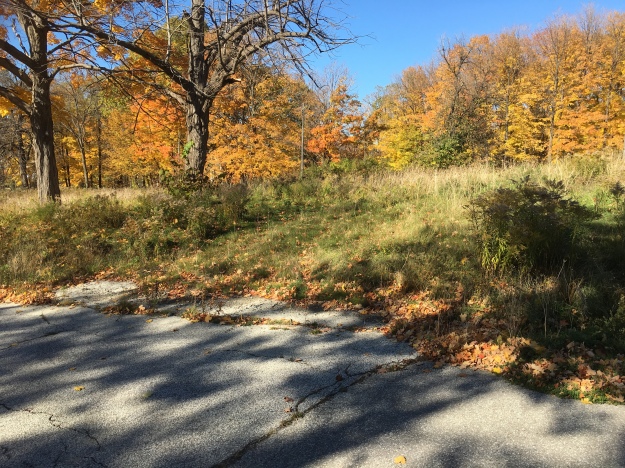 Power lines have been removed from some of the poles but the transformers were left behind.  If these lands are redeveloped these poles will be removed but I wonder what will happen if it is left as a natural area.  Will the poles be taken out or left to fade into the forest as it takes over? 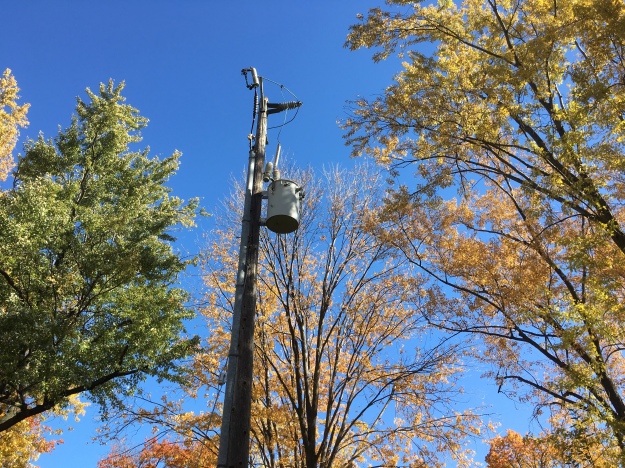 Nature has a way of using everything and switch boxes have become sheltered homes for funnel spiders.

There are some large trees in the woodlot and white tailed deer have made the former community their home.  Fields of milkweeds suggest that this will be a prime habitat for monarch butterflies in the coming years.  Many of the birds have left for warmer climates but the woods must be alive with songbirds in the summer.  It’s getting late in the season but the hardier species of mushrooms can still be found and this log has turkey tails growing around the end and all down the sides. 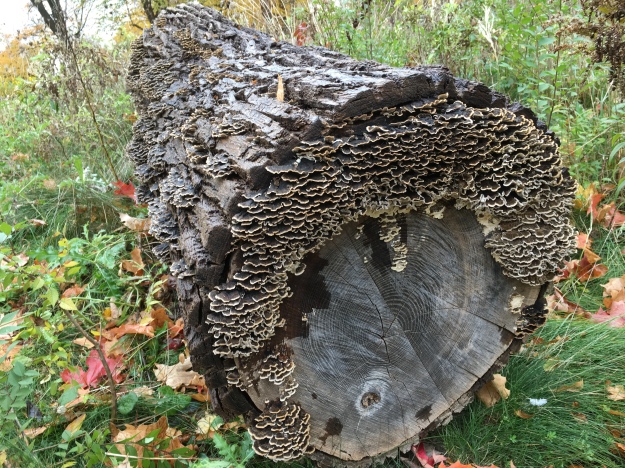 Here and there reminders of the recent past can be found in the woods and the power is in fact, still turned on as we noted on one of the meters.  At night, the street lights still come on to provide a measure of safety in the park.

Whats next for William Baker Park?  If the developers have their way there will be 6,700 new residents living in the 3534 new units they plan to build.  The woodlot will be saved and the rest of it would be cleared for mid-rise condominiums, capped at 15 stories.  At least that was the plan as laid out in the Downsview Secondary Plan from which the map below is taken.  However, Toronto City Council voted 43-0 to request the federal government sell the property to the city so it can be held as a city park forever.   William Baker Park is outlined in blue on the map below while the section of forest to be saved is outlined in green.  On the map the newly created Downsview Park between Keele Street and the Canadian National Railway is small in comparison to the size of the former base.  At the bottom left of the map is a section marked with little squares that was the Stanley Green housing and has already been redeveloped into townhouses.

Having wondered the quiet trails of William Baker Park I am convinced that it should remain a park.  We never made it to Downsview Park and so that waits for another week.

For other military themed posts see: Military Burying Grounds, The Battle of York, The Battle of Queenston Heights, The Rebellion of 1837 and The Arsenal Lands