In a previous post we had looked at The Devil’s Pulpit having approached from the Forks of the Credit road.  Thinking that the fall colours might still hold some charm we decided to hike to the pulpit from the south.  When possible, we like to hike longer sections of the Bruce Trail using two cars.  We met on the Forks of the Credit Road near the end of Chisholm Street where we left one car.  We drove east to McLaughlin Road and then two concessions south through the historic community of Inglewood to Olde Base Line.  There is parking for a few cars west of here where Chinguacousey Road dead-ends.  The Bruce Trail roughly follows the old road allowance north from here.  It was an ideal morning for a hike in the woods with the sun shining and the smell of fall in the air.

The remains of an old split rail fence snake their way through the woods.  These fences were often the first method a farmer employed to divide his fields.  They were easy to build and could be made from material cut from the property.  They also provided the farmer with the option to reconfigure his fields, changing the size and shape of them quite easily. Their biggest drawback came in the amount of land that was used in their construction.  In later years when farming techniques improved and productivity was sought from the greatest amount of land possible.  The wooden snake fence was often replaced with flat wire fencing.

There are several ponds along the side of the trail that appear to have formerly been aggregate extraction sites.  Many of these former quarries along the Niagara Escarpment are now flooded and have become important wildlife habitats.  Mother nature reclaims her own.

Original property owners found that land grants along the top of the Niagara Escarpment were often not the best farmland.   The climax forests provided an initial resource in wood but this was soon exhausted.  Many land owners then sought to make money off the natural resources on the escarpment.  Transportation costs meant that many small quarries could no longer be profitable when local road building projects were completed and the market moved farther from the quarry.  Other uses for the property then had to be developed.  Grants have been offered at various times over the years for property that is reforested.  The production of maple syrup can turn a forest into a profit centre for a few weeks each spring and there are remains of sugar shacks in the woods.

Eventually the trail emerges onto a small section of Chinguacousey Road that provides access to one of these aggregate extraction sites.  Deforest Brothers Quarries is licenced to operate a quarry that is just over 10 hectares in size.  They are allowed to extract up to 20,000 tonnes of material per year.  How ironic that the Deforest Brothers have been cutting down trees to reveal their product. 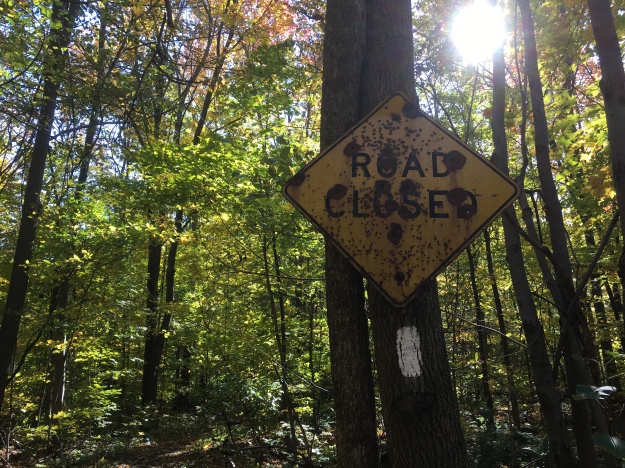 The trail follows the Grange Side Road west for one concession until it reaches the third line, now known as Creditview Road. Once again, the Bruce Trail heads north along the old right of way for the road.  The road was never completed through to connect with the Forks of the Credit Road because the Devil’s Pulpit lies in the way.

The fall colours are still quite vivid on some of the trees but most of them are past their prime. 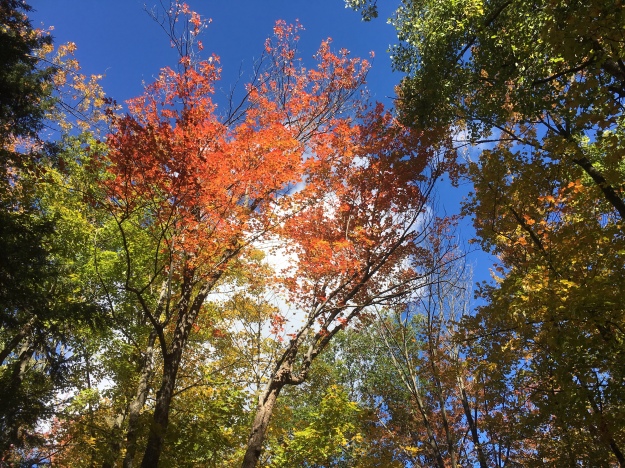 White Baneberry grows in a small patch along the trail.  Birds will eat the berries and the seeds pass through their digestive system and are deposited somewhere else to start a new plant.  Toxins in the seeds are known to have a sedative effect on the human heart muscle and ingestion can lead to cardiac arrest and possibly death.

This beautiful pond is one of several along this stretch of the trail.

When you reach the top of The Devil’s Pulpit the view is quite spectacular at any time of the year.

Stairs and a guide wire help you up or down the side of the escarpment. 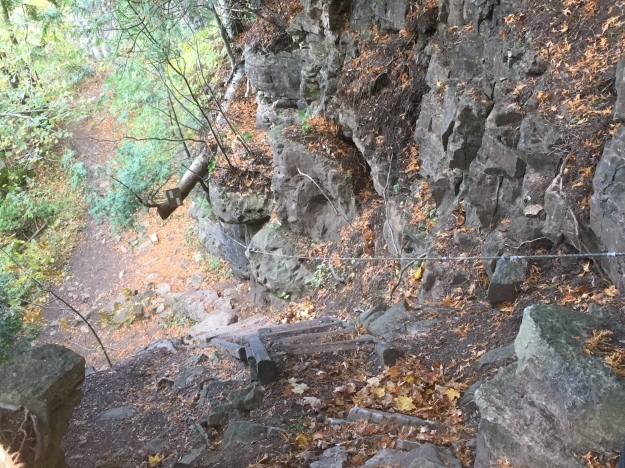 The rock face at The Devil’s Pulpit must have been an interesting place to work every day.  Workplace standards have changed considerably in the last 150 years. 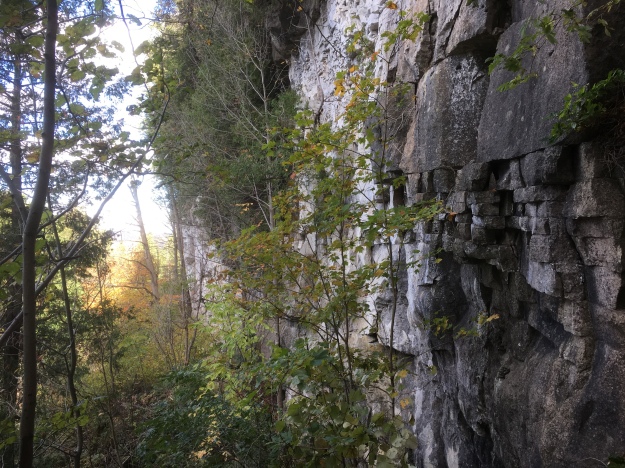 The trail continues to descend and passes the Ring Kiln Side Trail that leads to the Hoffman Lime Kilns.  This 0.6 kilometre trail leads to a dozen set kilns built in a ring for the burning of limestone.  As the trail descends to the former Credit Valley Railway it uses another set of stairs.

On the way back to the car near Olde Base Line we decided to check out the one-lane rail bridge where the CVR was built over The Grange Sideroad. 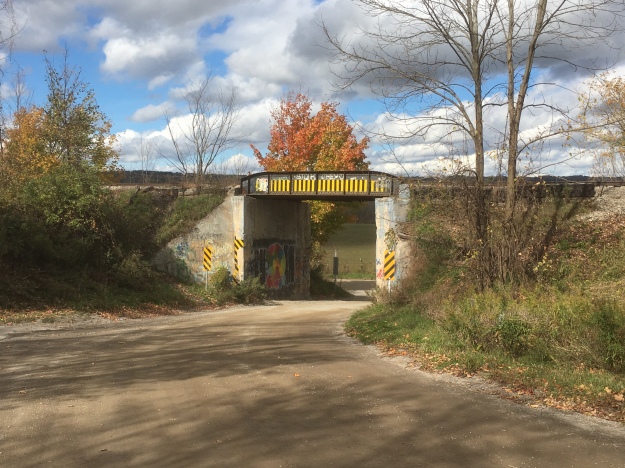 We encountered very few people for such a nice fall day on the Bruce Trail.

2 thoughts on “Bruce Trail – Olde Base to The Forks”