Just west of Palgrave are two culverts made of cut stone that have been given heritage designations by the town of Caledon.  We decided the check them out and found parking on Patterson Sideroad just west of Duffy’s Lane.

The Hamilton & North-Western Railway (H&NW) was built in 1877 as far as Barrie and completed into Collingwood by 1879.  Various sections had been opening upon completion during construction but the official opening was in December of this year.  The next decade saw mergers and extensions until the entire network was taken over by The Grand Trunk Railway (GTR) in 1888.  One of the GTR’s first projects appears to have been the upgrade of trestles across the Humber River and a nearby tributary known as Coffey Creek.  The rail line passes through this area on an extensive berm which suggests that the track originally crossed the waterways on high wooden trestles.  Culverts of cut stone were built below the trestles and later buried when the trestle was filled in to match the berms on either end.  The map in the county atlas shows the railway during the two years that it was known as the H&NW.  The Humber River crossing has been coloured in blue while Coffey Creek on the left is a lighter blue. 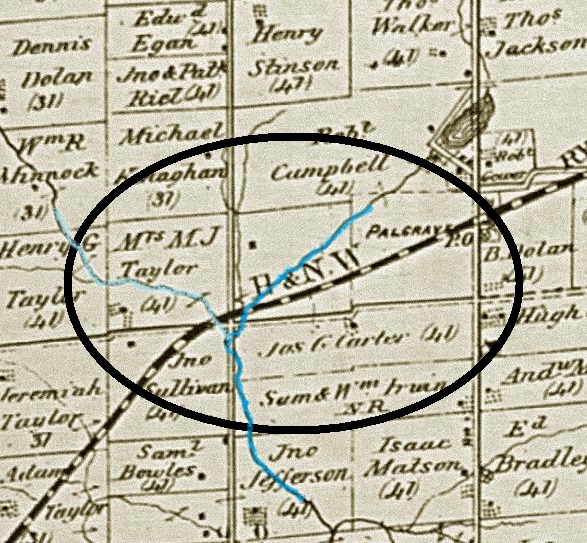 Just east of Patterson Road the trail crosses Coffey Creek and the first of the two stone culverts.  By climbing down the rail berm you can reach the mouth of the culvert on both ends but there is no way to get inside it.

Duffy’s Lane is crossed by a steel railway bridge set on abutments of cut stone that were likely laid at the time of railway construction.

Bolete mushrooms are a class that contains about 200 species characterized by the lack of gills.  Instead, these mushrooms have a sponge-like surface with thousands of pores from which their spores are released.  Many bolete mushrooms are edible, some of them are the choicest ones.  There are a few of them that can be poisonous though and so you must really know what you’re eating.  If you crush the edge of the mushroom or the stalk and it turns blue it is likely toxic.  One certain trait of the poisonous ones can be found on the pore surface.  If this surface is white it may be okay but if it is red, the mushroom is definitely poisonous.

The Caledon Trailway is 35 kilometres long and is suitable for hiking and cycling.  It is wheelchair accessible and frequented by joggers and dog walkers and sections of it are used by horse and riders.  The trail surface is crushed gravel and on this particular day it was lightly used.  East of Duffy’s Lane there is a section that has a wooden railing along the side.  This is on the section that crosses the Humber River.  We decided to climb down the south side of the embankment first as we could clearly see the top of stone culvert from the top.

The culvert on the Humber River is also made out of blocks of cut stone like the one on Coffey Creek.  These have been cut precisely so that in most places they fit together without the use of mortar. 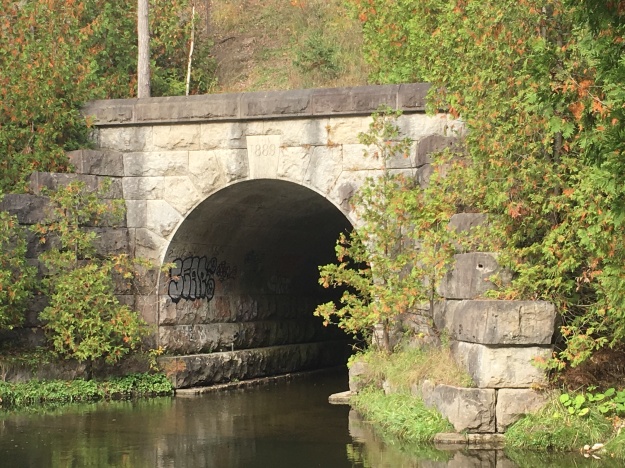 The keystone is dated 1889 on the culvert which was designed by Joseph Hobson who was the chief engineer for The Grand Trunk Railway.  The keystone is a critical element of a mason’s arch.  It is the last piece installed and provides downward and outward pressure, locking the rest of the stone blocks into place.  The whole thing is held in position by the weight of the railway berm on top of it. 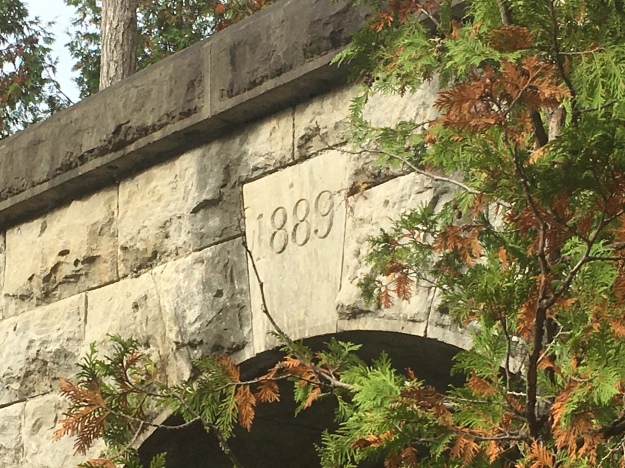 The view out of the south end of the culvert looks onto a potentially interesting fishing hole. 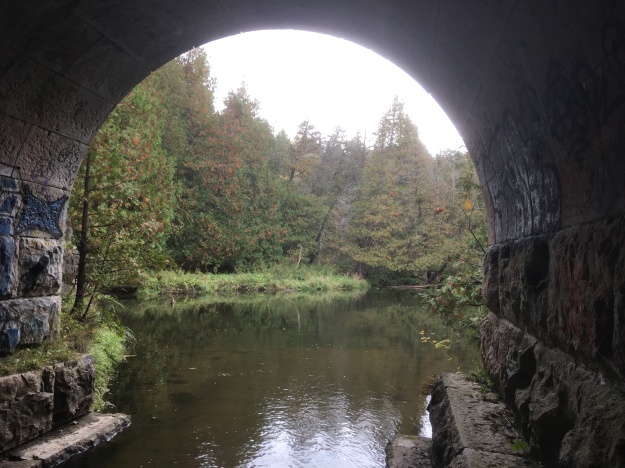 When the water is low it is easy to walk the ledge along the west side of the culvert if you enter from the north end.   Access from the south end is restricted due to the growth of cedars and deposits of mud on the walking surfaces.  The picture below looks back toward the north end.

The floor of the culvert on The Humber River has been lined with thick boards but there was no wood in the bottom of the culvert on Coffey Creek.  The planks appear to be trapped under the stone foundation and extend the full length of the stone walls at both ends of the tunnel.

These two stone culverts make an interesting historical site that is worth the effort to investigate.  We have previously covered some of this section in our feature on The Great Trail – Caledon East.