When Rouge Park was created in 1995 it was about 40 square kilometres in size.  Since then, it has been doubled and now consists of 79.1 square kilometres of parkland.  There are several trails through the park already and many more are planned.  We decided to eventually explore all the trails but this week we were going to check out the southern end of the park.  To do so we parked in the free lot just off of Twyn Rivers Drive near the Maxwell Bridge of the Little Rouge River, just across the road from the remains of Maxwell’s Mill.  The bridge has a historic designation and can be reached from the parking lot by following a short stretch of the Orchard Trail.

The Mast Trail runs for 2.2 kilometres and, along with Riverside Trail (3.2 kilometres but currently closed) form a loop through the lower end of the park that connects to the campground near the 401.  The Mast Trail runs through an area that was once harvested for the abundant tall straight trees that made excellent masts for ships.  The trail roughly follows an old logging road that was used to remove the trees once cut.  Today the area is home to mature forests and some open meadow that made for an interesting hike in spite of the overcast conditions.  Be sure to read the signs about ticks as you enter the trails and remember to check yourself at the end of the hike.  On this day I saw one walking across the back of my hand before I had a chance to have a methodical look and a shower.

The trail is lush and moss growth thick on the rocks along the way. 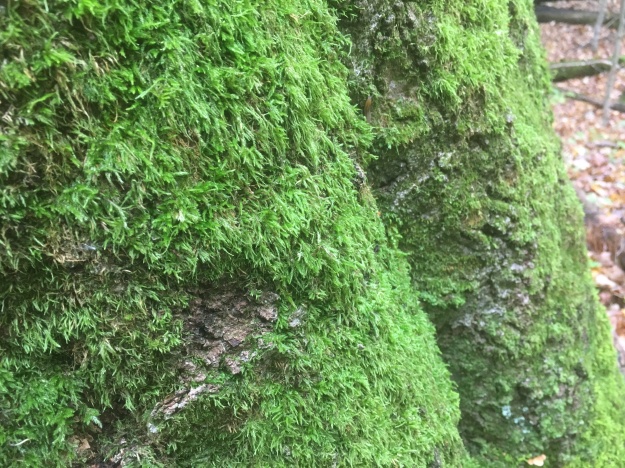 Even though we are late in the season, there are still a few puffballs growing along the sides of the trail.  They typically grow until October and since the leaves on the trees appear to be about a week behind changing colour this year, it isn’t surprising to see these large mushrooms.  Unfortunately, this one was picked just for the “fun” of smashing it. Giant Puffballs are one of the best mushrooms for harvesting and eating.  However, since you are not allowed to do this in the park, please leave them to produce their spores for the next generation of mushrooms.

One of the distinctive features of the Mast Trail is the set of log stairs that climbs the side of the hill.

These mushrooms resemble Tree Volvariella except that mushroom typically grown by itself rather than in colonies like these ones.

Asperagus seeds can be harvested when the berry turns red.  You can split the fruit open with your fingernail and then remove the seed.  Rinse them under cool water and then lay them out on wax paper to dry for about a week.  These dried seeds can remain viable for up to three years but are most likely to germinate if planted about 1/2 inch deep within the first year after harvesting.

With the coolness of the morning, the bees were inactive.  They usually need the temperature to be above 13 degrees Celsius before they become active.  These two were sitting on a sunflower waiting for the day to warm up a little.

Caper Valley Ski Hill operated in the Rouge Valley until the late 1970’s.  Today the hill is still clear of trees but the top of the ski lift is marked by only the concrete pad that supported to the tow rope pulleys.

The archive photo below shows the ski hill in the spring of 1975. Flood waters are racing in the river in the foreground.

Apricot Jelly is one of the less common forms of mushrooms found in Ontario.  Jelly mushrooms have a fruiting body where the exposed surface is fertile and has microscopic structures called basidia which are club-shaped and produce the spores.  Apricot Jelly is considered edible but is usually added to food for the attractive colour it adds to the plate rather than its food value or taste.

Having been only to the southern corner of the park there is no doubt that we’ll be back to check out some of the other trails in the area.

Other things to check out while you’re in the area: Maxwell’s Mill, Toronto Zoo, Toronto’s Only Suspension Bridge