Over the years we have covered large sections of the Bruce Trail without recording where or when we went hiking.  In the past four years Hiking the GTA has blogged about most of the Toronto Section as well as other parts of the trail.  We have started to look at the portions we need to visit in order to at least complete this one section of the 900 kilometre trail.  Today we decided to hike the trail north of the Forks of the Credit as far as Hurontario Street.  We parked one car near Dominion Street and took a second one to Escarpment Sideroad on the east side of Hurontario Street.  This property belonged to Mrs. Maxwell in 1877 when the county atlas was drawn.  Her house is circled in green and the trail we hiked is also marked in green on the map below.

Mrs. Maxwell owned this little story and a half Georgian style house.  This design of house was popular from the 1790’s until about 1875.  This house likely replaced an earlier log cabin and was built around 1855. 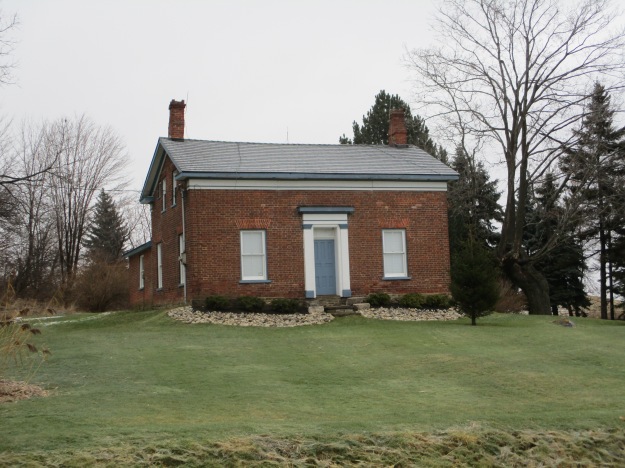 The Bruce Trail conveniently passes under the six lanes of Hurontario Street or Highway 10.

The trail follows Escarpment Sideroad for a half the concession before entering the bush on the north side of the road.  The view along the escarpment from here was enhanced by a low level air inversion that was holding fog along the side of the escarpment.  The fog makes the hills in the distance look like they are covered with snow.

The trail passes through private property and it is clearly marked requesting that you stay on the trail.  One reminder of recent farming activity is this old wind mill that once drew water for livestock.  An old metal crib near the windmill may have served as a feeder.  It has been awhile since farm animals grazed in this area and the forests are taking back over.

The trail follows the old road allowance and there is evidence of property lines marked with fences on either side.  The road allowance is one chain wide as per the original survey.  One chain is equal to 66 feet or 22 metres long.  The fences haven’t been maintained in a few years and there are many places where the trees have grown up around the wire.  Deer blinds in the trees indicate that the road is still used by the local wildlife.  The structure in the picture below was either an elaborate deer blind or a pretty cool tree fort.

Polypore mushrooms get their family name from the thousands of little pores that cover the underside of the caps.  Many of these fungi can survive over the winter and will grow on favourable days all year around.  Some species can live for several years.  These bell shaped ones pictured below have a white ring around the outer edge and may be Berkley’s Polypore. 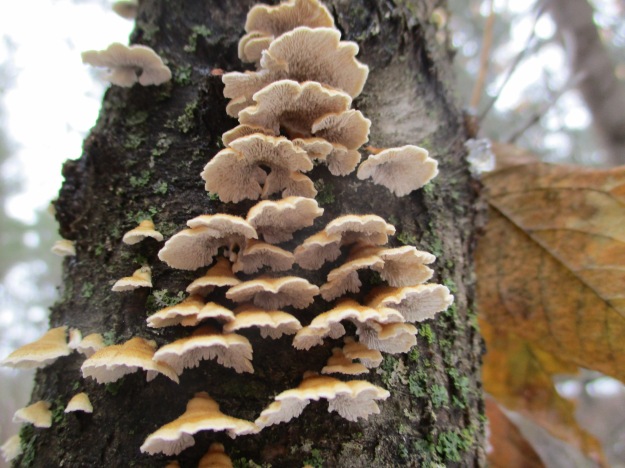 Standing in the woods some distance off the trail is an old cottage which can only be seen during the winter months.  It looks like it has been out of use for awhile but we didn’t go near it. 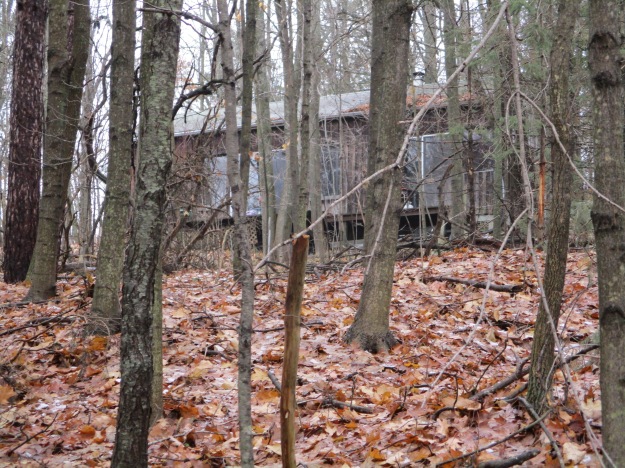 Mushrooms are one of the few sources of colour in the plant world at this time of year.  This Stalkless Paxillus has bright yellow gills.

Pileated woodpeckers can dig large holes in a dead tree while they seek the bugs within.  The wood shavings on the ground in front of this tree reveal that the bird has been working here very recently. 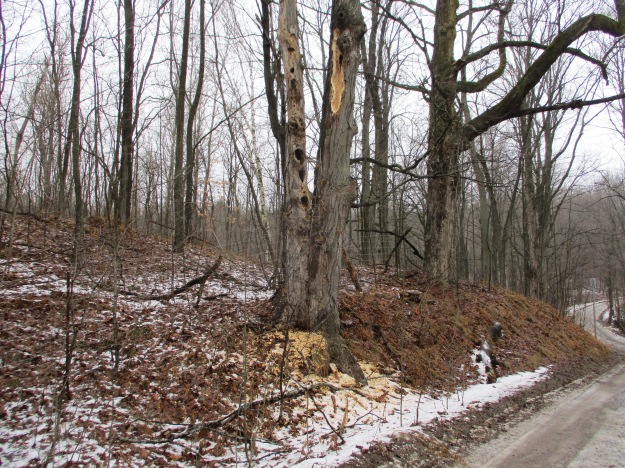 Following the main trail when you get to the Forks of the Credit Provincial Park will take you on a loop around the ponds and near the old mill in the park.  Since we had previously covered this section in the blog linked above, we decided to cross the Dorothy Medhurst Side Trail off our list.  This is a 440 metre trail that makes a quick decent to Dominion Road where it joins the main trail again.  This cuts about 3.5 kilometres off the hike compared to following the main trail.

Following Dominion Road south will bring you through the hamlet of Brimstone.  This used to be a bustling community of quarry workers in the 19th century.  In those days Big Hill Quarry sent quarried rock to market by loading it on the Credit Valley Railway on the opposite side of the Credit River.  This was done using an aerial tramway.  The unloading end of the tramway was explored in our story on the Cox Property.  From the bridge on Dominion Road you can see the Forks of the Credit.  This is the opposite view from last week when we were at the point in the middle of the Forks of the Don.

We arrived back at the car looking up at The Devil’s Pulpit and the trail toward Old Base Line.  This section of the Bruce Trail proved to be interesting and we can’t wait to check out another section in the near future.