Forks of the Credit Provincial Park has many things to offer from hiking trails to closed roads and historic ruins.  A Niagara Escarpment study in 1968 made the recommendation that a park should be created near the Forks of the Credit.  The Government of Ontario accepted the proposal and in 1985 the Forks of the Credit Provincial Park was officially opened.  Official parking is found off of Mclaren Road but it is metered and $7.50 for 4 hours or $14.00 for the full day.  We roughly followed the route marked in green on the 1877 county atlas below. 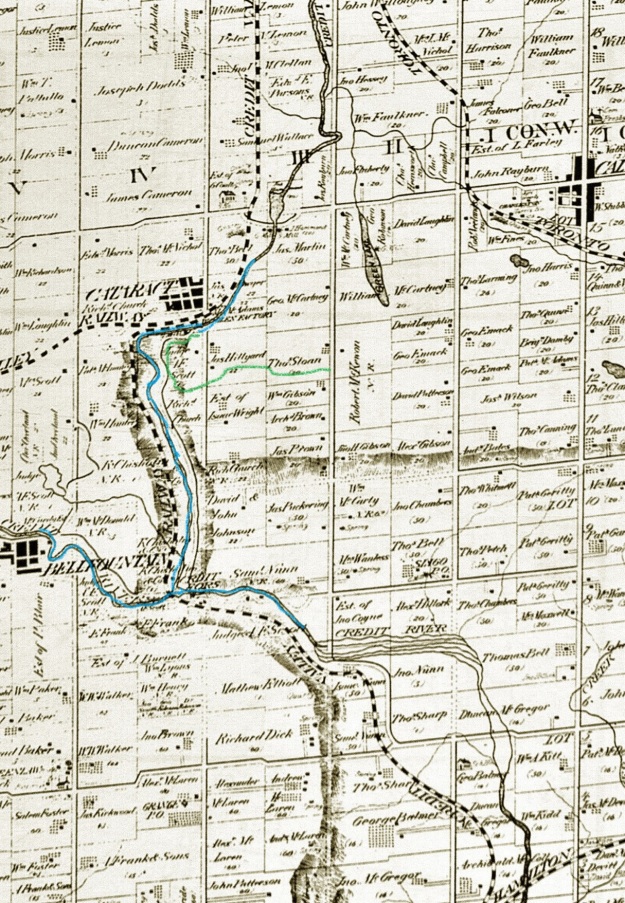 From the parking lot, you can follow the Meadow Trail past Kettle Lake, featured below, and on until you come to a washroom facility at the junction of the Dominion Trail.  Along the way, you will pass a short trail called Kettle Trail which links to the Trans Canada Trail.  To get to the falls you will use a portion of the Bruce Trail as a link.  It is good that someone has taken the time to mark the trails with little white signs “falls” and “return to parking” to make the direct route less confusing.

The Credit River runs through the park as does The Bruce Trail.  From the south, the Bruce Trail follows old Dominion Road north from Forks of the Credit Road through the ghost town of Brimstone until it reaches the entrance to the park.  From this point the old road becomes Dominion Trail and the road is closed.  A portion of it was washed out in 1912 and never replaced.  There are also blue Bruce Trail side trails that lead to the ruins at the cataract falls, making the park a great place to hike.

In 1879 the Credit Valley Railway built a1,146-foot wooden trestle, 85 feet high to cross the valley.  At the time it was the longest curved trestle in Ontario but safety concerns led to much of it being filled in by dumping gravel through the trestle.  From there the line heads north through the area of the park.  It runs along the edge of the river and crosses it on the bridge shown below. 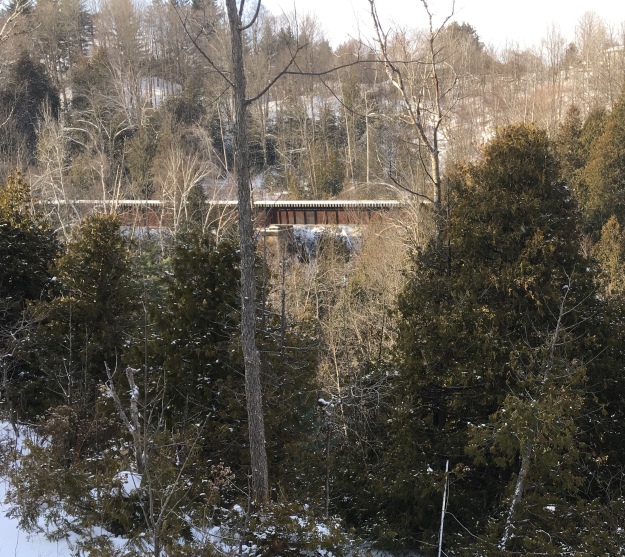 Cataract Falls is 13 metres tall and 9 metres wide.  Like many waterfalls, it takes on a spectacular formation of ice in the winter months.  The falls appear to be much wider because there are so many cracks in the shale layers that seep water which adds to the majesty of the falls.

A sawmill and two grist mills stood on this site before it was converted to the production of electricity.  The older parts of the mill were constructed of stone which was apparently quarried behind the waterfalls in the winter time.

The foundations of the Cataract Electric Company stand on the crest of the falls.  This had been the site of mills since 1820 and the power company operated from 1899 until 1947 when it was deemed to be too inefficient to continue.  The frozen waterfalls can be seen to the right of the picture below. 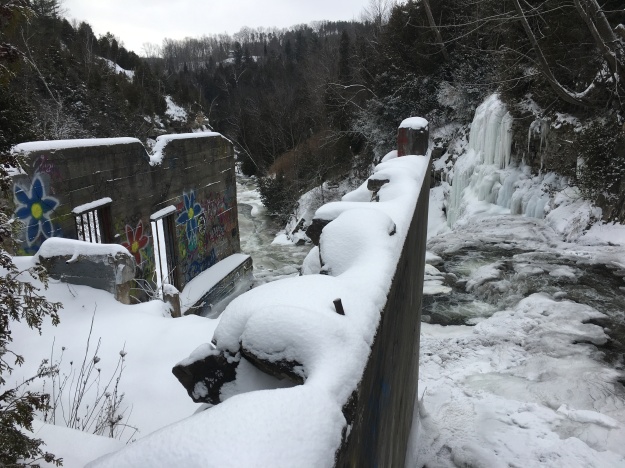 Cataract Lake was held behind the dam and was allowed to survive the closing of the electric power generating plant.  John Deagle was interested to increase the output of his power generating plant and so had begun to construct a tunnel from the lake to the mill wheel.  A major flood in 1912 washed out the dam and put an end to Deagles dreams of tunnelling.  A concrete dam was built as a replacement.    In 1953 the dam was destroyed by dynamite and the lake was drained.  The railway had been concerned that the lake was undermining the railway tracks.  The sluice gates remain from the old dam and are now used as abutments for the footbridge on the Ruins Trail.

A better perspective of the old mill buildings can be gained from the footbridge.

The Forks of the Credit Provincial Park has many trails and interesting things to see but parking fees apply.  It is perhaps better to park at the end of Dominion Road and walk in along The Bruce Trail.

3 thoughts on “Forks of the Credit Provincial Park”