Whether it’s a long weekend or you want a long hike on the weekend there are several excellent trails in  and around the GTA that will let you challenge yourself.  Along the trail systems there is an abundance of wildlife, some amazing views and a lot of local history.  This post looks at some of the longer hikes where you can spend several hours if you wish to complete the entire hike.  Being able to park a car on either end of the trail will keep you from needing to backtrack where the trail is not a loop.  For convenience the hikes are grouped by geographic region.

Terra Cotta Conservation Area is full of trails.  The Bruce Trail passes through the park along with several smaller trails.  The park also features the remains of the Cataract Electric Company, an early power generating plant on the Credit River.  Along with the Cataract Falls the park includes the Terra Cotta falls featured below. This hike includes parking fees.

The Devil’s Pulpit is accessed via the Bruce Trail and is marked with white slashes.  A short side trail leads to the Hoffman Lime kilns, an artifact from the industrial era at the Forks of the Credit.  The trail leading to the Devil’s Pulpit is a challenging climb assisted in one place by an anchored cable, pictured below.  The view from the top makes it well worth while.  The trail continues along the old right of way for the third line which was never opened due to the escarpment face.

The Stonecutter, or mason’s dam, is located between the Forks of the Credit and Belfountain along the Credit River.  This hike includes several possible side trails and two old dams including a rare cut stone one.  The picture below shows the abutments for an old rail bridge used to carry quarried stone from one of the quarries along the hike.

Limehouse is home to a former centre of the lime industry that fed early construction in Ontario.  The Bruce Trail passes through the Limehouse Conservation Area where it passes the remains of old lime kilns and a restored powder magazine.  From there it follows the right of way of the former Guelph Radial Railway before using two ladders to climb through the Hole-In-The-Wall.  The stone arch from the old lime mill raceway is pictured below.

The Barber Dynamo is the first example in the area of industry using water power to create electricity and transmit it over wires to power a mill.  The dynamo is 3 kilometers downstream from the Barber Paper Mills in Georgetown.  This hike follows a Bruce Trail side trail which is marked in blue slashes.  The double intake penstock inside the dynamo remains are featured in the photo below.  The hike can be extended past the dynamo or continued north of the paper mills all the way to Terra Cotta.

The Spencer Gorge contains a pair of waterfalls named Webster’s Falls and Tews Falls.  The Gorge was once the size of Niagara Falls and the hike will take you to the Dundas Peak where you will have a great view back up the gorge.  Tews Falls is seen in this early January visit.  This hike includes parking fees.

Ancaster has 6 waterfalls that can be accessed through a series of trails.  We visited them in the winter when they were frozen, but they make an excellent hike at any time of the year.  A frozen version of Sherman Falls is seen in this picture which was taken on the coldest day of the year.

The Gap is a cut in the Niagara Escarpment near Milton that can be seen from the 401 and in the picture below.  It is accessed along the Bruce Trail and provides excellent views toward Kelso and Rattlesnake Point.

Crawford Lake has several trails including a fully wheelchair accessible one that circles the lake. Crawford Lake is a meromictic lake which led to the discovery of an 800 year old native village.  Several longhouses have been reconstructed to display the 10,000 artifacts that have been excavated at the site.  The morning mist rises off of Lake Crawford in this early morning shot.  This hike includes parking fees.

Nassagaweya Canyon was cut through the escarpment at the end of the last ice age and it separates the Milton Outlier from the rest of the escarpment.  The trail leads between Rattlesnake Point and Crawford Lake and part of it is featured in the cover photo.  The view across the canyon toward the cliffs on the far side is seen below.  Parking fees are in effect in both places.

The Lakefront Trail in Mississauga is part of a trail that runs for 740 kilometers along the shore of Lake Ontario.  Depending on the sections you choose to visit there are many things to be seen along the trail.  Rattray Marsh is full of birds, flowers and the occasional white tailed deer.  The eastern portion runs past the Arsenal Lands where the military had operations since the early 20th century.  The Cawthra family owned the Adamson Estate at the eastern limits of Mississauga. The picture below shows one of the old baffles on the firing range. 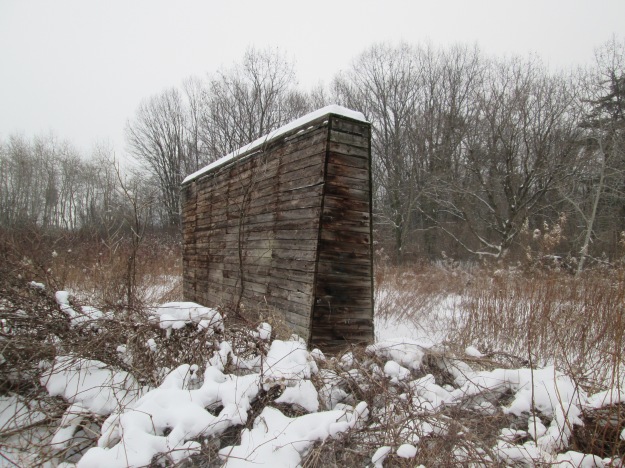 Island Lake was formed at the end of the last ice age when an iceberg was buried in the outwash from the glacier.  When it melted it formed a kettle lake which was later expanded to create the Orangeville reservoir, now called Island Lake.  The 8.2 kilometer trail around the lake includes several bridges over the water.  This hike includes parking fees. 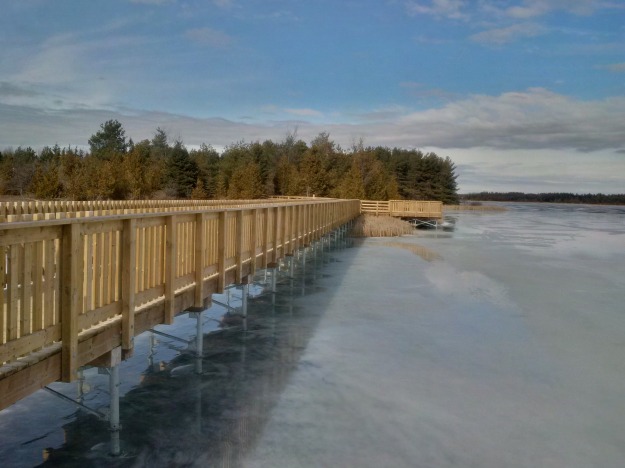 The Toronto Islands have been forming since Lake Ontario took it’s present size a few thousand years ago.  When the town of York (Toronto) was founded it was a peninsula which was later cut off from the main land by a storm. Today the Islands have been greatly expanded by filling in the lake to create new land.  There are extensive trails, an amusement park for children and even some abandoned places to explore like the foundations of former homes as seen below.  This hike includes ferry fees. 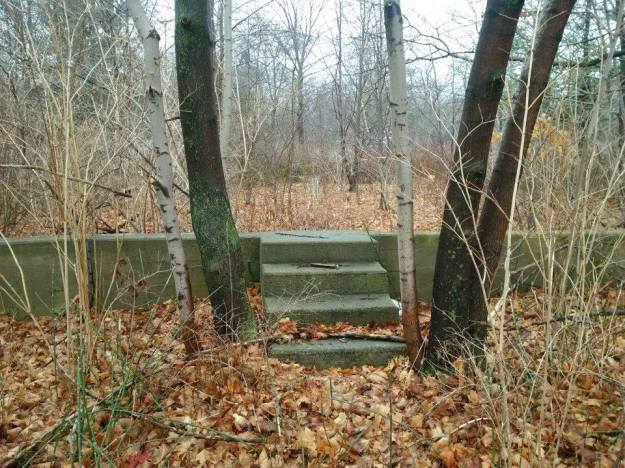 The Leslie Street Spit is an entirely man-made peninsula that extends nearly five kilometers into Lake Ontario.  It is a popular spot for bird watchers, cyclists and hikers. A large colony of cormorants is nesting on the spit and several species of mammals and snakes have also taken up residence.  The picture below shows one of several side trails on the spit.

Of course, this is only a small selection of the trails in the GTA, hundreds more are described at http://www.hikingthegta.com