The story of Island Lake dates back to the retreat of the last great ice age in North America. The Wisconsin Glaciation period ran from about 85,000 to around 11,000 years ago.  When the glacier was advancing it swept up all manner of debris and carried it along.  As the ice retreated it left the Great Lakes, the Scarborough Bluffs and the Oak Ridges Moraine. The soil and rocks that make up the glacial debris are deposited by the glacier as it retreats in a land feature known as moraine.  Occasionally a large chunk of ice will calve off of the glacier and get buried in the moraine created by the outwash from the melting ice.  When these ice chunks eventually melt they leave a hole in the moraine.  These holes, known as kettle lakes, can be up to 10 meters deep and fill up with water.  North east of Orangeville a kettle lake formed on a piece of land that would later belong to George Island.  The 1877 county atlas below shows the Island property, along with the kettle lake that formed there.  First line east is seen to deviate to go around the east end of the kettle lake.

Michael Island came to Mono from Ireland in about 1830 and settled on this land grant.  He raised a family including his son George who was born in 1834.  Mary Ann Shaw and George were married in 1866 and had six sons and a daughter.  Mary Ann died in 1909 and George followed in 1913 but by this time their son Frank C was running the farm.  In 1967 it was decided to create a reservoir for Orangeville and the Island farm was flooded by the construction of two dams.  These dams are used to control the outflow of the reservoir into the Credit River.

Originally known as Orangeville Reservoir, the park has been developed into a playground for all four seasons.  Along with cross country skiing trails there are snowshoes for rent so you can fully experience the season. Ice fishing huts are also set up on the lake.  We saw cracks appearing in the ice and some parts of the lake were already marked as off limits.

A series of trails extend throughout the conservation area but we chose to focus on the 8.2 kilometer Vicki Barron lakeside trail.  The trail makes it’s way around the entire lake except the most eastern portion which is a wildlife sanctuary.  It crosses the lake at the two eastern islands using a series of bridges before heading back toward the parking lots.  The trail is named after Vicki Barron who worked for Credit Valley Conservation for 24 years and retired in 2001 as the General Manager. The first 2.5 kilometers of trail were opened that same year.  The trail has now been completed around the lake with plans to link it to other trails in the neighbourhood.  The Credit Valley Trail is currently in the planning phase and envisions a trail from Island Lake to Lake Ontario. The trail is seen below as it runs through the straight rows of trees that reveal a planted forest. 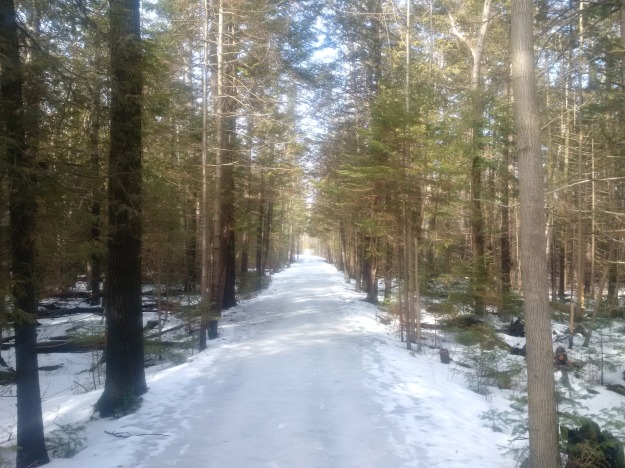 There are many areas were the sun has melted the ice and snow clear and in one of these stretches we encountered an unusual fellow hiker.  This wooly bear caterpillar normally spends the winter hibernating under a rock or piece of bark.  There was a 52 degree Celsius change in temperature between this Saturday (12 C) and last Saturday when it was minus 40 C with the wind chill while we were visiting Frozen Waterfalls near Ancaster.  The sudden warm up likely tricked this little one into thinking spring had arrived.  Legend has it that the thicker the black bands on the caterpillar, the harsher the winter.  This specimen has a wide red-brown band in the middle which should indicate a mild winter. Perhaps…

When Michael Island arrived on his 100 acre parcel of land it contained the kettle lake, a cedar swamp and the rest was a forest of mature trees.  He started to clear the land and build a farm to make a life for himself and his family.  As George and his brothers grew up they would have helped with the farm chores including building and maintaining fences. The straight line of moss seen in the photo below is revealing an old fence line.

In 1949 Frank Zamboni invented the first ice resurfacing machine and it has since taken on his name.  To encourage ice skating, the park resurfaces a trail on the lake as can be seen in the picture below. 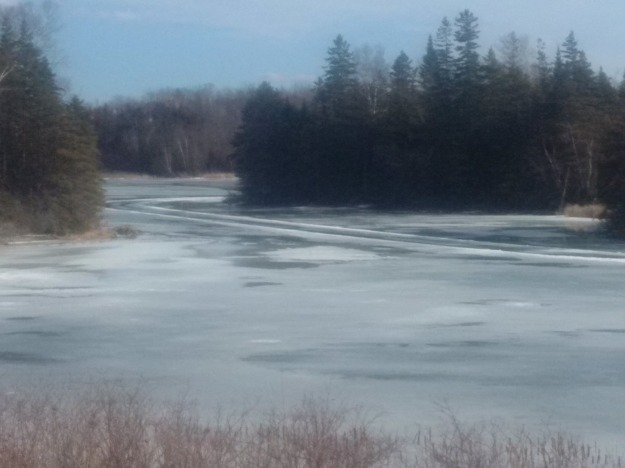 There are several of these wooden bridges built to connect the trail and provide places to sit, relax and enjoy the day.  These bridges were built with the help of many partners in a program known as Bridge The Gap that connected the north and south shore trails. 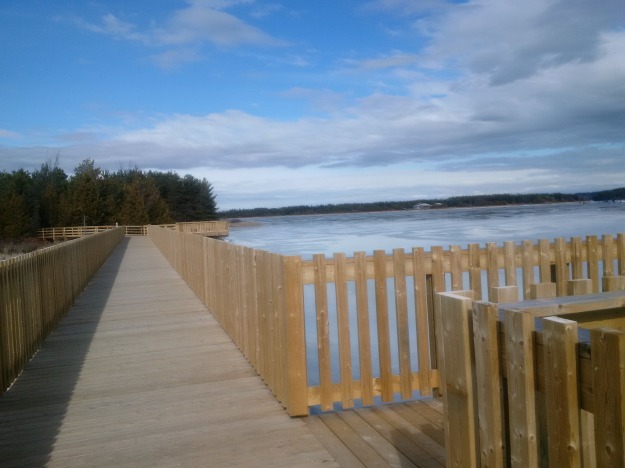 The longest of these bridges runs from the north side of the lake to the first of two islands. The original kettle lake is located off the end of these islands.  The trail map posted in the park shows approximate water depths.  Much of the lake is about 6 feet deep but there is one area marked at 22 feet.  This is the location of the kettle lake on the Island family farm and is somewhere in the middle of the picture below.

With the water level reduced for the winter the beach and bandstand are left to wait for the summer crowd to return. 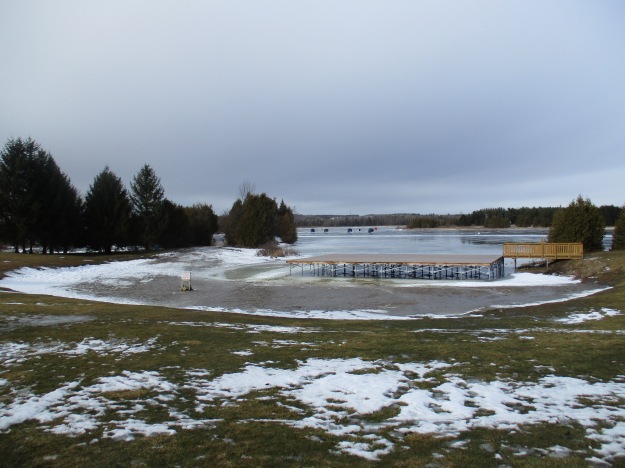 Along the south side of the lake is a small stream flowing into it.  This is seen on the historical atlas where it entered the original version of Island Lake.  These are the headwaters of the Credit River and will eventually flow into Lake Ontario at Port Credit.

Near the parking lot are a couple of buildings.  There are a pair of old blue School Crossing signs that mark the site of The Outlook Inn.  This is an Outdoor, Environmental and Earth Education Centre operated by the Upper Grand District School Board.  Behind the parking lot is a shorter trail known as the Sugar Bush Trail which runs for 2.3 kilometers.  The picture below shows the sugar shack where maple sap is boiled down to make maple syrup.  A large stockpile of wood has been cut in preparation for the sap which will be running around the middle of March.

We saw plenty of wildlife tracks in the snow and with swimming and canoe rentals it looks like a park that requires more than one visit.