February 15-21, 2016 is Heritage Week in Ontario and we have a large number of old mills that form a significant part of our industrial heritage.  Mills were very often the first buildings in a location where a town would eventually start.  When the counties and townships were surveyed in the 1790’s in preparation for settlement, the surveyor was charged with identifying suitable mill seats.  These were typically places where there was a large enough water supply to turn the wheels of a saw mill or grist mill.  Rivers would be dammed and a mill pond created to provide water storage for dry seasons.  Places where a large head, or water drop, could be created allowed for greater power production.  The buildings that ran Victorian industry were known as mills and they did more than just cut wood and grind grain.  Over the past couple of years we have visited a number of the old mills in and around the GTA and present here a pictorial of various mills and the links to their respective stories.

The first mill in York (Toronto) was constructed in 1793 at the request of Lieutenant-Governor Simcoe and this was the first industrial site in Toronto.  It was known as the King’s Mill after King George III of England who was the reigning monarch at the time. The mill went into operation the following year when the mill wheels and gear systems arrived from England where they had been forgotten the year before.  A series of fires caused the destruction of the mills on this site until the fourth one, known as Gambles Mill, was destroyed in 1881.  After sitting in ruins until 1914 it was restored and today we call it The Old Mill. 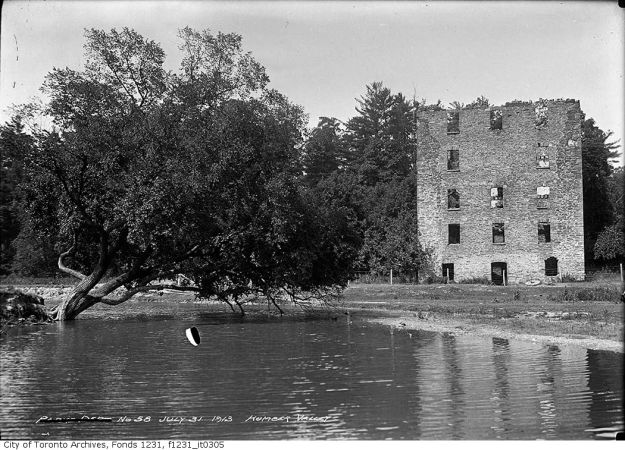 The Barber Paper Mills in Georgetown were founded in 1837 by the Barber Brothers who had helped James Crooks open Upper Canada’s first paper mill in Crook’s Hollow in 1825. The paper mills in Georgetown operated for 111 years until they closed in 1948.  The buildings were abandoned in the 1970’s and now may be partially restored as part of a development proposal. 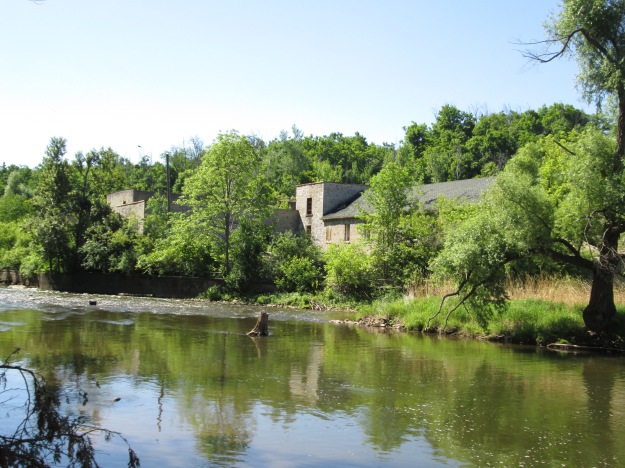 The Barber brothers built themselves a dynamo to power their paper mills.  This was one of several power mills that were set up in the late 1800’s to generate electricity for our early industry.  The remains of the Barber Dynamo are located about 3 km downstream from the paper mills. 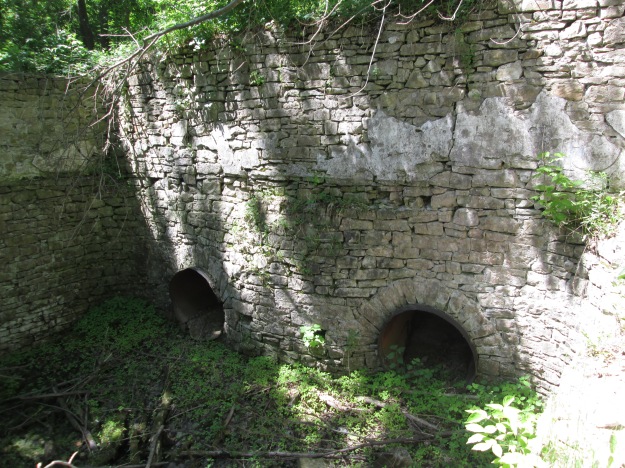 The Darnely Grist Mill was operated by James Crooks and this old structure was completed in 1813.  As noted above, Crooks opened the first paper mill in the colony near this grist mill.  The building was converted into another paper mill in 1860 when Crooks died. 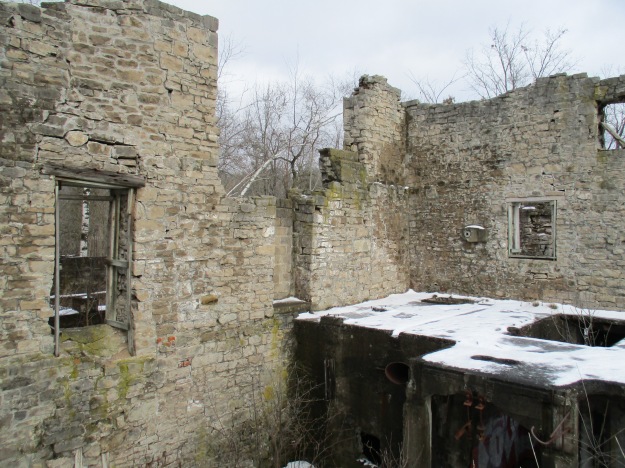 In 1843 the Barber Brothers, William and Robert, decided to expand their Georgetown mill operation by buying William Comfort’s farm and mill site just south of Streetsville.  In 1852 they built a 4 storey wollen mill.  When it burned in 1861 their workers just built a new one and opened again only three months later.  Within 10 years it was the fourth largest textile mill in Ontario.  Their mill and the worker’s housing they provided became known as Barbertown. 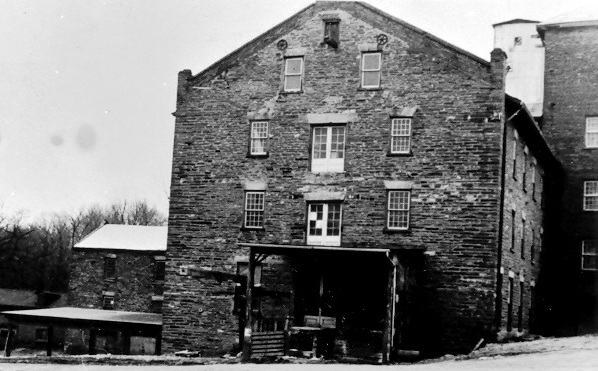 The Rockwood Woolen Mills were started in 1867 by three brothers named Harris along with a brother in law.  They became known for quality blankets, sheets and underwear. Their original building burned down in 1880 and was replaced with a stone building in 1884.  During the first world war they worked 24 hours a day to supply blankets to the military but by 1925 they were closed.  Fire destroyed the building in 1965. 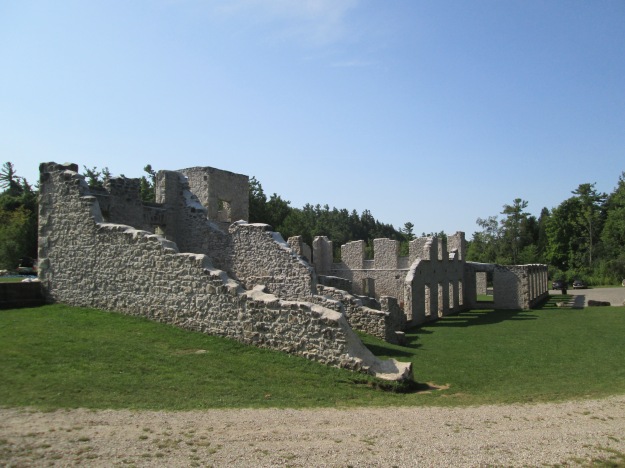 In 1842 William and Robert Bruce bought a mill site that had been started in 1829 by Casper Sherk.  They built the grist mill pictured below in 1858 using some of  the wood from the original mill.  Bruce’s Mill still features a nine foot wide Fitz Overshoot Waterwheel housed behind the steel grate on the left side of the building. 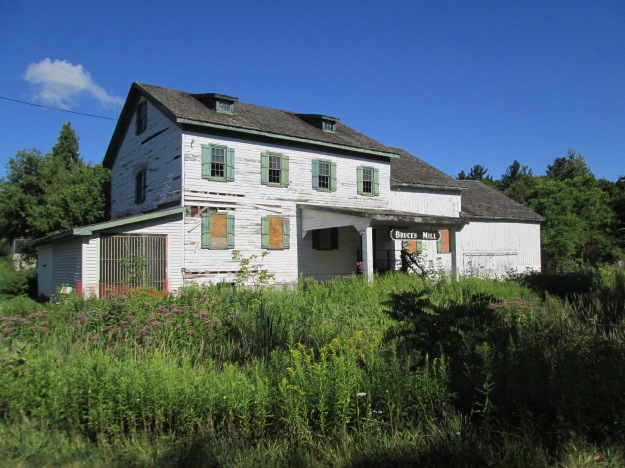 Alton still has more than one mill still standing.  The cover photo shows the 1881 knitting mill that was built by Benjamin Ward.  The picture below is of another mill from the same year.  William Algie operated Beaver Knitting Mills which became famous for it’s fleece lined underwear.  It is seen from across the mill pond in this picture. 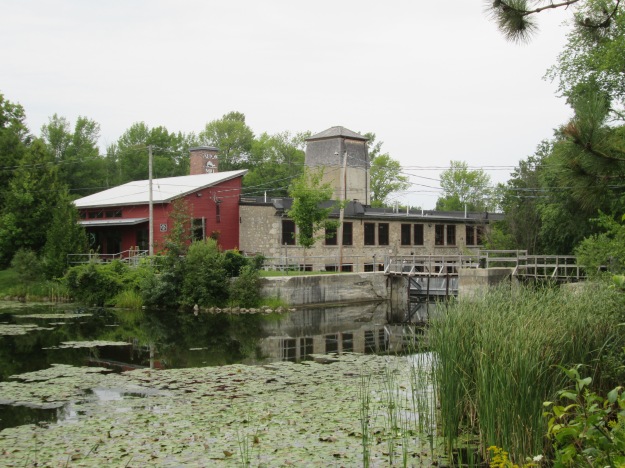 In the early 1830’s the government set up a 9,800 acre reserve for native peoples in the area that is now known as Coldwater. In 1832 over 500 bushels of grain were harvested and the need for a grist mill became apparent.  A saw mill was constructed first and by July 1833 it was busy cutting the wood for the grist mill.  By April 1834 the grist mill was completed and opened for business.  The saw mill was closed in 1874.  In 1880 the mill changed hands again and extensive modifications began.  The third story was added and by the end of the decade the undershot water wheel was replaced with more efficient turbines.  These turbines are still on display behind the mill. 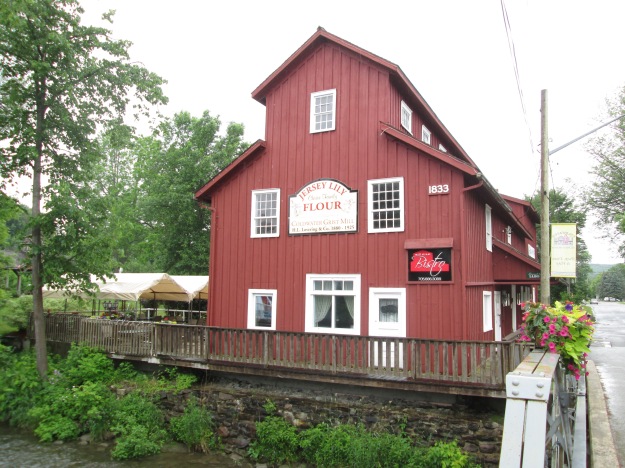 John Nicol arrived in 1828 and built a grist mill on this site.  As the farming community grew around the mill it was converted to also be a feed mill.  It provided flour to farmers and feed to their livestock until 1900 when it burned down.  The community was without a mill until 1907 when it was replaced with this current building.  The settlement came to be known as Nicolston when the post office arrived.  The turbines are still on display on the property. 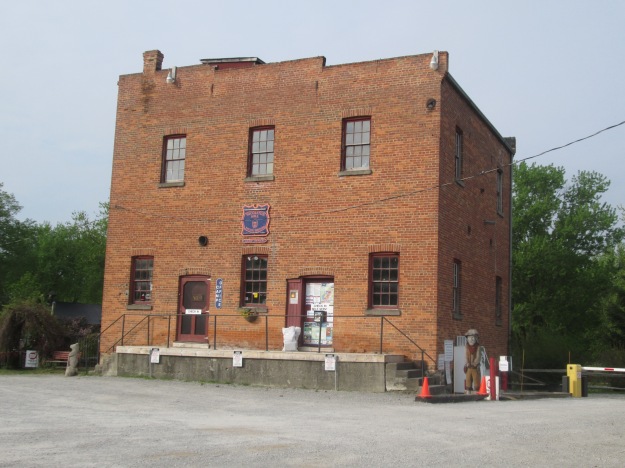 Some records indicate a government operated mill in Marchmont as early as 1834.  When the original mill burned in 1884 the town went without one for about three years.  A new mill was built in 1887 by Charles Powley who installed two runs of mill stones.  He used one for grinding flour and one for making livestock feed for the local farmers. In 1947 it was converted to a full time feed mill and the flour rollers were removed.  The mill records indicate 13 different people operated the mill until it closed for good in 1987. 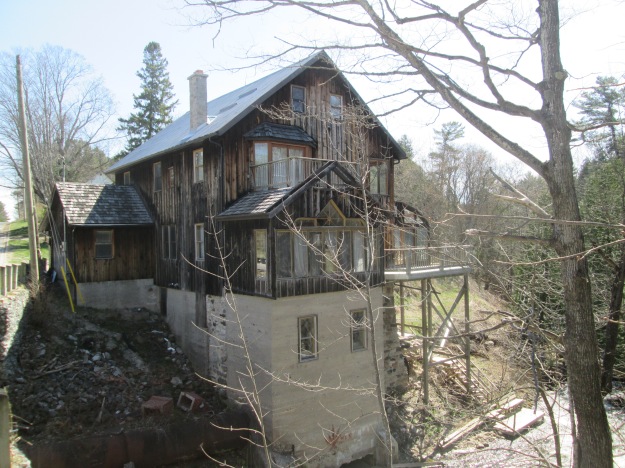 North of the GTA in the Meaford area the Georgian Bay Milling and Power Company built a power mill in Trout Hollow.  They supplied electricity to the town to light the streets and provide power to local industries.  The remains of the old power mill and the Trout Hollow dam can still be found along the river side. 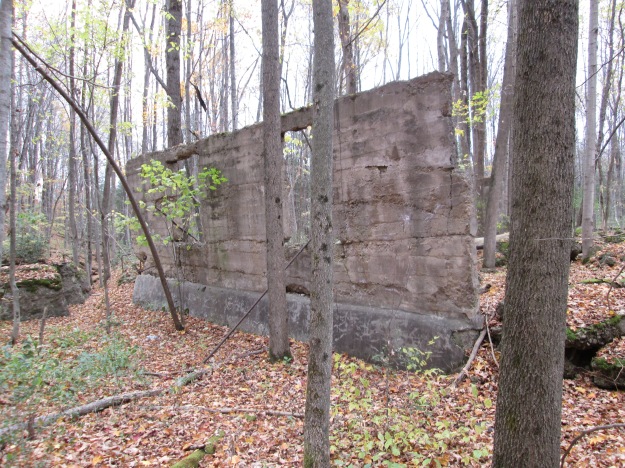 Some of the mills remain intact while others have been destroyed by fire and left to the elements.  There are others, like Millwood Mills on the Humber River, which are mere foundations that can best be located by tracing the outlines of the former raceways. 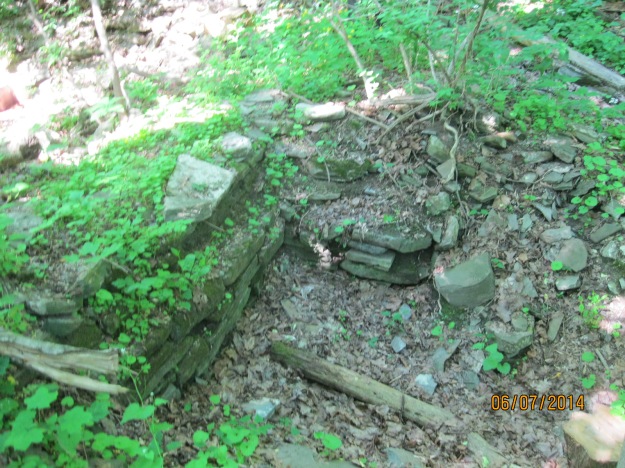 There are plenty of other mills in and around the GTA, some already explored and others awaiting their turn.