The original town of Ancaster in England is named from the Latin word “castra” which means camp.  It was the site of a military camp in the time of the Roman Empire.  The local town of Ancaster was named after it and was officially founded in 1793 making it one of the first communities in Upper Canada.  United Empire Loyalists had already begun to settle here by the time Lieutenant Governor John Grave Simcoe decided to build a series of roads for the military defense of the colony.  The town grew up around a flour mill that was located near a pair of waterfalls.  In and around Ancaster there are several other waterfalls that can be reached by a series of hiking trails.  Starting near the Ancaster mill we made our way toward Canterbury Creek and the two sets of falls that are located there.  Being -26 with a wind chill near -40 it was necessary to dress in layers to avoid being as frozen as the waterfalls we meant to explore.

Canterbury Creek is a tributary of Sulphur Creek. Lieutenant William Milne was a naval commander who lived between 1766 and 1844.  He entered the navy in 1799 as midshipman.  Milne had been in command of the HMS Carrier on Nov. 14, 1807 when it captured a french privateer ship for which he was later awarded a medal. He proved to have great valour in several campaigns and when he was shipwrecked and captured by the French in 1809 he was aquitted in a court-marshal because of the strong testimony of the French commander.  William bought the property that contains Canterbury Falls and sold it to his son in 1832.  It passed out of the family in 1845 and went through various owners until 1960 when the Anglican Church of Canada bought it for a summer camp retreat. Canterbury Falls are also known as Milne Falls and they are 9.5 metres tall and 3.3 metres wide at the crest.  They are known as a ribbon waterfall because they are much taller than they are wide.  They are also known as terraced because they have a step part way down. The picture below shows the frozen falls and the major terrace half way down.  The foot bridge at the top of the falls is on the Bruce Trail and was completed in 2008 by the Iroquoia Section who maintain the trail through this part of the escarpment. 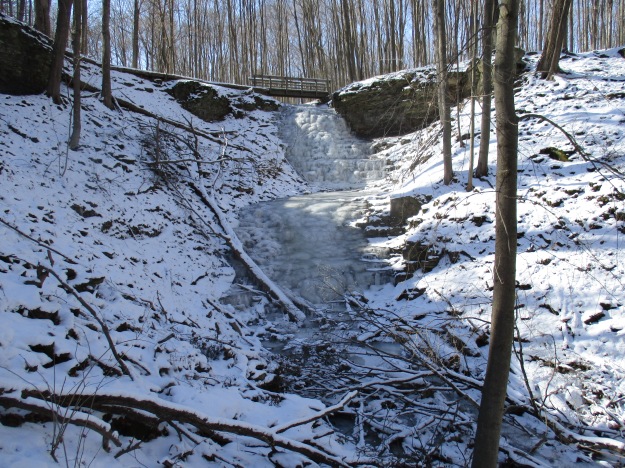 Just to the east of Canterbury Falls is another small falls known as Little Canterbury Falls. These falls do not have a strong water flow and dry up during the summer months.  They are best viewed during the spring when the usual melting snow swells the creek. 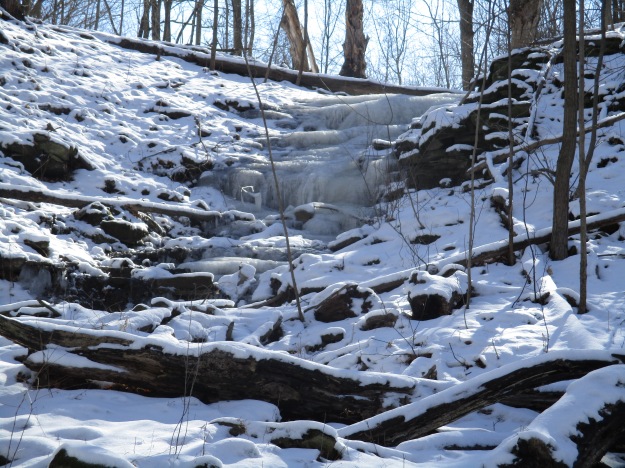 The sun was shining brightly and steam was rising in the freezing air near the old mill in Ancaster.

The first three mills that stood on this site were of wood construction and each was lost to fire in it’s turn.  This was a common fate of wooden mills because grinding flour is a dusty business.  When the harvest season was underway it was common to work late into the night with candles and lanterns providing the only light.  Open flames, lots of dust, dry wood and tired employees can be a recipe for disaster.  The current stone structure was erected in 1863 with the intention of making sure it would last.  The limestone for the building was quarried on site and the walls are four feet thick at the base.  After being restored, the mill opened as a restaurant in 1979.

The mill falls and raceway.

A set of turbines sits in Ancaster Creek beside the old Ancaster Mill reminding us of a time when water was the primary source for power for this industry.  Water would have been forced through the turbine after dropping from the mill pond above.  The turbine would spin, transferring power to a series of belts and drives that led to the mill stones.  These stones would then turn to grind grain into flour or to make livestock feed.

Old Dundas Road Falls is located on Old Dundas Road just outside of Ancaster.  It is on private property but the owners allow people to access the falls.  The falls are 24 metres tall and 10 metres wide making them a ribbon falls like those on Canterbury Creek.  These falls are also known as a complex cascade because of the way in which the water tumbles over a series of steps on the way over the falls.  These falls were being played at by a couple of kids who were trying to break the ice away from the face of the falls.  They can be seen at the base of the falls in the picture below. 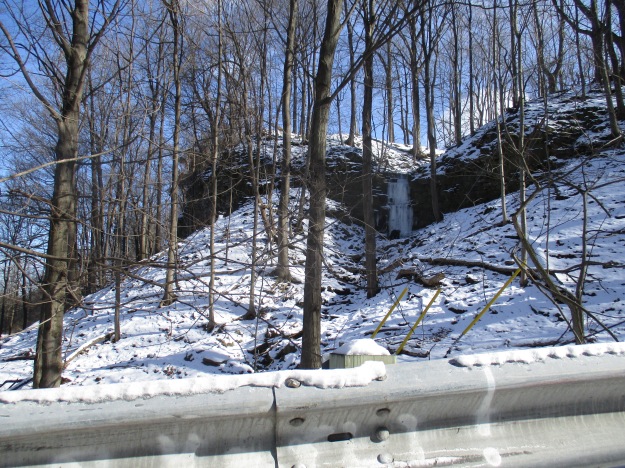 Once you pass the Old Dundas Road waterfalls the road continues to the bottom of the hill where there is a small amount of parking.  A trail leads from the road in to the final frozen waterfall of the day.  Sherman falls is located on Ancaster Creek and is 17 metres high and 8 wide.  It has also been known as Whitton Falls and Smith Falls.  Clifton and Frank Sheman founded Dominion Founderies and Steel Company (Dofasco) in 1912.  This steel company would help to bring an industry to Hamilton that was instrumental in the development of the city.  They lend their name to the falls.

The cover photo shows the falls from behind the ice curtain that hangs in front of it.  The hard dolostone of the upper layer has been undercut as the softer Rochester Shale has eroded away below it.  A second layer of dolostone forms the distinct ledge part way down the falls.  The same erosion of softer shale under harder dolostone creates the characteristic ledge on each of the falls featured in this location.  The cover photo was taken from under the ledge half way down this waterfall.

Ancaster has plenty of history left to be explored on another occasion.

4 thoughts on “Frozen Waterfalls of Ancaster”