The Lake Ontario shoreline is constantly changing due to the effects of erosion and this can be seen in full measure at the Cathedral Bluffs in Scarborough.  We previously looked briefly at the formation of the Scarborough Bluffs in Sand Castles with a post going west from Bluffer’s Park.  Today we go east from there toward the Cathedral Bluffs and will see the effects of erosion in several forms.

The cover photo above shows a small section of the bluffs where several homes sit above a horseshoe shaped section of the bluffs that has collapsed in several places.  Sloping sand piles, or talus, can be seen in half a dozen spots reaching nearly to the top of the bluffs. In some places homes at the top have been losing about 30 cm of their back yard per year and the Toronto Regional Conservation Authority has been implementing measures to reduce this and preserve the bluffs.  The section of sand pictured below provides home to a large number of bank swallows who live in a relatively narrow band dictated by the density of the sand in the section.  The bluffs provide home to many birds and butterflies as well as white tail deer and coyotes.  They also serve as a green migratory route for wildlife that is moving between the various ravines in the area. 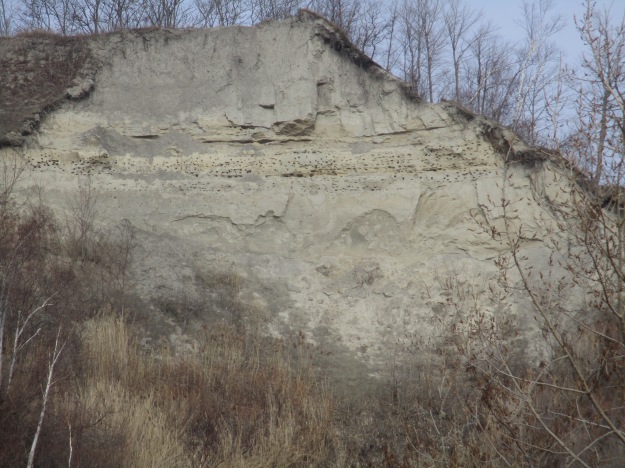 As you walk along the Bluffer’s Park Marina an interesting attempt to overcome erosion can be seen on the top of the bluffs.  Someone has built shoring for the edge of their property.  Normally if you want to shore up a structure you transfer the weight onto something solid.  That isn’t possible here because the sand is up to 96 metres deep. Although erosion has been slowed down through the implementation of shoreline controls it continues in spite of mankind’s best attempts to control nature.  This piece of property will eventually disappear and perhaps so will the next one north of it.

Several actions are being taken to help reduce the rate of erosion on the bluffs.  Gentle slopes are being developed rather than the vertical surfaces.  The picture below shows shrubs, reeds and grasses that are growing along the base of the cliffs.  The common reed grows in wetlands and is considered an invasive species but it is encouraged here because of it’s root system which is serving to hold the sand together and reduce the amount that gets washed away.  The fact that it’s yellowish stocks are growing half way up the side of the bluffs shows how much water is retained in the sand.

The bluff in the picture above looks quite different when viewed from the side.  Another strip of bird nest holes runs along the same layer of sediment in the bluff and can be seen at the front corner of the nearest point in the picture below.

Between the sections of bluff there are several ravines that have been cut through the sand.  Invariably there is a rivulet of water running in the bottom and it is always clouded with sand.  This swells when there is a rain storm.  On the right hand side of the picture below is an outcrop of sand which is being held together by the roots of the shrub growing on top. 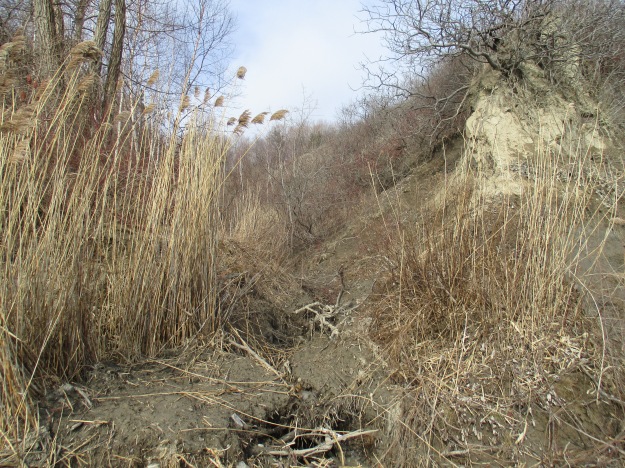 A shingle beach is one made up of stones ranging in size from 2 milimetres up to around 200.  Quite often they occur naturally and serve to protect the beach from the erosive effects of the waves in a process known as armoring.  When the stones are placed intentionally they are called riprap and often include pieces of concrete and brick from demolished buildings.  To control erosion much of Toronto and the surrounding areas have been given hard shorelines through riprap and concrete forms.  Along this beach there are stretches of riprap made up of rounded stones that have been deposited as a buffer between the waves and the reeds on the edge of the bluffs.

Among the stones on the beach is this concrete block which has been eroded down through abrasion.  The repeated effect of the smaller stones knocking against the sharp corners of the block has worn them off.  The waves only reach this far up the beach when there is a storm and the waves are at their most powerful.

Past the shingle beach is a stretch where the reeds have reached almost to the water’s edge.  A recent collapse of the side of a higher range of bluffs has closed the beach at this point.  The waves will carry this away as the lake continues it’s relentless assault on the shoreline.  The sandy beaches that line the shore of the lake west of the bluffs are made of material which has been deposited from here.  The predominating current of the lake is known as longshore drift and on the north side of Lake Ontario it is in an westerly direction.  Water entering the lake from Lake Erie through the Niagara River carries the lake water east along the southern shore toward the St. Lawrence River.  This creates a motion in the lake that carries sand from the bluffs to the west and deposits it to form a series of ten beaches.  These range from Bluffer’s Park beach in the east to Sunnyside and Marie Curtis in the west. Notice the white birch tree that is hanging over the edge of the bluff just beyond this mudslide in this photo.  It will find itself in the lake shortly.

Behind me the roots of one of the dogwoods rise out of the water.  It’s journey from cliff top to water front has been completed. 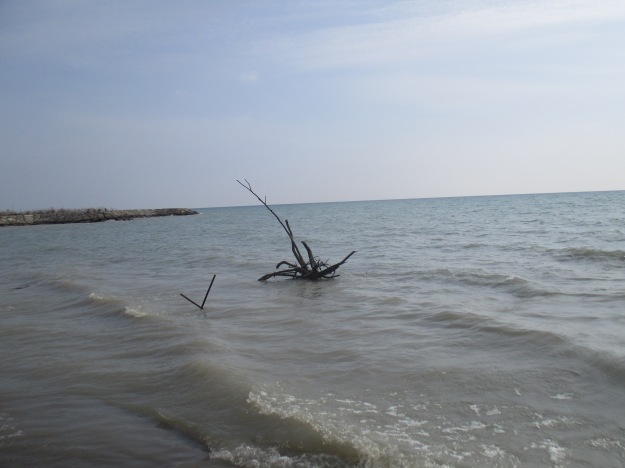 The picture below shows one of the places where the water in the bluffs is draining across the beach and carrying fresh sand from recent collapses into the lake.  The beach is protecting the bluffs from the action of the waves and gentle slopes reach up to the bluffs. In spite of this, the sand continues to relentlessly erode away.  A $6.5 million dollar investment east of here has been made in the interest of protecting homes that are falling over the edge of the cliff but one must wonder how effective it will be in the long run.

Looking toward Lake Ontario the lighter sands of the bluffs are carried into the waves. The lake will carry this sand until it deposits it along the Leslie Spit, now that the spit guards the Toronto Islands from the east.  The Toronto Islands were a peninsula guarding the harbour in 1793 when York was founded.

The Scarborough Bluffs extend east from here and include a ravine that was formerly known as the Grand Canyon of Scarborough, before it was partly filled in.  Perhaps we’ll get a chance to investigate there soon.