The Leslie Street Spit technically isn’t a spit at all because it isn’t natural.  The entire spit was created from landfill and dredging from the harbour in Toronto, starting in 1959 and continuing today.  When the St. Lawrence Seaway was completed in 1959 it was thought that Toronto would see a large increase in shipping and more harbour facilities would be required.  An outer harbour was to be created by building an east headland extending into Lake Ontario.  Construction continued but by 1973 it was obvious there would never be a need for more harbour space.  It was decided to use the spit to create a park named Tommy Thompson Park.  The park is only open on weekends and holidays because it is an active construction site with dump trucks passing in both directions.  Tommy Thompson will be remembered as Metropolitan Toronto’s first Commissioner of Parks.  He is responsible for removing the houses and turning Toronto Islands into a park.

The map below is taken from the Tommy Thompson Park Master Plan and shows the growth and structure of the spit.  Some filling was completed on the shore of the outer harbour in 1956-1958 before construction of the headland began in 1959.  The long thin outer harbour east headland was constructed in sections each year until 1975 when it reached it’s current length.  In 1973 and 1974 the land mass was greatly increased when the outer harbour and the Keating Channel were dredged.  From 1979 through 1985 an endikement was built on the lakeside of the spit to create three new controlled cells for dumping material dredged from the harbour.  Between 1956 and 1991 there were 4,366,469 truck loads of material dumped here to create the spit as it existed at that time.  The spit was built to protect the harbour and islands from deposits of sand that originate from the Scarborough Bluffs.

Much of the landfill came from demolished buildings as can be seen in the picture below. This shot is taken from the water’s edge looking at a cross section of the spit which is all old bricks and broken concrete.  The waves quickly break down the old concrete and bricks and create the gravel beaches that are seen in places along the lake side of the spit.  Along the 1965 and 1966 sections of the lake side beach there is extensive twisted metal rebar that has been left as the concrete eroded away.

One of the long term goals of the park project has been to create sustainable wildlife habitats.  Many of the species that are found here have been planted naturally.  Pets are banned from the park so that the plants and wild animals can survive without undue competition.  Two snake hibernaculums have been created on the spit for snakes to be able to survive the winter.  The picture below shows a stretch of old road bed which has been brought to the spit and dumped in a strategic manner to create relief, cover and an irregular outline.  Snakes and other wild life have moved in and begun to breed on the spit. There are, for instance, six species of snakes that have been identified in the park. The most common of these is the eastern garter snake while the eastern milk snake can often be seen as well.  The northern and midland brown snakes, the northern water snake and the northern red-bellied snake are much less common and spend very little time out in the open. 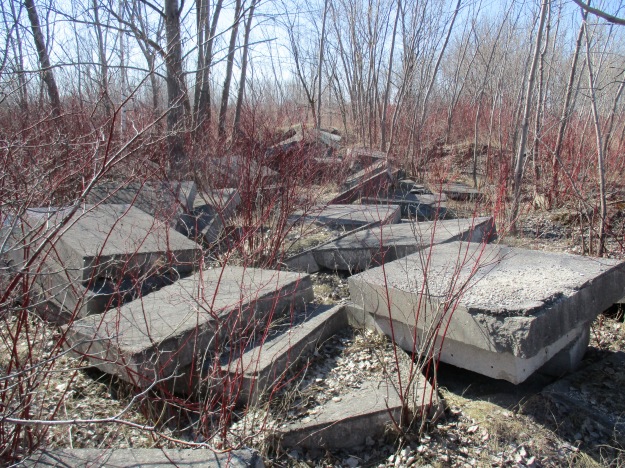 The park is one of the best places in the city to view birds.  There are reported sightings of 290 species of birds on the spit with 40 of them breeding here.  The Double Crested Cormorant first arrived in the park in 1990.  The Star reported in May 2009 that the colony had reached 30,000 birds and that they were stripping trees to build their nests.  As seen below the nests are made up of anything, including pieces of plastic bags.  The cover photo shows part of one of the nesting colonies and reveals hundreds of birds in just a few trees.  A careful look in the water in the foreground of the cover photo will reveal a pair of white swans.

Many of the trees on the spit have been damaged by beaver who are one of twenty-two mammals that call it home.  Volunteers have begun to wrap the base of surviving trees in the area of the ponds with wire mesh to keep the beavers from destroying them.  A beaver lodge, like the one below, is designed to make it almost impossible for predators to get in. The animals swim into their homes through an entrance below the water line.  Inside there are usually two chambers or dens.  In the first one they dry off while the second one is the living quarters.

Special habitats were created for fish and birds by bringing in stumps and posts and sinking them in ponds and marshes. 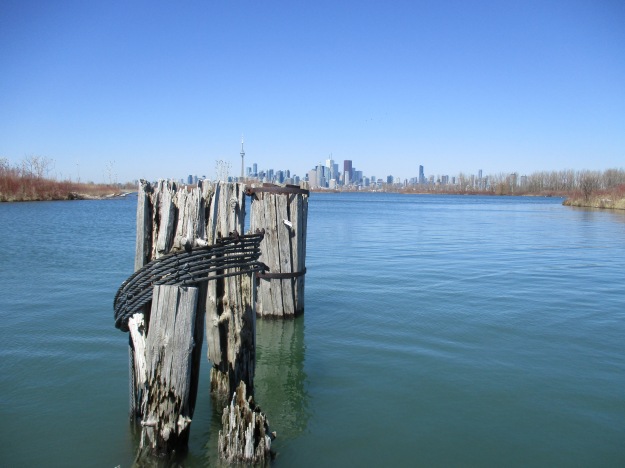 Along with the main paved trail, which is an extension of Leslie Street, the park features several kilometers of other trails like this one which winds through the horsetails and dogwoods. 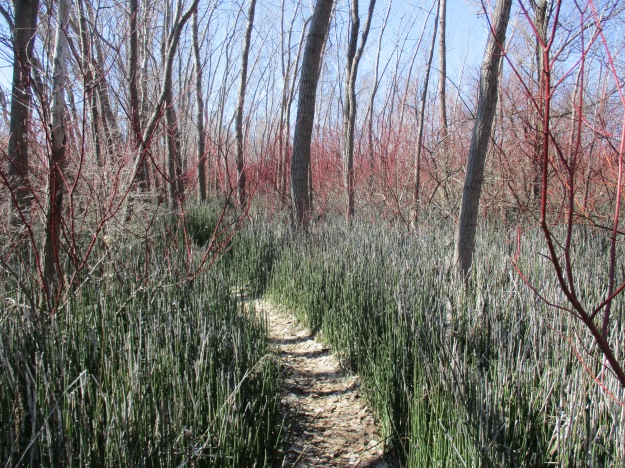 In 1977 Gijsbertus Adrianus Panhuise of the Netherlands was granted a patent on the first kitesurfing equipment.  Kitesurfing allows the participant to reach speeds of up to 55 knots (over 100 km/hr) and part of the thrill of the sport is in jumping.  The man in the picture below was racing between the spit and the Toronto Islands and leaping in the air.  He is in the middle of a 360 degree flip and his kite is just out of site above the picture. 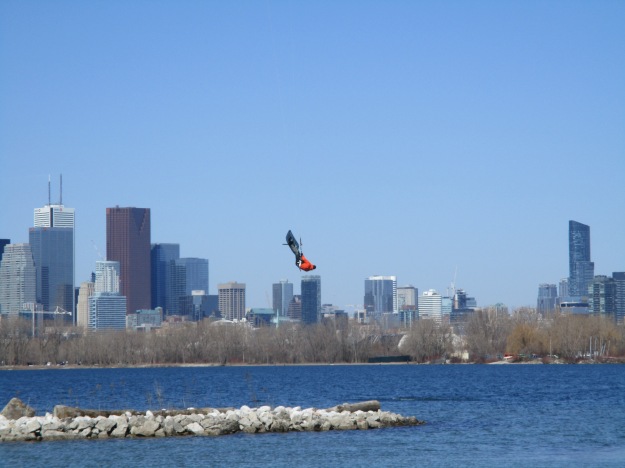 The point of the spit that reaches farthest into the lake is known as Vicki Keith Point. Vicki is a Canadian athlete who used her swimming skills to raise over $800,000 for children’s charities.  In the summer of 1988 she swam all 5 Great Lakes.  During her career she swam the 52 kilometers across Lake Ontario 5 times.  The tip of the spit was her usual point of departure or arrival.  This lighthouse stands on Vicki Keith Point. 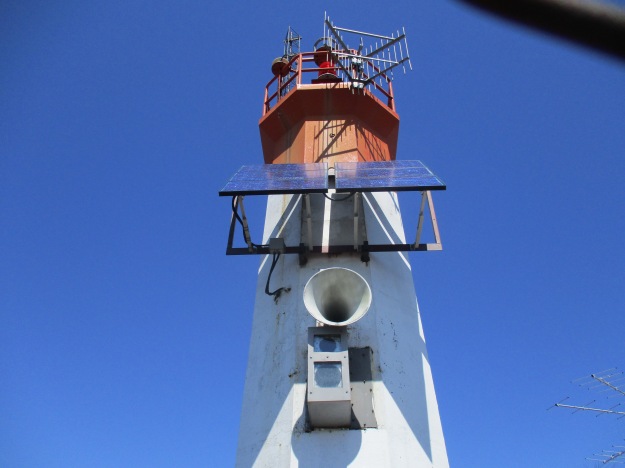 One of the bricks that is laying on the beach near the lighthouse has the letters TPB on it. This stands for Toronto Pressed Brick and it was manufactured at the Don Valley Brick Works between 1882 and 1909. 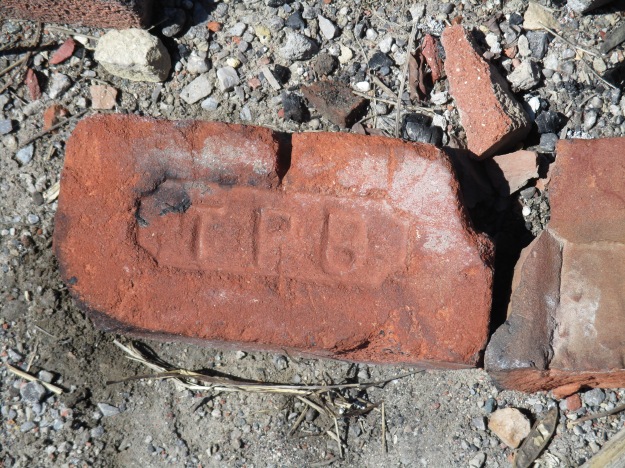 The view from the Leslie Street Spit looking back toward Toronto makes it appear that the city has a shoreline which is covered with trees.  These trees are actually on the Toronto Islands. 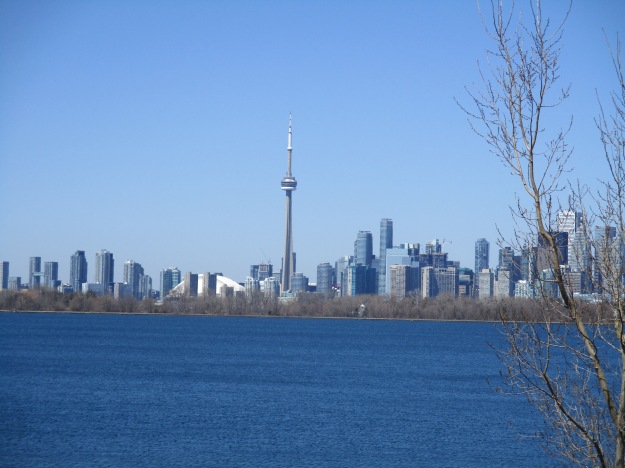 The Spit has an enormous amount of flora and fauna that has settled there since the artificial strip of land was created.  Checklists are available for all types of enthusiasts on the Tommy Thompson Park website including an inclusive list of birds that have been identified here.