Borer’s Falls is where Borer’s Creek plunges over the side of the Niagara Escarpment but the creek also boasts a lower falls that is one third as high as well as two extensive sets of cascade falls.  The main water falls is also sometimes known as Rock Chapel Falls.

The Borer’s Rock Chapel heritage lands are one of 6 sets of lands in the “Cootes to Escarpment” Park System.  This set of properties represent the only wild life corridor between the Niagara Escarpment and Lake Ontario that isn’t cut by a 400 series highway which restricts land migration of animals.  These properties have been registered as having 1852 species of flora and fauna and are also known as Environmentally Sensitive Areas because surveys have identified over 50 species that are at risk, threatened or of special concern.  The view below looks across the valley toward Hamilton with the heritage lands in the foreground.  The Royal Botanical Gardens and Cootes Paradise are along the shore of Hamilton Bay.

The park system also includes a 10 kilometer section of the escarpment which includes a property to the east of Borer’s Creek called the Berry Tract after the land owner.  Between the Rock Chapel Trail and the Bruce Trail near the cliff face is an unused field which is returning to a forested condition.  The undergrowth is a massive tangle of raspberry vines as can be seen below. In a few months this section of woods could be renamed the berry tract. 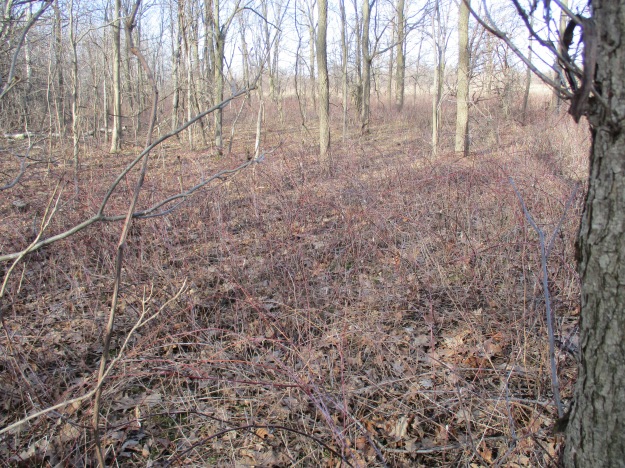 There are two lookout points as you hike along the Bruce Trail heading away from Borer’s Creek and the falls.  Part way down the side of the ravine an old trail makes it’s way to the bottom as it leads back toward the creek.

The Borer’s creek gorge has been cut through the escarpment by rushing water as the ice retreated about 12,000 years ago.  The ravine has steep sides but also makes a steep descent down the side of the escarpment.  This causes the creek to have a series of cascade waterfalls that stretches all the way from the ravine floor back up to the base of Borer’s Falls. 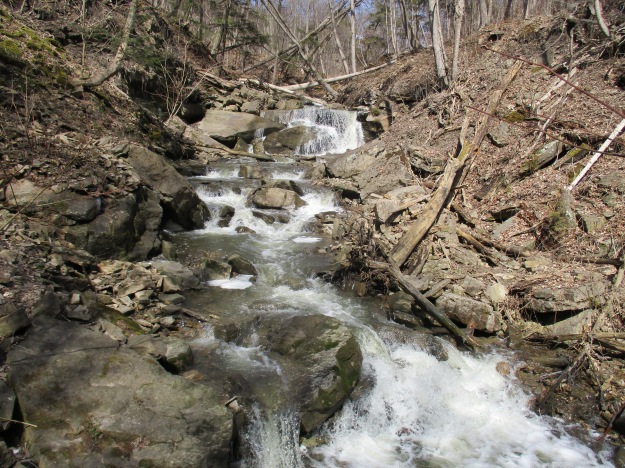 Lower Borer’s Falls is not visible from any of the look out points but is well worth the excursion to reach it.  When the creek is in full flow there is a 5 meter wide curtain waterfall here that is 3 meters tall.  Adjacent to the waterfall is an exposed section of red Queenston Shale. This is the bedrock of the Niagara Escarpment and it sits just below the harder Whirlpool Formation.  At the lower falls the softer Queenston Shale is eroded away leaving the Whirlpool Formation overhanging.  The layer of lighter Queenston Shale at the top of this formation is due to an oxidation process when the escarpment was beginning to form.

Life is tenacious and the pine tree on the side of the ravine in the picture below has fully enveloped the large rock in it’s root system.  When the tree eventually falls it will pull this rock down into Borer’s Creek.  The Niagara Escarpment Ancient Tree Atlas Project began in 1998 to survey the ravines and cliff faces of the escarpment to identify trees that had survived the clear-cutting practices of the early lumber industry.  Cedar trees were recorded in the Borer’s Creek ravine that were 400 years old.  Unlike this tree, they tend to be small in spite of their age.  The creek is named after the Borer family who operated the local saw mill for a century.  The small size of these ancient cedars likely kept them from being fed through this mill which supported the community of Rock Chapel.

Above the lower falls the creek has another extensive section of cascade falls. Throughout here the creek bed is littered with broken chunks of dolomite stone. 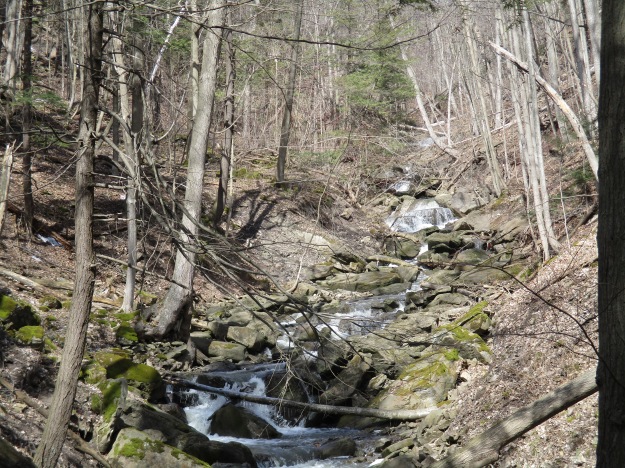 Borer’s Falls turned out to be a big disappointment as can be seen in the picture below. Just kidding, but there is a small water fall near Rock Chapel Road that looks like it is usually dry but might contain a significant flow during storms.

The view as you approach Borer’s Falls includes a cross section of the layers that form the escarpment.  These are described in greater detail in the story on The Devil’s Punch Bowl. Ascending the cliff face at the falls is impossible because of the alternating layers of hard dolostone and softer shale which have been under cut.  The cliff face is stepped outward as it goes upward.  This waterfall is classified as a ribbon plunge because of the width of 5 meters compared to the height of 15 meters and the deep plunge pool at the bottom. 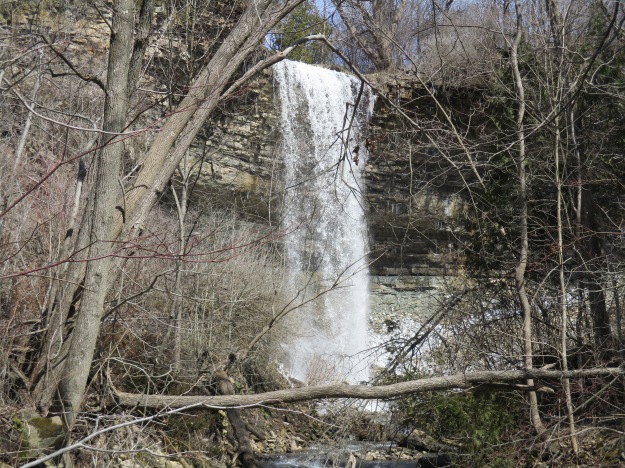 This picture is looking down into the plunge pool of Borer’s Falls and it’s cold enough this morning that the mist from the falls has frosted the lower formations of the escarpment and the talus around the bottom.  Be careful if you choose to climb on the talus as it is made of loose rock that has fallen from the cliff face.  It can shift suddenly, contains hidden holes and may be slippery with moss. From this point your only option is to turn back.  There is a spot just beside the falls where it may be possible to climb when the rock face is dry.  A solid rope tied at the top at this point would make for easy access to the base of the falls and back up to the road.

After retracing the route back to the Rock Chapel Road the trail rejoins the Bruce Trail. The bridge over Borer’s Creek provides a nice view of the crest of the falls.  You can also get right to the edge of the falls where you can look down the 15 meters to the creek flowing into the distance.

The bridge contains a date stone from 1868.  The shape of this stone marks it as a keystone which would have been used to lock the apex of an arch.  An arch cannot be self supporting until the keystone is added as it applies force to lock all the other stones in place. 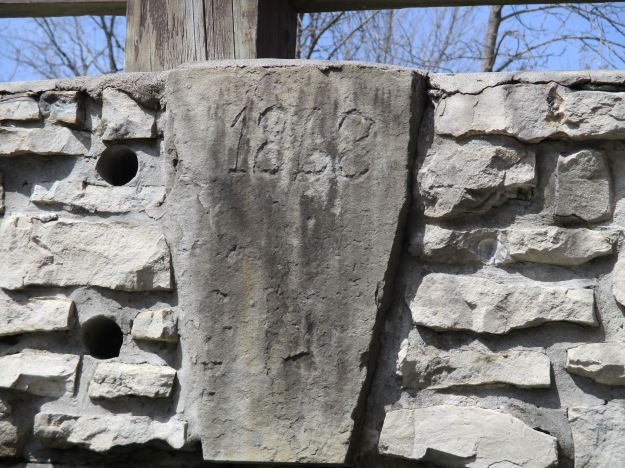 This is the most common view of the falls and often adorns old post cards.  This photo is taken from the viewing platform near the falls.

Borer’s Falls was a really enjoyable hike through the ravine and along the creek.  Also in the same area are Websters and Tews Falls as well as the Great Falls in Smokey Hollow.