This is a second part to the post Silverthorne Grist Mill – Meadowvale.

In 1805 the “old survey” was completed in which the native people sold their lands except for 1 mile on either side of the Credit river.  When the “new survey” was completed in 1818 the river was ceded as well and this opened the area up to settlers who wanted access to the river to build saw or grist mills.  John Beatty arrived in 1819 and was the first settler in the area.  Huge pine trees lined the hill sides but a grassy meadow lay around the river.  From this came the name of the town, Meadowvale.  From 1819 until the mid-20th century the town changed very little.  It remained centred around a triangle of streets wedged between Derry Road, Second Line and the Credit River.  As the city of Mississauga started to grow wildly in the 1970’s the people of Meadowvale started to worry that their small town would lose it’s historical charm. They applied to have the town formally recognized as Ontario’s first Cultural Heritage District.

The following is a look at some of the heritage buildings in the village of Meadowvale.  Others have been featured in the post Silverthorne Grist Mill.

Known as the “Hill House” this little home was built in 1840 and is one of the oldest homes in the village.  It has always remained a private residence belonging to the Hill family after 1896. The early Methodist church meetings were held in this house until the church was built in 1863. 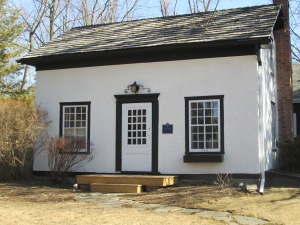 George Bell (no relation to the famous Blue Jay) was the town blacksmith and in 1844 he purchased land from mill owner John Simpson on which to build the first hotel in Meadowvale.   Bell Hotel was built across the street from the grist mill at 1090 Old Derry Road.  For awhile it was also known as Temperance Hotel.  The building is currently in use as residential apartments. 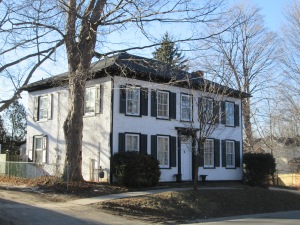 In 1852 the Brick Hotel was constructed at 1051 Old Derry Road by Matthew Laidlaw.  The stacked open veranda was on the original building but was removed before 1900.  Guests would sit out here to enjoy the evening and get coated with dust from the street in front of the hotel.  The veranda was replaced in recent years. 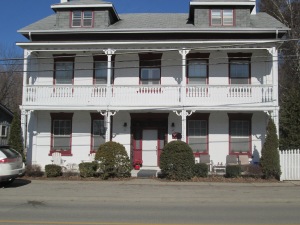 In 1857 Meadowvale got it’s first post master in the person of Luther Cheyne.  The post office was operated out of Silverthorne’s store.  In 1860 Cheyne built a home at 7053 Pond Street that was sold to the Farnells in 1890.  In 1920 it was bought by two ladies who opened the Apple Tree Inn tea room in the house.  When this closed in 1944 the house again became a private residence. 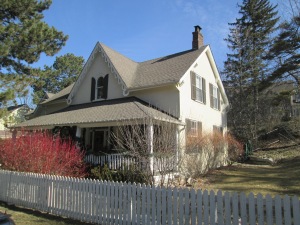 Weslyan Methodist was the primary denomination in much of early Upper Canada.  The 1863 church on the corner of Derry and Second line has had a front porch, or narthex, added to it over the years.  There is a trim of yellow bricks around the top of the older part of the building that can be glimpsed behind the tree on the right hand side.  In 1925 the Methodist church joined 3 other denominations to form the United Church of Canada.  Today it serves the United Church in town. 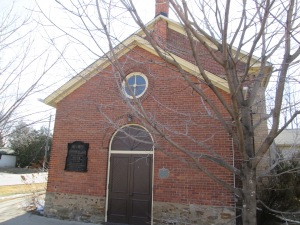 The 1870’s were a period of prosperity for Meadowvale while the mills were under the ownership of Gooderham and Worts.  This photo shows the Gooderham Estate as it looked around 1900.  The current house is featured in the Silverthorne mill post. 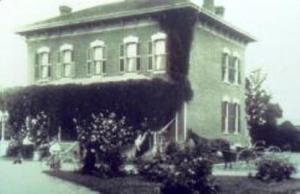 Around 1870 Johnson’s wagon and blacksmith shops were built at 1101 Willow Lane close to the grist mill.  The original 1870 house still stands on the property as well as a grand old fashioned mansion that was built in 1999 in a style that fits the character of the village.  The wagon shop is featured in the cover photo and the blacksmith shop is below.  Notice the two windows in the second floor of the wagon shop.  Painted parts would be left upstairs to dry. 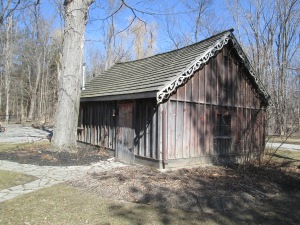 In 1870 the Graham house was built next to the Methodist Church on land donated by John Simpson for a home for his daughter Elizabeth and her husband.  This is one of the more ornate homes in town. 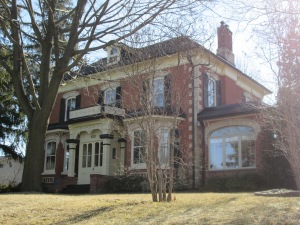 In 1871 a second school was built to replace the old one that stood at the corner of Barberry Lane and Second Line.  The first one had been built in 1851 and was used as a private residence after the new school was built.  Barberry Lane was originally named second street but was renamed after the Barbers who lived in the old school house.  The old school house was lost to a fire in 1974.  The new school was built just behind the Methodist church on land donated by the Simpson Family. It has served as the town hall since 1968. 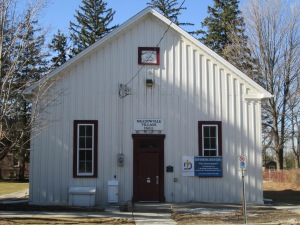 In 1879 the Credit Valley Railroad came to Meadowvale.  The chief financial backer was George Laidlaw who was responsible for much of the rail system in and around Toronto.  The picture below shows the CVR station for Meadowvale around 1905. 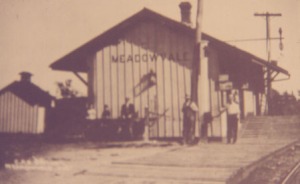 The homes in the village were mostly built prior to the time of running water.  They would have had an outhouse for a washroom and a hand pump for their well.  Many of the homes in town still have their old pumps on the front lawn.  (Fortunately it looks like they all have indoor washrooms now making that cold winter trip a part of history as well.) 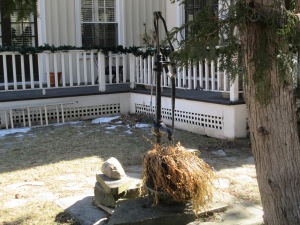 Along Second Line stands this old post.  A reminder of the days when mail service was made to individual post boxes set at the end of a person’s driveway. 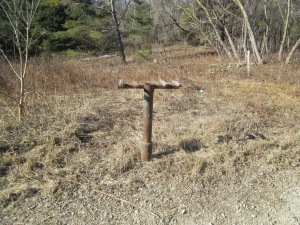 Today people must go the a “super box” gazebo to collect their mail.  The mail gazebo is located on top of the ruins of the old mill. The old mixed with the new.  In the picture below the old mill ruins can be seen in the background behind the gazebo. 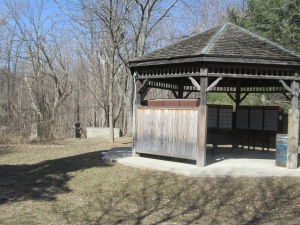 Meadowvale is full of heritage houses only a few of which have been featured here.  It is a quiet community of narrow streets with no curbs or sidewalks.  A time capsule tucked in the heart of the city of Mississauga.