Over the past year I have posted over 700 photos taken in various parks around the Greater Toronto Area (GTA).  Hiking through diverse parts of the city one thing is common, there is very little litter in the parks.  This is not the case for the park on the south east corner of Finch Avenue and Dufferin Street.  I don’t know if it has a formal name, I have seen Dufferin Park on some maps, but I feel it should be renamed Garbage Park.  Have a look at the pictures below and see how sick you feel.  Then re-post this where the most people will see it until we get the attention of the city. 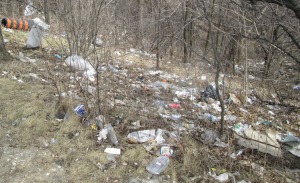 Walking down Dufferin along the side of the ravine on my lunch I was disgusted at the amount of garbage.  I know from working in the area that the city never cleans this woodlot.  The garbage runs the entire length of this park along both Finch and Dufferin streets.  This is the view from the street into the ravine.

There is an environmental disaster rotting on the hillside and leaching into Dufferin Creek and then the Don River. 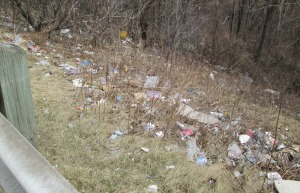 Toronto has a beautiful park system in our ravines.  This should also be a part of that network of wildlife habitats.

Toronto is busy cleaning up for the 2015 Pan Am games why not invest a bit somewhere other than the downtown core?  That isn’t snow in the woods, it hasn’t melted all the years it’s lain there. 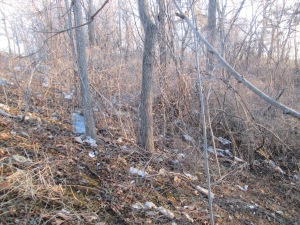 If you think the city’s neglect of Garbage Park needs to end please post this where people will see it.  Spread it around Facebook.  Email it to your city councilor.  The more people requesting action the better.  I would love to come back here and show pictures of the cleaned up park. There is a history here and the foundations of at least four former homes.  There’s a better story waiting to be told.

For hundreds of pictures of beautiful parks in the Greater Toronto Area please go to: