Winter has a way of hanging on and at 3 degrees we were being subjected to small pellets of ice as we started out.  Eldorado Park is the next stop northward on the Credit River following the visit to Churchville last week.

Eldorado park sits on lots 2 and 3 in the 4th concession west in Chingoucousy Township in what is now the city of Brampton.  Lot 2 was settled by Jacob Snure who built a grist mill which he called Eldorado Mills.  For lot 3, Mary Anne Forest is shown as a saw mill owner, likely after the loss of her husband.  The area has had several owners since this time.  In the 1877 historical Atlas the property is shown as belonging to Kenneth Chisholme.  The mills closed and by the early 1900’s the area was converted to a large private park known as Eldorado Park.  In 1925 the Canadian National Railway (CNR) purchased the property to try to breathe some life into the struggling suburban railway it had absorbed in 1918.  They added a Ferris Wheel and Merry-Go-Round attempting to create the ideal day trip.

We parked in the Eldorado Park parking lot and crossed the bridge to the west side of the Credit River.  Just downstream from here is Brampton’s only outdoor swimming pool.  When the Toronto Suburban Railway was completed to Guelph in 1917 it passed through Meadowvale and Churchville before reaching Georgetown.  It passed through Eldorado Park which gave the railway the idea of creating it’s own tourist attraction to which it would provide transportation. The old right of way for the train tracks ran just along the edge of the swimming pool (long closed when the pool was built) and can be followed south from there.  The picture below shows the old rail bed which, since the removal of the rails for use in Europe during WWII, looks much like any other hiking trail.  The cover photo shows one of the streetcar-like trains unloading passengers at Eldorado Park.

Along the old rail corridor we decided to follow a small ravine to investigate an older building. Before we reached it we came across an old soda bottle.  Polar Beverages was founded in 1882 in Worcester Massachusetts.  Now in it’s fourth generation, this family owned beverage company is the largest independent bottler in the USA.  Polar Beverages got themselves sued in 1994 by showing a polar bear throwing a Coke in a garbage bin marked “Keep the Arctic pure”. The bottle in the picture below is dated 1948 and was made in Salem Mass.

During the Depression the CPR determined that rail line and ultimately the park were too expensive to maintain, closing them in 1931 and 1936 respectively.  The park area was purchased by a Jewish group for a summer camp called Camp Naivelt (New World).  For the first few years campers used tents but during the 1940’s and 50’s about 90 small cottages were built in what would be known as Hill 1, 2 and 3.  We had wondered into Hill 3 and found The Ritz and a small building holding a water tank.  Beside them stand two abandoned buildings that were the children’s infirmary.  The roofs are caving in and these will likely be pulled down before long.  The no trespassing sign on the building applies to the whole property and the owners ask that you take this article in the spirit of preserving history and that we do our part by not entering the property. 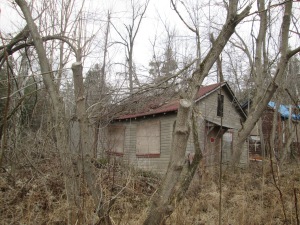 The cottages along Hill 3 are at the western edge of the property and face the old infirmary.   In the 1960’s attendance at the camp declined and 52 acres were sold off to the township.  These form the public area of today’s Eldorado Park and have helped keep Camp Naivelt from being swallowed by urbanization.  The camp is now proposed for a Cultural Heritage Designation for it’s contributions to local culture.  Folk activist Pete Seeger hung around here regularily giving impromptu concerts.  He is remembered for writing songs such as “Turn, Turn, Turn”, “Where Have All The Flowers Gone” and “If I Had A Hammer”

Returning to the old electric rail line we followed it along the river until we came to the place where the bridge is out, 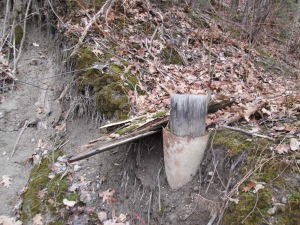 Beyond here the hillside is oozing mud and quickly becomes impassible.  The old rail line ran across the side of this embankment but much of the remains now lie in the bottom of the ravine under the muddy water.  Parts of rail ties may be strewn along the hillside.

We returned to the bridge and crossed back to the east side of the Credit and started to follow it south.  After awhile we started to find concrete scattered on both sides of the river.  After passing a foundation for some former building we started to follow a concrete wall running somewhat parallel to the river and just inside an older earthen berm.  Broken in several places it no longer holds the mill pond from Eldorado Mills.  The view below is from inside the former pond looking out through the sluice gate. 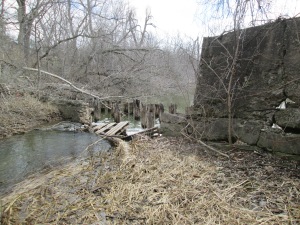 The disipator at the outflow of the sluice is rotting away.  Even so, the effect can be clearly seen in the picture below as it causes the water to lose kinetic energy.  The water is churning white after dropping over a small waterfall.  As it passes each row of posts it becomes noticeably calmer.  By the time it passes the fifth row it is almost totally smooth.

When we came to cross the tail race on our trip south we found that the only way was use the fallen tree just before the river.  Someone had neglected to nail a hand rail on there for us like had been done at Playter’s Bridge on the Don River.

Built in the 1930’s the Creditview Bowstring bridge is one of only two bowstring truss bridges in Brampton and the only one still part of a public roadway.  Along with the bridge in Churchville it is also one of only two one-lane public bridges in Brampton.  It had fallen into disrepair and by 2002 it faced closure.  When it was given an heritage designation in 2003 it got a $700,000 makeover.

Eldorado Park hosts families on picnics and dogs chasing balls these days but the history of a milling centre and an amusement park remains in the old right of way for the electric railway and the remnants of the mill pond and sluice gates.