When York (Toronto) was founded in 1793 the Don River was home to a wide variety of wildlife. The lower Don snaked it’s way through the Ashbridges Bay Marsh before reaching the lake. At night the marshes were alight with small boats spear fishing large salmon. After a snowfall in the winter the frozen river revealed countless tracks from many different species. This past winter’s pictures show that this is no longer the case.  The cover photo shows the marshes in 1909 before they started to fill them in.  This portion of the river flows slowly because it has a very gradual slope at only 4 meters for every km it flows.  Milling operations, industry and sewage caused the river to become horribly polluted by the mid 1800’s.  By 1890 the Don Improvement Plan had been implemented to straighten the portion of the Don river below Riverdale Farm.  This channelized portion of the river would become known as The Don Narrows.  What a change from yesterday.  At 2 degrees, I didn’t end up carrying my jacket today.  I started off at Riverdale Park where I used the pedestrian bridge to get access to the Lower Don Trail.

The first bridge across the Don river was a fallen tree with a hand rail attached which was known as Playter’s Bridge.  The drawing below was made by Elizabeth Simcoe, wife the Lieutenant Governor, in 1794.  It ran where Winchester Street  bridge used to stand.  This was the starting point for my hike down the Don River.

The final curve in the river, before the narrows, runs under the former Canadian Pacific Railway bridge.  This abandoned bridge carried the Toronto to Montreal train out across the Half Mile Bridge.

Just south of here is a pedestrian bridge that carries the Lower Don Trail over the river.  The picture above was taken from this vantage point.  The third bridge is the high green steel pedestrian bridge that backs onto Riverdale Park and Farm built in 1959.  At the base of this bridge is the abandoned abutments from a bailey bridge that stood here previously.  Princess Margaret visited Toronto on July 31, 1958.  She was introduced to the city from this former bridge, of which the concrete abutments stand on either side of the river.

The bridge at Queen Street replaces a couple of previous bridges.  The first one from 1803 was designed by William Berczy, father of the post master in Toronto’s First Post Office and was a wooden draw bridge.  Today’s bridge was built in 1911and contains the phrase “This River I Step In Is not The River I Stand In” above a clock.  This phrase is taken from the Greek philosopher Heraclitus who is known for his doctrine of constant change.  It was only added in 1996 and the clock has been broken since 2010. 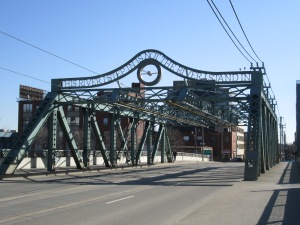 The Consumer’s Gas Bridge (now Enbridge) carries a 30″ gas main across the river.  It was constructed in 1930 for this purpose and has never actually been used for either pedestrian or vehicular traffic.  Consumer’s Gas used to operate three coal gas manufacturing plants in the city.  Customers who are supplied from the Eastern Avenue facility have their gas carried across the river on this bridge.  At the time that it was constructed the former wooden bridge for Eastern Avenue was incapable of carrying the weight.  There is a current push to have the sides opened up so that it won’t become a dam during a flood, causing a Raymore Drive kind of disaster.

The double span truss bridge that stands beside the Consumer’s Gas bridge replaces an earlier bridge that was damaged by ice flows in 1933.  This was the former bridge for Eastern Avenue before the opening of the DVP in 1964 and realignment of Eastern Avenue. 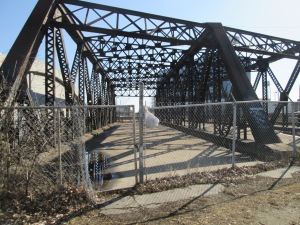 The first rail crossing on the lower Don was built in 1856 as part of the Grand Trunk Railway’s Toronto to Montreal line.  In 1892 a new bridge was built on the existing abutments.  In 1930 the present bridge was built on higher abutments just to the south of the previous one.  The cut stone abutments from 1856 can be seen on the eastern river bank in the picture below.  When the river was widened in 2007 for flood control purposes the west bank abutments were pulled up and used for erosion control and distributed as casual seating.  Cedar pilings that lined the river bank following the 1890 straightening of the river can be seen in the water on the near shore line. 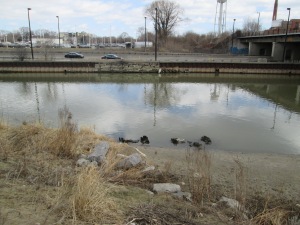 The last abandoned bridge before the harbour belonged to the British American Oil Company and was used to transport pipes across the river.  It appears to have been closed when the DVP was completed in the 1960’s.

The river makes a 90 degree turn after it passes under Lakeshore Drive as it enters Keating Channel on it’s way to the lake.  The picture below is looking back toward the curve in the river with the road on the left.  The British American Oil Company who owned the lands on either side of the river refused to allow access for the river to curve to meet the Keating Channel and so the right angled connection.

Along the Keating Channel, just before Cherry Street, I watched this Canada Goose jumping into the river.

The only bridge to cross the Keating Channel is the Cherry Street bascule bridge.  Built in 1968 it replaces an earlier swing bridge.  With plans to re-naturalize the mouth of the Don river a new channel will be created south of the Keating channel.  The Keating Channel will be retained for it’s historic value but this bridge is already scheduled to be replaced.  Note the operator’s control booth elevated above the bridge on the far end. 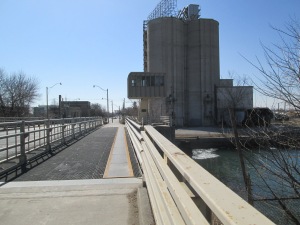 The mouth of the Don where it empties into the harbour as seen from the control room on the Cherry street bridge. 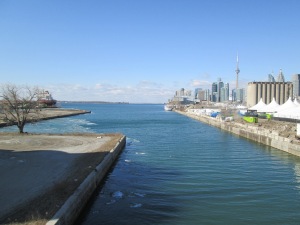 There is a plan to move the mouth of the Don river once again.  The present discussion involves taking the river a little farther south and then running a more natural channel west to the lake. The areas around the new channel would be planted with trees and made into parkland.  This strip of park would revitalize the Port Lands and reclaim a brown spot on the lake shore near downtown.  The picture below shows one of several proposals for the naturalization of the mouth of the Don River.

12 thoughts on “The Don Narrows”