Located at the foot of Bayview Avenue, Corktown Common is an 18 acre park that sits on reclaimed industrial lands.  These former brownfields were once home to the William Davis hog abattoir which later became Canada Packers.  The large number of pigs that passed through this downtown facility were partially responsible for the nickname “Hogtown” that Toronto took on.  By the 1990’s all the buildings on the site had been demolished.  Corktown Common was built in 2013 as part of the West Don Lands developments.  In order to protect the new Canary District developments from flooding from the Don River a large berm was built to retain a the river during a 1-in-100-year flooding event.  When you enter the Commons off of Front Street it brings you into the large central lawn. 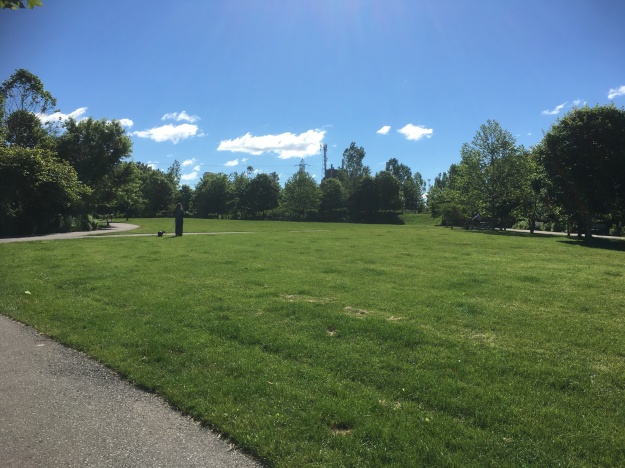 Native plants have been cultivated in groupings to create as many habitat features as possible to attract wildlife to the park.  A pair of painted turtles can be seen in the cover photo.  They live in one of the wetland ponds.

Nearly all of the water used on the site in splash pads, irrigation and storm water collection systems is fed into the urban marsh.  There is an irrigation cistern that can hold 150,000 gallons of water.  This is enough to irrigate the park for a week.

This baby mallard duck was feeding in one of the wetland ponds.  It has a life expectancy of 5-10 years in the wild but should have no lack of food if it remains in the wetlands.

Trails wind through the park as they make their way up the hill towards a large playground for children.  There is a splash pad as well as a fire pit and permanent bbq pits.

A pair of northern rough-winged swallows sit on the same branch in a tree where they were trying hard to keep their balance against a steady wind that was blowing in from the lake.

From the top of the hill in the Commons you can see the Lower Don River with several of the abandoned bridges including these ones from the old alignment of Eastern Avenue.

Corktown Commons has already become home to many species of birds and this Yellow Warbler was busy enjoying a worm for lunch.  The trails in the Commons also connect to the Lower Don Trail via the Bala underpass beneath the railway tracks.  This allows you to extend your walk in either direction up or down the river. 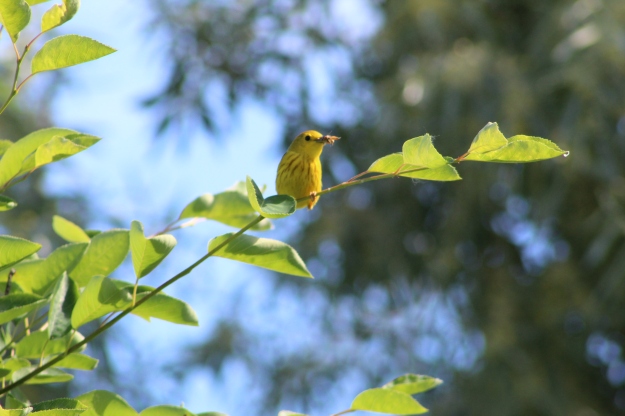 I decided to follow Cherry Street into the Port Lands to see what is happening with the work on refurbishing this 290 hectare former industrial site.  The Port Authority is conducting some large scale lake filling operations to create some new park land at the future mouth of the Don River.

Work has begun on digging a new channel for the Don River.  Over 120 years ago the river wound through the marshes that formed Ashbridges Bay and entered the lake through a course that is about to be restored.  The new river bed will be up to 100 metres wide and 1 kilometre long.

After crossing the Cherry Street bridge you can see the Cherry Street Interlocking Tower.  It is one of three towers that were built as part of the Union Station line in 1931.  Together they controlled the track switching that keeps trains from crashing in the busy rail corridor where over 235 trains pass each weekday.

Once you pass the Cherry Street tower you come to the entrance to the famous Distillery District.  This is an area that will need to be investigated sometime.