It was a beautiful day, sunny and 19 degrees by the edge of Lake Ontario. I parked at Cherry Beach with the idea of walking the beach east to Leslie Street where I could get around the shipping channel and back along Commissioners Street.

The Port Lands are an entirely artificial construction, tacked onto the end of an artificially straightened Don River.  Formerly marsh land at the mouth of the Don River, it was home to abundant wild life.  Gooderham and Worts used the marsh to dispose of animal waste and wheat swill from their distillery.  Soap factories and other heavy industry upstream as well as raw sewage worked together to create Canada’s most polluted river.  By the 1890’s the marsh had become so foul that there was constant fear of cholera outbreaks.  The Don River was straightened from just below Riverdale Farm, but silt continued to be a problem that required annual dredging of both the river and the harbour.  In 1912 the Waterfront Plan was implemented and the city began a program of filling in the Ashbridges Bay Marsh.  The cover photo shows the dredging operation that helped create what became the port lands.

There are some nice spots along the beach in spite of the fact that it is made of rubble and fill. In many places bricks and parts of demolished buildings litter the sand on the shore. Considering that there is a large concrete recycling facility along the Leslie Slip, just past the turning basin, I think cleaning this up must be too simple to occur to a politician.

Although the city attempted to crowd the marsh out it has been re-established in places. New wetlands exist that provide habitat for birds and butterflies.  I notice that the robins and red-winged blackbirds are looking fat and are getting ready to lay their eggs.  The picture below was taken looking back toward the city across a field of Typha (cattails) and European Common Reeds.

As you walk east along the beach the massive tower of the Richard L Hearn generating station remains a focal point along the way.  It stands on the south side of the ship channel beside the newer Port Lands Energy Centre.  Commissioned in 1951 as a coal fired generating station it was in service for only 32 years before being decommissioned in 1983.  At it’s peak in the 1960’s it was burning 400 tonnes of coal per hour which could be offloaded from ships right beside the generator.  The smoke stack was built in 1971 to replace the eight shorter ones that were considered to be polluting downtown. At 215 meters it was one of the tallest in the world at the time.  This is one of three old smoke stacks on the waterfront, all of them are out of service. The other two are on the Ashbridges Bay Wastewater Treatment Plant and Commissioners Street Waste Incinerator.  The picture below is taken from the corner of the ship turning basin looking at the two power generation buildings, with “The Hearn” being on the right. 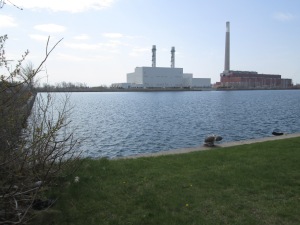 This boat is sitting beside the turning basin.  The name plate on the front identifies it as a CB2 made by Suka Van Vene.

As you walk along Commissioners Street you come to fire hall No. 30, built in 1928.  This building has it’s single bay bricked off and is now used as a meeting hall.

The four buildings along the east side of Cherry Street are all listed as heritage properties.  On the corner is the former Dominion Bank building from 1920.  It is currently in use as Cherry Street Restaurant. 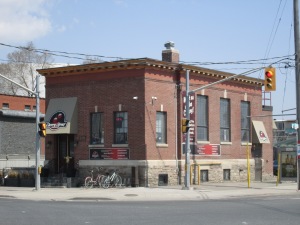 Next to it stands the 1930 Toronto Hydro Substation.

One of the remaining industrial buildings in the port lands is the former William McGill and Company offices.  The company was established in 1871 on Bathurst Street as coal and wood merchants.  Much of the port lands was used for coal storage and distribution.

The Bank of Montreal building on the corner also dates to 1920.  As the city looks to redevelop the port lands it will be allowing residential and commercial development on either side of the new Don river park.  This block has been proposed for condo development but the heritage buildings will be retained in some form.

Also on this small block are some of the few remaining oil storage facilities on the port lands.  At one time large tracts of land were covered with these tanks.  Most of them have been removed and have left acres of contaminated soil behind.

The plan for a new mouth for the Don river received approval Jan 28, 2015 on it’s final environmental assessment.  This clears the way for the river to be disconnected from the Keating Channel and given a new winding, more natural entrance to the harbour.  Soil would be removed, cleaned on site and used in berms to provide flood control.  Trees would be planted and a new green corridor leading into the heart of the city would be established.  A diagram of this was presented in the companion post, The Don Narrows. The picture below shows the area where the new river mouth would be built.  This was once the site of 40 or so oil storage tanks.

An artists conception of the newly created park lands at the mouth of a naturalized Don River. In the background the artist has included the smoke stack from “The Hearn”. 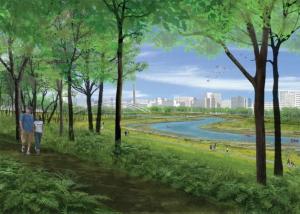 The Docks Entertainment Complex added a drive in theatre in 2000 making Toronto the only city in North America to have a downtown drive in theatre.  It stands on the site of the former Polson Iron Works Limited, a Toronto ship building company founded in 1886.  In the redevelopment scheme, Polson Slip, where they launched their ships, would be converted into the mouth of the river. The 1930 Strauss Trunnion Bascule bridge over the ship channel is seen in the background.

Having seen the turning basin once, I don’t see why I would ever walk down Commissioners Street again.  The beach, however is another story.  You can walk along the beach in one direction and take a small nature trail on the way back. 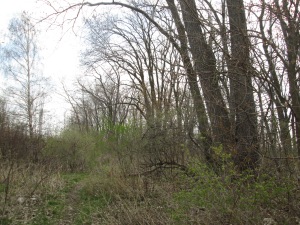 I’m waiting to see if they will actually complete the naturalization plan for the mouth of the Don River.  That may never happen, but I just might go with my wife to a drive in movie on the waterfront this summer.

Look for a gallery of unpublished photos at http://www.facebook.com/hikingthegta