Victoria Day in Ontario and so I had the day off work.  The weatherman was calling for rain starting later in the morning so I decided to make a quick exploration before it started.  As it turns out there was no need to rush because it didn’t rain.

John Nicol arrived in 1828 and built a grist mill on this site.  As the farming community grew around the mill it was converted to also be a feed mill.  It provided flour to farmers and feed to their livestock until 1900 when it burned down.  The community was without a mill until 1907 when it was replaced with this current building.  The settlement came to be known as Nicolston when the post office arrived.  As the town grew it gained a post office, hotel, blacksmith shop, school, a woolen mill and general store.  The town slowly disappeared and the mill was closed in 1967.  It was the last water-powered mill to close in South Simcoe.  The mill area has been converted to an RV campground and it is posted as no trespassing unless you are registered as a camping guest. 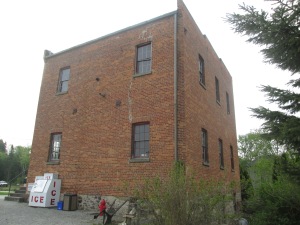 The river above the mill dam was quiet and is marked as no fishing. 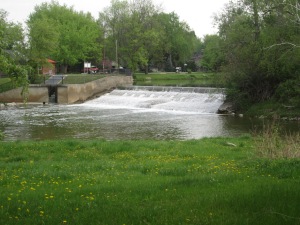 Many fish migrate between the sea or open lakes and fresh water streams and these fish are known as diadromous.  When settlers arrived and started to put dams up across the local rivers and streams they caused a major disturbance to the migration patterns of fish.  In 1837 Richard McFarlan built and patented a fish ladder to let fish get around his dam in Bathurst New Brunswick.  Nichols mill dam has a fish ladder as can be seen in the picture below.  I wonder if maybe Darwin had seen a fish climbing a set of stairs and that inspired his theory of evolution?

Various wheels transfered the power from the wheel or turbine to the grinding stones inside the mill.  The wooden ribs are slowly falling out of the largest wheel.

Nicolston’s Mill has a large water turbine on the side lawn. Water forced this wheel to turn and transfer energy to a series of wheels and drives like those pictured above.

The spiral casing held the turbine blades causing them to spin by the force of the water rushing through the chamber. 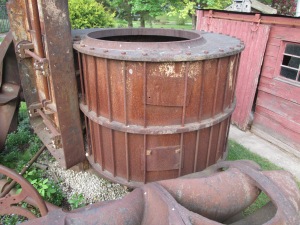 After visiting the mill I decided to take a drive into the countryside to see what I could see.  I found an old closed road that appeared to still have an accessible road allowance.  Along here I found the remnants of a shed which contained several interesting artifacts that appeared to need a good home.

The Calumet Baking Powder Company dates to 1889 when it was established in Chicago Illinois. The company is named after a local word for peace pipe and the area of Calumet City. The company adopted an Indian Head for a logo which later appears to have been copied for the Chicago Black Hawks logo. The baking powder was known as double acting because it started to work while it was being mixed but continued working in the oven as well. In 1929 when General Foods bought them out, Calumet became a brand name for General Foods to distribute under. This little tin was a free promotional sample which was distributed by General Foods Toronto. 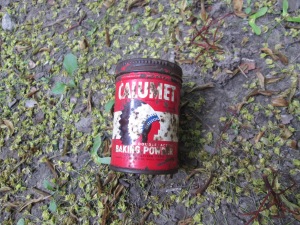 I also found a Carruther’s Whole Milk Dairy bottle with a small chip in the lip.  Located at 1315 Davenport Road they marketed their milk with the slogan “Carruthers’ Milk – Stands for happiness and good health, and is essential to both.”  They are listed in the 1928 Department of Agriculture listing of Cheese Factories and Creameries. 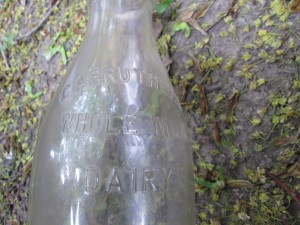 In May 1868 Dr. Samuel Pitcher was granted a patent for a product known as Castoria.  It was sold as a laxative.  In 1871 Charles Henry Fletcher bought the rights and renamed the product Fletcher’s Castoria.  The bottle I found says Dr. S. Pitcher on it making it one of the first three year’s production. 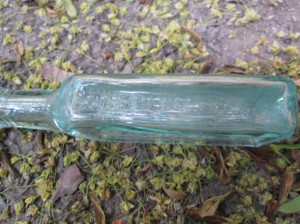 Minard’s Liniment was invented in the 1860’s by Dr. Levi Minard in Nova Scotia.  Made with camphor it provided instant relief for sore muscles.  Minard’s liniment is still sold today but you have to travel to the back roads of Ontario to come up with a bottle from the 1880’s like the one pictured below.

The town of Nicolston isn’t much more than a mill and a new subdivision on the hill overlooking it.  This is the view of the mill as you drive up the hill and out of town on the 5th line. 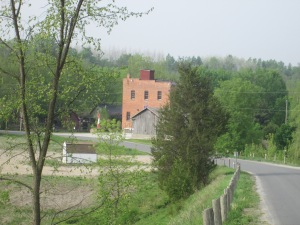