Seventeen degrees under mostly cloudy skies but as the cover photo shows, when the sun came out it was a beautiful day.  Earlier in the spring we had made several visits to the Credit River, working our way north.  The next set of mills north on the river were at Norval on the Credit, now known simply as Norval.

In 1818 the natives ceded the last piece of riverfront for use by settlers.  The earliest pioneer in Norval was Alexander McNab, a loyalist who arrived in 1820.  His brother, James, was a veteran of the War of 1812.  James built grist and saw mills on the Credit.  The village was known as McNabville or McNab’s Mills until the post office opened in 1838 when the name was changed to Norval.  The village grew because it was a transportation hub and a main stage coach stop along the route from Toronto to Guelph.  It had several hotels, the usual blacksmith and carriage shops plus less frequent industries like broom makers and an ashery.  The photo below from 1910 shows the flour mill, grist mill and cooperage (where the barrels were made for shipping the flour).  We parked on the side of Adamson Street North looking out over the Credit River and the former mill pond, which can be seen in the cover photo. 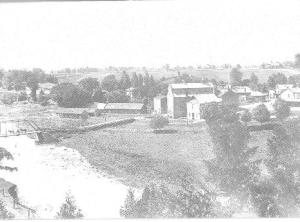 Where Winston Churchill Blvd runs through Norval it is called Adamson Street after General Peter Adamson who bought the mills in 1838.  In 1845 Gooderham & Worts expanded their interests by purchasing the mills in Norval.  They acquired other mills along the Credit River including both Alpha Mills and Silverthorne Grist Mill in 1860. As you walk along you can see the east end of the Norval dam through the barbed wire fence. The picture below shows the hand wheel and gears that opened and closed the gates to control the water level in the mill pond.

The current bridge over the Credit on Adamson Street was opened in 1989 and replaced a wrought iron bridge from the 1880’s.  From this bridge we spotted the Red Breasted Grosbeak in the picture below.  Only the male has the bright red splash on the chest.

The original McNab house was built on the west side of the river, below the dam.  When Adamson took over the mill he put an addition on the house.  Today you can walk through the spot where the house had been without seeing a trace.  The Norval dam is seen pictured below from the west side of the river.  The cement construction indicates that this replacement dam was built in the 1900’s.  Earlier wooden dams were rebuilt on a regular basis as they didn’t last through severe floods.  The sluice gates stand on the left (east end) of the dam.  A fish ladder runs up the west side of the dam and the area near it is a fish sanctuary.

The sluice gates as seen from the west side of the river.  The steel wheels and rods that lifted the gates can be seen on the top of each one.  The sluice gates have trapped a significant amount of trees and branches that are building up behind them now that it is no longer kept clear.

The head race ran across Adamson Street and over to the mills which stood where McNab Park is today.  The flour mill burned down in 1930 and the grist mill was destroyed by Hurricane Hazel in 1954.  With the mills out of use, in 1961 the head and tail race were filled in and two of ten bridges in town were eliminated.  The remains of the mill foundations were removed when highway 7 was expanded in 1972.  From Mcnab Park you can see the foundations for an earlier bridge on the east side of the Credit.  With the arrival of the Guelph Plank Road in 1851, the Grand Trunk Railway in 1856 and the Toronto-Guelph Suburban Railway, Norval and it’s mills prospered.

Fiddleheads are very tasty when fried in butter.  They contain antioxidants and are high in omega 3 and 6 fatty acids.  They are harvested when the young fern tips are still tightly curled. Unfortunately, this field has opened up a little too much.  We were probably three days too late to enjoy this year’s crop. 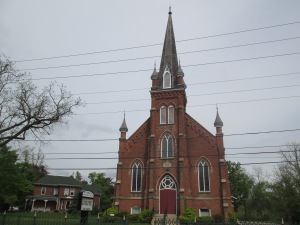 The only congregation remaining in it’s original church building is the Anglican Church.  Their building was erected in 1846.

In 1854 Arthur Little built this home and operated his shoemaking business here. The lilac bushes he planted in 1878 are currently in full bloom. The most striking thing about this home is the brick wall that can be seen through one of the side windows on the first floor bringing up images of Edgar Allan Poe’s “The Cask of Amontillado”. 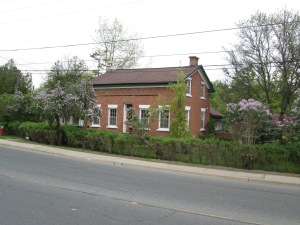 The carriage maker’s shop can usually be identified by the second story door used to dry painted parts.  We saw plenty of deer tracks but had to settle for the deer on the door of this building as our only sighting.

Perhaps this is a locally made carriage. 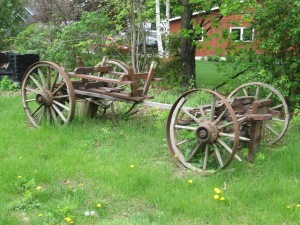 Norval is a village that is full of historic buildings and bridge foundations.

2 thoughts on “Norval on the Credit”