Trout Hollow has been abandoned three different times and today is a ghost town.  I was on a grand tour that took me from Toronto to Orillia, over to Meaford and then back to Toronto. Down time was needed in Meaford and so one of my brothers and I set off to further explore some of the Georgian Triangle Area (GTA).  After having visited Sixteen Hollow on Saturday and now finding myself in Trout Hollow I decided I had better complete a trilogy and visit Hermit Hollow while I have a week’s hollowdays from work.

We parked on 13 sideroad off of the 7th line a little south west of Meaford.  The area we accessed as we went down the old road allowance is known as Trout Hollow.  Following the yellow side trail where it goes to the right off of the road allowance brings you past one of many 1940’s era cars that have been pushed down the hillside prior to the growth of the current forest cover.  Rainbow trout run in the Bighead River and there are often anglers in the hollow trying to catch a fish.  However, as we shall see, that is not the reason for the name of Trout Hollow.

In June of 1855 William Trout Sr. bought 200 acres of land on the Bighead River where there were good trees and plenty of water power for a saw mill.  Things were a little fishy from the beginning in that mill and property was secretly deeded to the Trout boys from the beginning. William hinted that he would leave the mill to them so that his children would take good care in helping him build and operate it.  Work was slowed when the Trout men were called away to contribute their millwright skills at a mill being raised near Inglis Falls.  The raceway, head protecting dam and flume were completed and the winter of 1856 was used to prepare the log crib that when filled with gravel would dam the creek.  A log house was constructed in 1855 for the use of the mill workers.

Wood was plentiful and there were settlers coming into Meaford making the Trout mill quite profitable.  In 1861 the census shows William H. Trout (Jr.) had an inventory of 66,000 board feet of lumber. A slight recession following the end of the Crimean War led the Trout family to convert their saw mill into a handle factory which they automated with the help of John Muir. John had previously invented an alarm clock bed that dumped the occupant at the prescribed hour.  The Trout Handle Factory produced handles for rakes, brooms and yokes.   A fire in February 1866 destroyed the buildings and all the inventory.  Trout saw mill was finished and the site abandoned.  For a brief period in the 1870’s The Pleasant Valley Grist Mill operated on this site but it soon closed and Trout Hollow lay silent for 25 years.

The Bighead River can be seen winding it’s way into the town of Meaford from the lower left corner of the shaded area in the 1877 County Atlas map below.  Tracing it back you come to the right of way for the 12/13 side road where it takes a detour down the side of the ravine to improve the angle and make it less dangerous.  The modified road allowance is seen crossing the river in Trout Hollow which has vanished by this point and is not noted on the map.  In 1858 this road accessed only the mill in Trout Hollow and did not cross the river.  There was a public uproar when it was decided to use government funds to repair the wood braced roadway down the hill side with stone.

In 1904 an electrical power generation plant was built that resulted in the concrete dam across the river than can be seen in the picture below.  The story of the power plant can be read in the Georgian Bay Milling and Power Company post. Today the two abutments remain with the smaller one being in the distance but actually on this side of the river.  The dam on the far side has lost the protective embankment to erosion and is leaning into the river.

The dam was damaged in a storm in 1912  but was repaired and used until the power company closed in 1923.  The crank wheels that raised and lowered the sluice gates have been ripped off of the left anchor and now dangles toward the river.  The block of concrete that holds the remaining anchor is sliding toward the river and will likely soon topple in.  The cover photo shows a look up the sluice gates and shows the extent of the collapse.

The abutments on this side of the river are little more than a short wall of concrete. 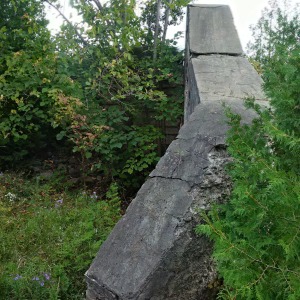 This high bank of Algonquin Beach Gravel is in constant erosion.  Where it once provided the upstream berm for the power dam it now has crept back to the point where it allows the river to run behind the dam during flood time.  This is accelerating the deterioration of the old dam and sluice gates. 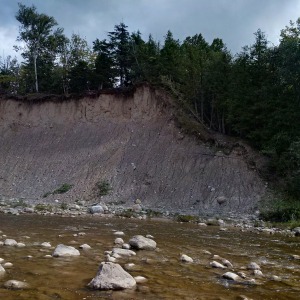 Along the berm that forms the wall of Trout Lake is a second set of sluice gates.  These gates controlled the water in a narrow finger lake that fed the Georgian Bay Milling and Power Company.  The picture used below was taken in October 2014 during that exploration. 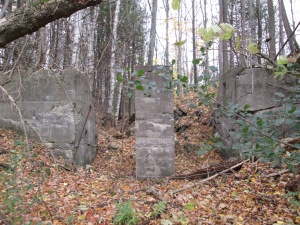 Along what is now known as Flume Trail you can still see traces of the wood from the open flume that carried the water from Trout Hollow lake to the power generating station. 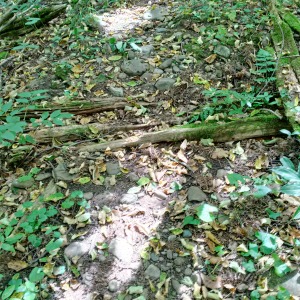 The metal down tube remains on the side of the hill where it was once connected to the wooden flume.  From here the water was dropped to the settling basin where the turbine wheel was located.

The road is shown as crossing the river in the 1877 county atlas but there is no longer any sign of a bridge.  The power line shows where the road approaches the river on either side.  A few decades ago it was possible for certain high school students to drive across the river here when the water levels weren’t too high,

The failure of the industries in Trout Hollow reminds us of the hardships faced by small businesses in the Victorian era.  Lack of resources and capital often caused them to fail when the economy changed and they were frequently unable to recover from tragedies such as the fire in Trout Hollow.