In the early 1900’s Toronto’s wealthy elite bought large country estates on the edge of the city where they kept their horses and engaged in fox hunts for leisure.  They moved to the Bayview and Lawrence area where they could live in opulence in their grand English styled mansions. Most of these lots featured the steep ravines of the West Don River and it’s tributaries.  Several of these grand homes are featured in Bayview Estates and today we look at the former estate that now contains Sunnybrook Hospital and Sunnybrook Park.

Joseph Kilgour along with his older brother Robert had made their fortune in the paper industry.  In 1874 they started Kilgour Brothers in Toronto where they specialized in paper bags and cardboard boxes.  The business grew into one of the largest of it’s kind in the country under the name Canada Paper Box Company.  In 1909 Joseph and his wife Alice bought a 200 acre lot south of Lawrence Avenue where he established Sunnybrook Farms.  It was one of the first country estates along Bayview Avenue and one of the largest as well.  Starting at Bayview (first line east) and Blythwood it stretched across to Leslie Street (second line east).  Joseph died in 1926 and although Alice would live for 12 more years she transferred the land to the city for a park just two years later. Joseph and Alice built themselves a grand country manor in the English tradition.  The home had high wood beam ceilings and oak paneling on the walls. The open gallery made it ideal for hosting parties and displaying a couple of his hunting trophies.  An archive photo of the inside of the Kilgour mansion around 1910 is seen below.  Note the rooms that exit off each side of the gallery. 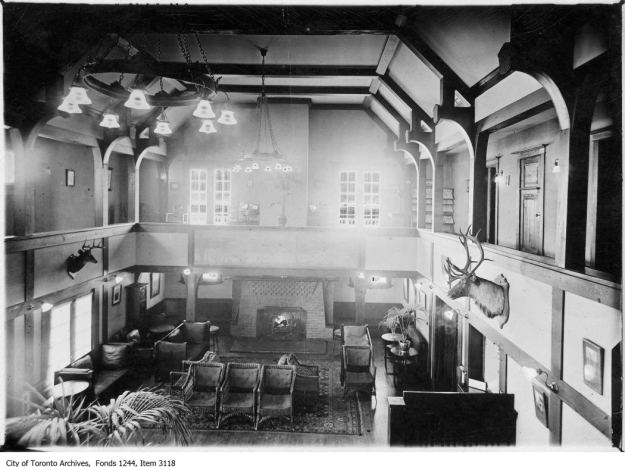 The house has since been removed and Sunnybrook Hospital was built in it’s place. Having parked on Stratford Crescent, just east of Bayview, I walked through the Sunnybrook Hospital grounds keeping the single smoke stack in view at the rear of the facility.  At the back of the hospital campus is a former access road that leads down to the stables and a parking lot at the bottom of the ravine.  The sign at the top of the hill says that access to Leslie Street is closed.  One of the conditions of the park is that there should never be a road running between Bayview and Leslie.  For that reason the bridge at the bottom of the hill has been closed. The bridge also supports a cast iron water pipe as it crosses the West Don river from the former mansion to the stables.

Major Kilgour was one of the best known horse men in North America.  His reputation for keeping a well bred stable of hunting horses was celebrated, as was the farm he built.  He named the estate Sunnybrook Farm and it was considered to be the perfect model hobby farm in it’s day.  The stables were used by the Metropolitan Toronto Police for their mounted unit to house their mounts until they moved their horses to the horse pavilion at Exhibition Place in 2005.

Kilgour built one of the first indoor riding arenas in Canada.  It also featured a viewing gallery with the provision of a section for a minstrel in the gallery.  Groomsmen’s quarters provided living space for the men who took care of his horses.

The stables were built adjacent to the Don River with the table lands above used for horse riding and frequent fox hunts.  Today this area can be reached by a road to a parking lot or by 86 stone stairs that climb the ravine behind the stables.  The former plateau has been converted to a series of sports fields.

Kilgour and his prized hunter Twilight would host fox hunts with 30-40 members of the Toronto Hunt’s Hounds riding in pink outfits on the plateau above the stables.  The Toronto Archive picture below is from around 1910 and shows Joseph and Twilight.

As I made my way along the edge of the playing fields in search of the 116 stone stairs that would lead me back down to river level I was surprised to see a group of a dozen robins. Robins will stay over winter on occasion and with this year’s warm weather it’s possible some may have. These ones seem quite plump and I wonder if they didn’t get pushed a little north by the recent blizzard in the United States. 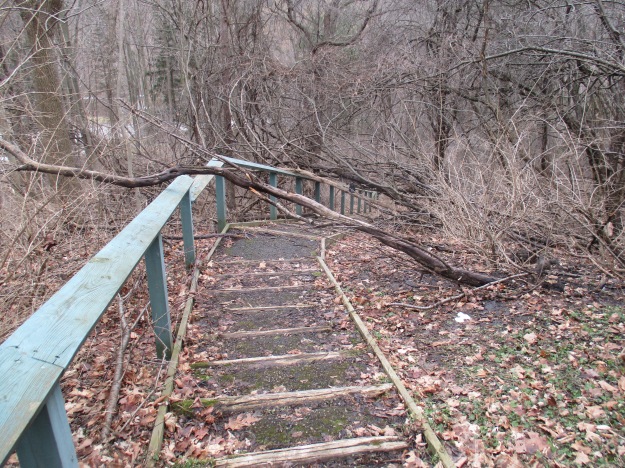 After making my way back down to the river level I stopped to check out a 150 year old log cabin that has been reconstructed in the park.  The Rotary Club of Don Mills moved this pioneer home here and dedicated it on July 16, 1975 to the people of Toronto.  The dedication plaque quotes John Milton from Paradise Lost “Accuse Not Nature, She Hath Done Her Part, Do Thou But Thine.”  This is a suitable motto for Hiking the GTA as well. Nature did it’s part, yours is to get out and simply enjoy.  Leave the wild flowers behind, but not your garbage.

Last year in February we walked across Etobicoke Creek to investigate what turned out to be a coyote mating ritual.  Based on current conditions I’m not sure I’ll be walking on any of the local waterways this year.  If you follow the West Don River upstream from Sunnybrook Park you enter an area known as Glendon Forest.  This forest is one of the largest natural areas in central Toronto and is a unique wildlife habitat that waits to be explored in the near future.  Two waterways join the Don River in Sunnybrook Park. Burke Brook enters the Don River just upstream from the stables and Wilket Creek enters just downstream.

For many years Sunnybrook Park was known as Kilgour Park and a set of elabourate stone gates marked the entrance off of Bayview Avenue.  The archive picture below is from 1933 and shows what the entrance to the roadway that I had used to access the river and stables in the valley looked like at the time.  Sunnybrook Park was granted as a perpetual free park for the citizens of Toronto but with permission of the family heirs a section was transferred to the government for construction of the hospital.  The gates were removed in the mid 1940’s when the hospital was built but a second set of gates remain in the park. The ones in the park have a plaque commemorating the 1928 donation of the park by Alice Kilgour.

Sunnybrook Hospital has it’s own tales to tell.