The first bridge between Queenston on the Canadian side of the Niagara River and Lewiston on the American side was built in 1851.  It was a suspension bridge and was destroyed by in a wind storm and not replaced until 1898.  That was the year that the Second Falls View Suspension Bridge was moved to this location.  In the years in between the towns were served by a ferry that crossed the river.  The first suspension bridge is seen in this photograph from closer to the time of replacement. 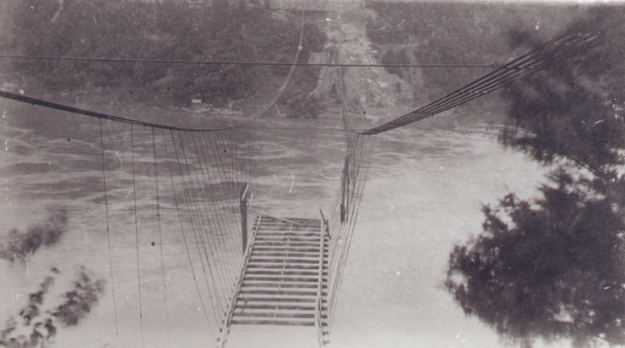 The original Falls View Suspension Bridge was built just south of the American Falls in 1867 and opened officially on January 2, 1869.   Twenty years later, on January 9th, the bridge was destroyed in a storm.  By commissioning a bridge of the same design a lot of time was saved and construction began on the Second Falls View Bridge on March 22, 1889, and lasted for only 38 days.  Just 117 days after the collapse of the first bridge, on May 7th, the second bridge was opened.  It was also known as the Niagara Clifton Bridge and can be seen in the Currier and Ives painting below.

Built in 1897 and opened in 1898 the Upper Steel Arch Bridge, or Honeymoon Bridge, was built 14 feet closer to the American Falls than the Second Falls View Bridge.  After it was opened the suspension bridge was dismantled and moved to serve as a replacement Queenston-Lewiston Bridge.  The Honeymoon Bridge would eventually collapse on January 27, 1938, when ice build-up in the river pushed the abutments over.  An arch bridge known as the Rainbow Bridge was built as a replacement and has been in service since November 1, 1941.  If you follow York Street past the last houses it is blocked to vehicles by large stones but pedestrian traffic is still allowed.  The old road bed can be easily followed because the pavement is visible in many places.

After it’s installation in Queenston the suspension bridge served until November 1, 1962, when the current Queenston-Lewiston Bridge was opened.  The new arch bridge is modeled on the same design as the Peace Bridge making it, in a round-about way, the second time this design has replaced this same suspension bridge.  The trail is marked with blue slashes on the trees, and look, they left the gate open!

Along the abandoned road there are places where earlier attempts have been made to reinforce the embankment.  In some places, the vines and bushes have almost obscured the old blocks of cut limestone.  In another spot, a large chunk of stone has broken away from the embankment and rolled onto the former roadway.

A large steel support for the crane that was used to remove the suspension bridge stands to the side of the abutment.  Nature is turning it into a planter.

The towers and abutments were made of cut limestone blocks. 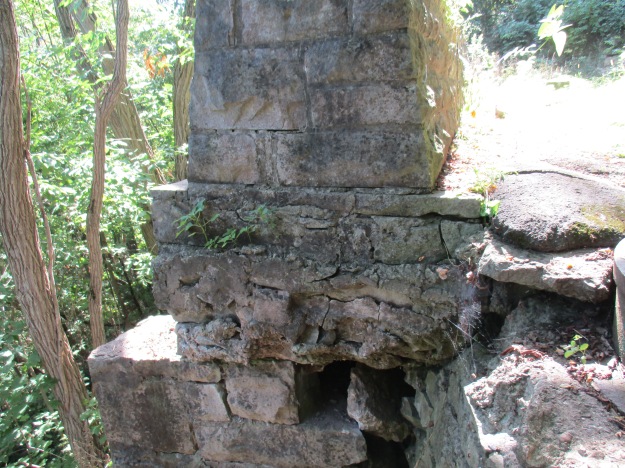 From the level of the river, you can get a good view of the two towers that remain on the American side of the river.  A steel sculpture and observation deck were added in 1981 by Owen Morell.

The old abutments look pretty impressive from below.

A curved steel rail is embedded in the old roadway near the abutment.

Looking over the side of the abutment you can see one of several places where steel support columns have been cut away.

The suspension bridge was dismantled in 1963 and sold to a scrap yard.  The archive photo below shows the bridge with most of the road deck removed. 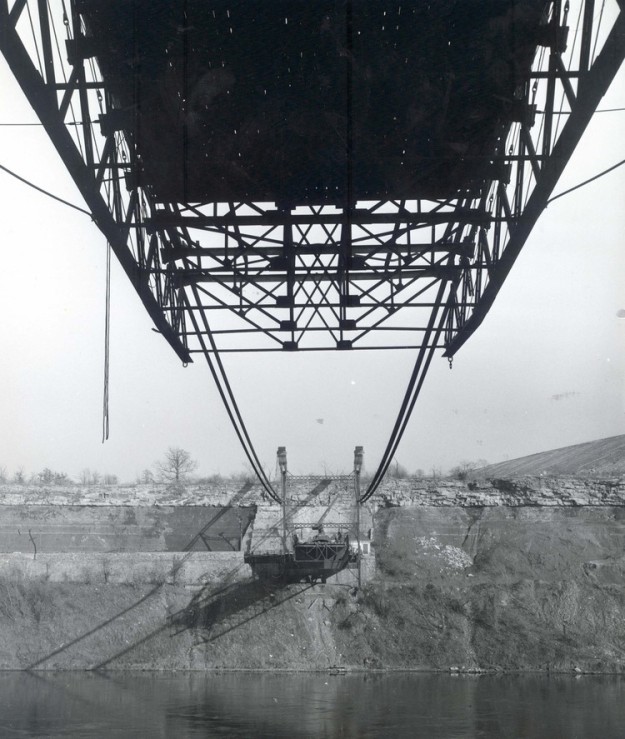 1 thought on “The Second Queenston-Lewiston Bridge”