The Niagara River extends for about 35 kilometers from Lake Erie dropping less than three feet in height until it reaches the Upper Niagara Rapids.  It drops another 15 meters through the kilometer rapids as it reaches the brink of the falls.  There are a couple of interesting things along the stretch of rapids above the falls.  It was here in 1786 That John Burch built a saw and grist mill which was the first industry on the Canadian side of the river.  These mills were torched by the American Army when it retreated on July 26, 1814, after the Battle of Lundy’s Lane.  In the middle of the river, near the powerhouse, sit the remains of an old dumping scow.  On August 6, 1918, the scow broke loose from the tug it was tethered to and started drifting toward the falls with two men on board.  They opened the dumping chutes on the bottom and the scow grounded on the shale in the river just before they would have been carried over the falls.  They were rescued the following day on a line shot out from the roof of the powerhouse.

In 1906 The Electrical Development Company of Ontario opened a beautiful building as home to their powerhouse.  This building supplied the Toronto market and was in operation until 1974.  In 1950 a treaty was signed by both the Canadian and American Governments limiting the amount of water that can be diverted from the falls and the hours in which it can be done.  During “tourist hours” the flow must not be less than 2832 cubic meters per second and it can be cut to half of that overnight. 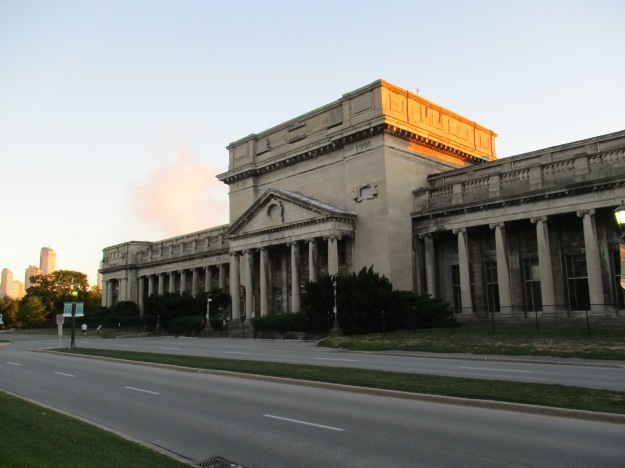 The Canadian Falls drops an average of 57 meters and there is a 52 meter deep plunge pool at the bottom.  Six million cubic feet of water goes over the falls every minute.  The process that erodes the falls and causes it to carve through the solid rock is known as cavitation.  As the water goes over the falls it picks up speed and loses internal pressure.  This allows air to escape as bubbles or cavities.  When the water comes to rest these cavities collapse sending out shock waves that help disintegrate the rock at the base of the falls.  The falls are expected to cut back for another 15,000 years at their current pace before they reach an old riverbed about 6 kilometers upstream.  At that time erosion will increase rapidly and the falls may be replaced with a series of rapids.  It should take about 50,000 years before the remaining 20 miles to Lake Erie is cut through.

Looking downstream you see the American Falls on the right.  It ranges between 21 to 34 meters and carries less than 7 percent of the river’s water.  It is less spectacular because of the talus at the bottom caused by collapses and landslides.  It is estimated these falls could dry up in 2,000 years or so. 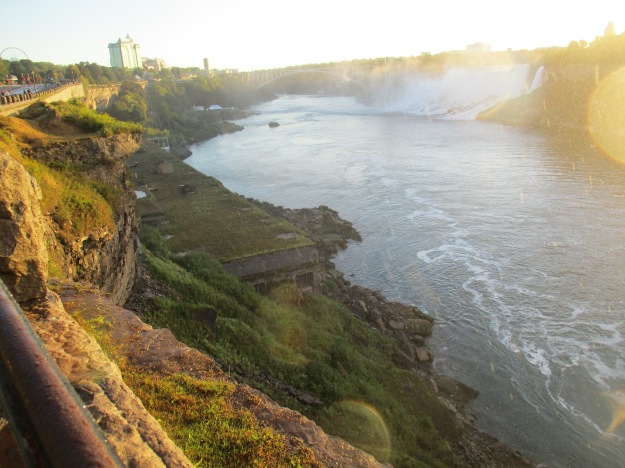 The Bruce Trail runs from Queenston to Tobermory and follows the Niagara Escarpment for an 890-kilometer hiking trail.  Earlier in the week, I had used a day of holidays to visit the northern terminus of the trail and so it was fitting to visit the southern one as well.  The southern one stands in Queenston Heights Park near where the Niagara Gorge begins. This is also near the point where the original Niagara Falls began cutting a path through the escarpment on its slow journey to Lake Erie. 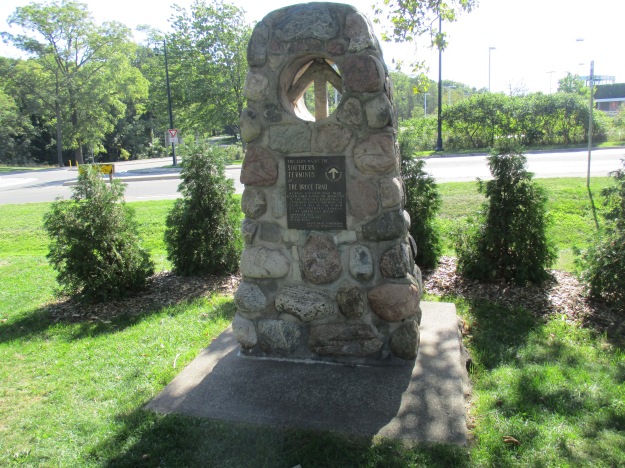 Queenston Heights Park is the site of one of the battles of the War of 1812.  It was during the Battle of Queenston Heights on October 13, 1812, that Isaac Brock was killed.  The current monument to Brock was built to replace an earlier one which was blown up in 1840.  For a small fee, you can climb the 235 spiral stairs inside the monument.  From the small portals at the top you will have a great view over the area.  In the picture below the casino and tall hotels in Niagara Falls Canada can be seen.  This shows you the distance that the falls have cut through the escarpment.

Looking to the east, past Queenston, the Niagara River appears peaceful as it flows to Lake Ontario.  The tableland below the escarpment does not have any gorge because the falls began to the west of here.  The cover photo shows the start of the escarpment on the American side of the river and the site of the original Niagara Falls. 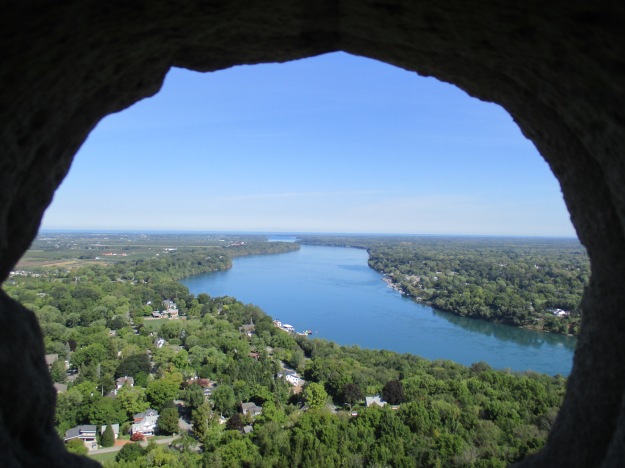 The building below is the one that housed The Colonial Advocate, a paper published by William Lyon McKenzie which called for government reform.  The seeds of the rebellion of 1837 were planted from this newspaper.  In front of the house stand two honey locust trees that are part of 5 he planted on April 18, 1824, when he started his paper.  One of them can be seen just behind the chimney in the picture below.

A blue marked trail leads away from York Street in Queenston and heads toward the river.  As you follow it you will see old pavement indicating that you are on the road that led to the old Queenston-Lewiston Bridge. 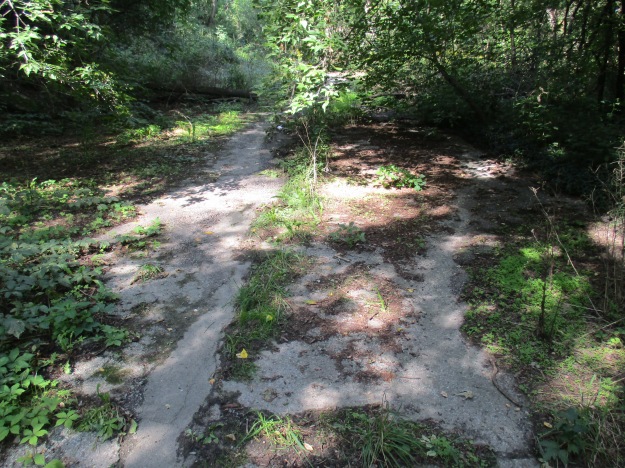 This archive photo from 1915 shows the Queenston-Lewiston suspension bridge.  Notice how exposed Brock’s Monument is compared to the forest it now stands in.  The bridge stands at the foot of the escarpment and the 90-degree turn in the river can be seen upstream.  This is the site of the Whirlpool Rapids.  When the erosion of the gorge reached this point, about 5,500 years ago, it encountered an old riverbed that had been buried in the previous ice age and creating the bend in the river.  The water racing downstream from the falls is forced under the surface here creating the whirlpool effect can be seen on the surface. 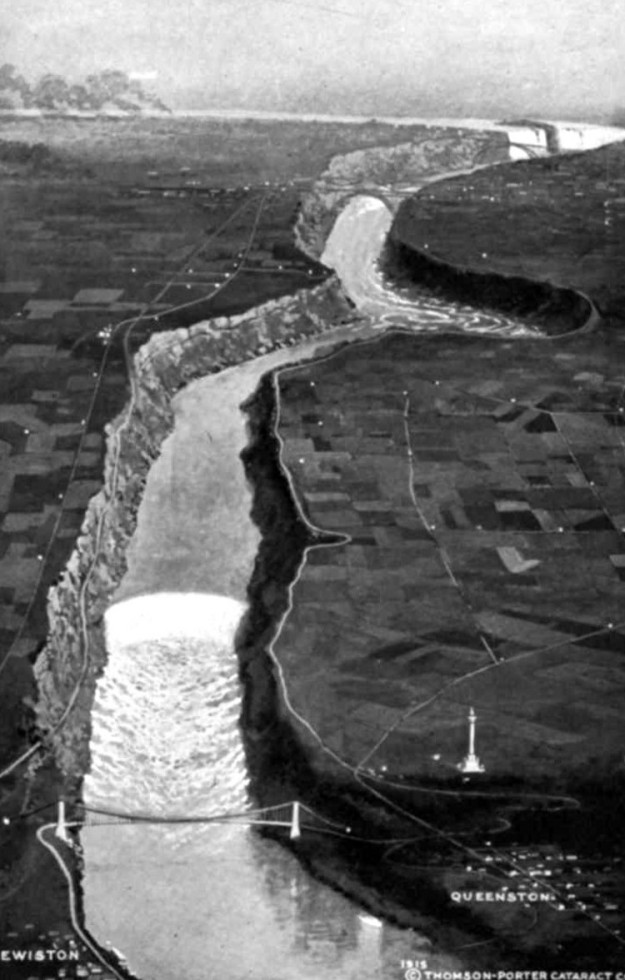 The Quennston-Lewiston Bridge was replaced in 1962 with the current bridge.  The suspension bridge was removed the same year but abutments remain on the Canadian side of the river. 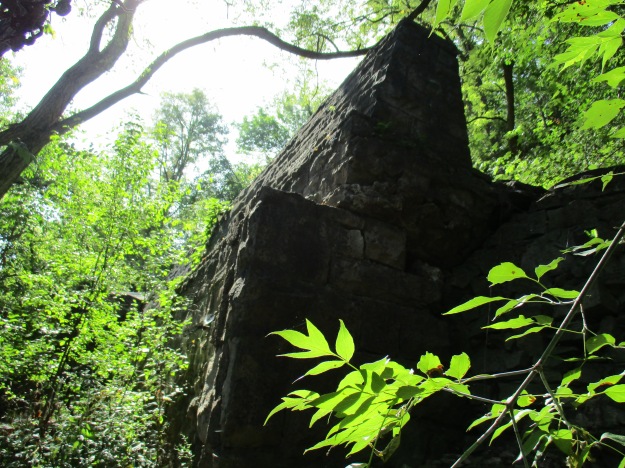 An observation deck has been built above the remaining bridge abutments on the American side of the river. 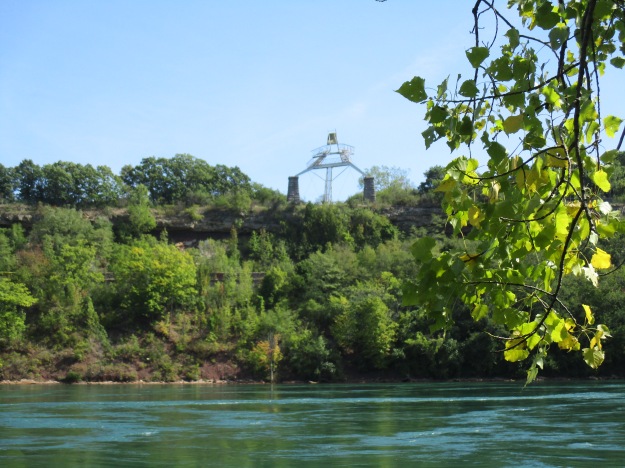 The water in the Niagara River has an interesting shade of green due to dissolved minerals in the water.  Every minute over 60 tonnes of minerals are carried over the falls, mostly limestone but some shale and sandstone as well.

This part of the province has some of our earliest history and there is plenty to explore on future trips.

7 thoughts on “The Niagara Gorge”