Bruce McLaughlan had a vision of a country resort for the entire family.  In the late 1950’s he purchased an 180-acre farm known as Wynn Standing Farm.  The property is shown as the Estate of John Standing on the 1877 county atlas.   The farm was on the northern edge of Chinguacousy Township and so the original name for the club was Chinguacousy  Country Club.  Today, the club extends from Mclaughlan Road to Chinguacousy Road.  The cover photo shows one of the abandoned chalets that remain on the property.  It, along with the one below, can be seen from the parking area beside the Caledon Trailway on Chinguacousy Road. 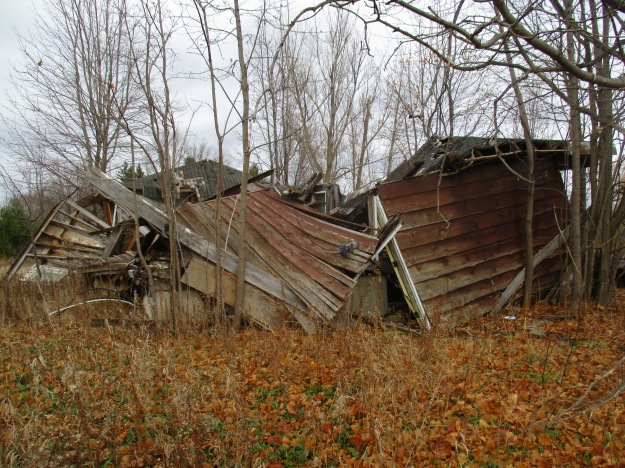 McLaughlan hired Rene Muylaert to design the course even though Rene had never designed a golf course before.  Apparently, Muylaert did a good job as he went on to design over 50 other golf courses in Ontario.  Among these were the Inglewood and Glen Eagle courses.  As can be seen in the pictures presented here, entry to these buildings is very dangerous.  Floors and ceilings have already collapsed and more can go at any time. 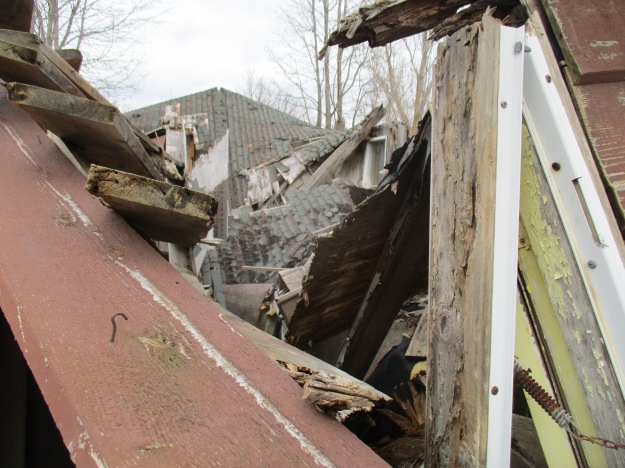 In the summer of 1961 the first nine holes were opened for golfing.  An equestrian riding academy was added and tennis courts were being built.  New for 1961 was a small model farm for children and a supervised playground.  The picture below shows one of the old chalets that is folding in on itself.

Memberships were coming in at twice the rate anticipated and another 70 acres were added to the site in 1962.  Ongoing improvements led to a new club house near the Credit River which was opened in 1963. Chalets that have weathered better than the others have still been broken into and exposed to the elements so that all of them are destroyed.

Next, a series of chalets were added with the intention of providing year-round attractions. Cross country skiing, skating, outdoor curling and horse-drawn sleigh rides were provided as winter activities.  The Chinguacousy  Country Club also expanded to 27 holes, with nine of them being for juniors.  Although the chalets were intended for all season usage there is no evidence of any insulation in the walls or ceilings. 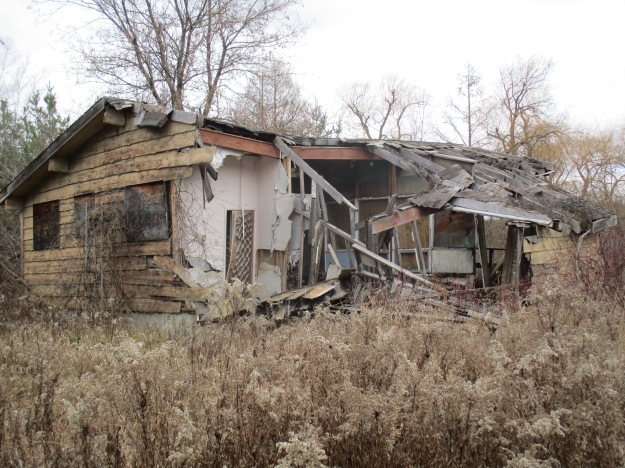 In the 1980’s the riding academy was closed and the junior 9 holes were also removed. The swimming pool had already been closed by this time.  In 1988 the club went from private to a fully public one and took on the new name of Caledon Country Club.  Around this time the rental of the chalets was discontinued as well. They have been in the process of decaying ever since. The local coyote has moved into this cottage as can be seen from the coyote scat that is left at the door to mark this chalet as occupied.

Like many of the buildings, this chalet has given a new meaning to the term “sky light”.

This is another of the 8 chalets that are falling down in the old resort.

The last of the buildings headed east, this one visible from the Caledon Trailway.  The trailway has been created on the former Hamilton Northwestern Railway line.  The Canadian National Railway operated on this line from 1878 until 1967. 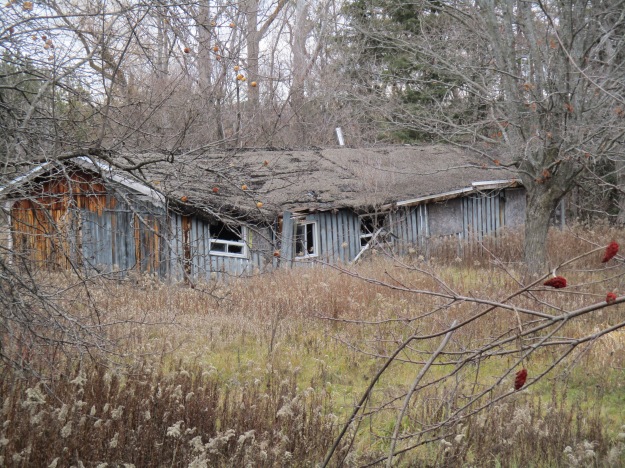 The Caledon Trailway runs through the Golf Club property and can be hiked from here to Inglewood and then on to the Ken Whillans Resource Management Area.