Electricity generated at Niagara Falls is delivered across Ontario in high voltage lines strung between tall steel towers.  The power was then sent to various electrical substations where transformers converted it to a medium power of between 2 kV and 35 kV. Distribution Transformers near the consumer convert the power to 110 V for household use.  The distribution transformers are either pole mounted (large grey cylinders) or pad mounted (large green steel boxes). Starting in the 1930’s the Hydro Electric Power Commission started to hide its transformer substations in what was known as transformer homes. They were designed to hide among the neighbouring homes and altogether around 250 of them were built.  Six basic designs were used but other custom ones were implemented where needed.  Many, like the one at 386 Eglinton Avenue east, imitated the simple wartime housing of the 1940’s and 1950’s.   Today there are still 79 active ones but the one at 386 Eglinton was recently demolished because it had become conspicuous among the highrise towers.

Gardens and trees were planted and the driveway was paved.  Someone came around and tended the lawns each week and many people were fooled by them.  In the 1950’s the area around Sunnybrook Hospital was still home to several large estates for the wealthy.  One such estate sat on the table lands just north of the Burke Brook ravine, on the west side of Bayview Avenue.  In 1958 the property was divided into lots for development and Sunnydene  Crescent was laid out.  There is no parking here except after 6:30 so I parked for free on Blyth Hill Road where a walkway connects to Sunnnydene Crescent.  A power substation was required and it was decided to put it on Bayview near Sunnybrook Hospital. To hide near the hospital this transformer house took on the appearance of an institutional building.  The Toronto Archives aerial photo below shows the transformer house in 1961.

This is the view looking back up the laneway toward Bayview Avenue. 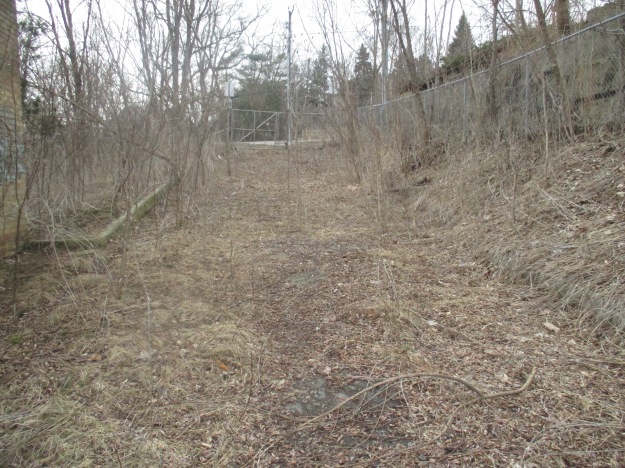 As you make your way down the short driveway you see the front door which has been left open.  The front section contains a single room.  The roof on the front corner is rotting and the windows have been broken out.  Cedar trees hide the building from Bayview Avenue.

The rear or eastern elevation of the building showing the walls protecting the transformers.  Here the high voltage electricity was converted to the household current that was suitable for use with appliances.

This 1924 photo from the Toronto Archives shows the rear view of the substation on Eglinton Avenue.  The Bayview station may have been quite similar only larger and appears to have had no roof over the transformer.

The entire compound has been fenced off but the original structure had a fence around the electrical apparatus.  The sign on the reads “Danger.  Keep Out.  Electrical Apparatus. Admission By Authority Only.  The Hydro Electric Power Commission Of Ontario was renamed Ontario Hydro in 1974 making this sign older than that. 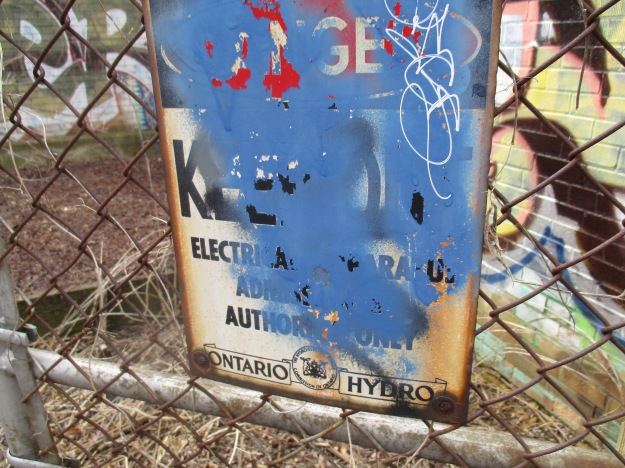 The mounting pads for the tranformers remain in the fenced-off section of the compound. Several trees are growing between the three pads and some of them are several inches in diameter.

The power substation has two doors from the main room to the transformer bay.  They are both well disguised by graffiti.

Someone left the front door open and the graffiti artists have been inside.  A series of breaker boards and voltage dials is likely all that would have been housed inside this room. Many transformer houses had a washroom for visiting technicians.

Inside, the bare room has nothing left but a pair of electric light sockets and a light switch. The ceiling has been deteriorating for the past few years and now has several large holes in it. None of the original windows have escaped the years of vandalism.

The east end of the building is flanked by a pair of walls that isolated the transformers.

Staghorn Sumac have started to regenerate and now hide the southern side of the building.  In the summer it is well hidden from the motorists who pass by on Bayview Avenue. 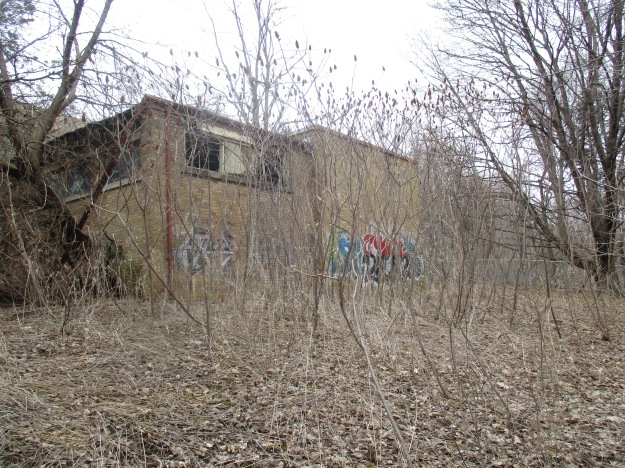 Large underground vaults house newer transformers.  Many of these buildings have been made obsolete by technological improvements and most of those have been demolished.  It is unclear how long this one may last before it finds a similar fate but since it is technically on parkland the developers may not be so interested in removing it.