Black Creek Pioneer Village is built around the homestead of Daniel and Elizabeth Stong.  Their story and a brief history of the village can be found in this earlier post.  Once the decision had been made to collect historic buildings to allow people to glimpse the life the settlers lived it was time to identify potential buildings to put in the village.  Since most pioneer villages were founded around a saw mill, grist mill or woollen mill it was necessary to move a mill to the site at Steeles Avenue and Jane Street.

Owen Roblin took possession of a land grant not too far from Trenton that included a lake that came to be known as Roblin’s Lake.  Owen blasted a head race from the lake to a point where he could create a 75 foot head of water to turn his 30-foot overshot water wheel.  He divided part of his property to create town lots which were the beginning of the town of Roblin’s Mills.  He added a sawmill and carding mill and the town attracted blacksmiths, a harness maker hotels and a general store.  Today the town is known as Ameliasburgh.  The picture below shows the mill around the time it closed.  The building in the foreground is the carding mill and the water wheel is between the two buildings.  The head race runs under the road.  The building in the background with the sloping roof is the File Brothers General Store which closed in 1951. 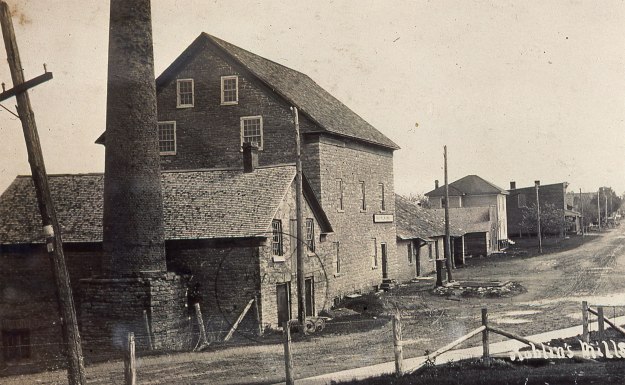 During the peak period around the time of the American Civil War, the mill was producing up to 100 barrels of flour per day.  Most of this was shipped to the northern states where it supported the army.  The mill was closed in 1920 and sat abandoned until 1965 when it was decided to demolish it.  The Toronto Region Conservation Authority (TRCA) was looking for a mill for Black Creek Pioneer Village and decided to purchase Roblin’s Mill and relocate it to the village. 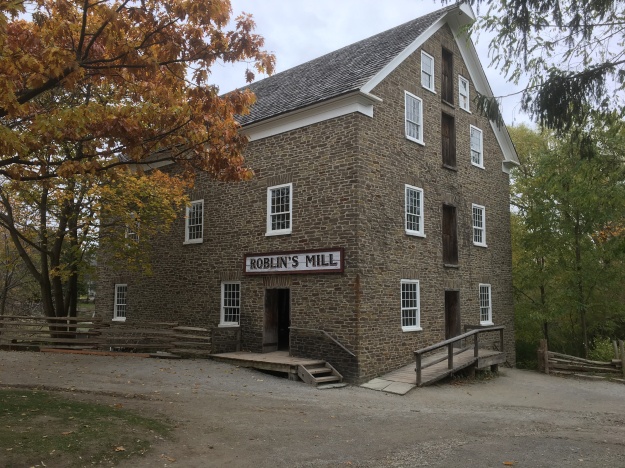 A mill pond was created at the village using Black Creek as a source of water.  There is a second mill pond behind the mill where the water goes after it flows over the water wheel.  This picture shows the upper pond and the entrance to the headrace which also flows under the road. 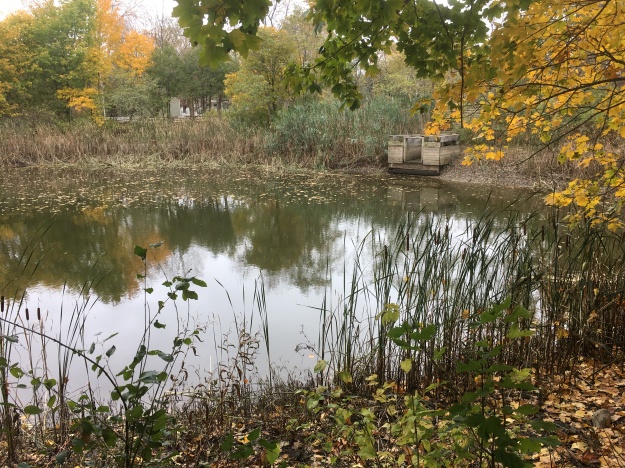 The five-story stone mill was built in 1842 and soon became the focus of the community and included a post office.  As a commercial mill, it operated 24 hours per day with three run of stones.  The picture below and the cover shot show the open wooden flue that carries the water to the wheel. 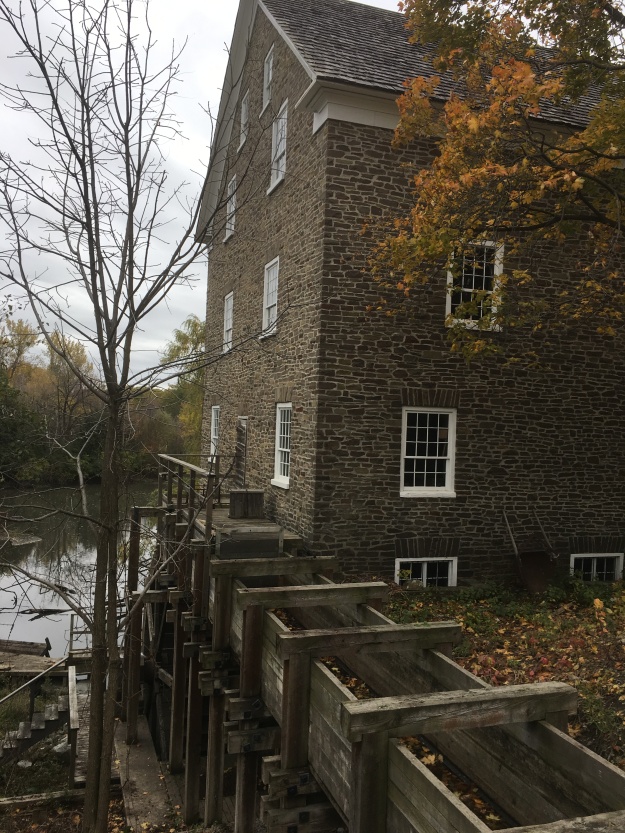 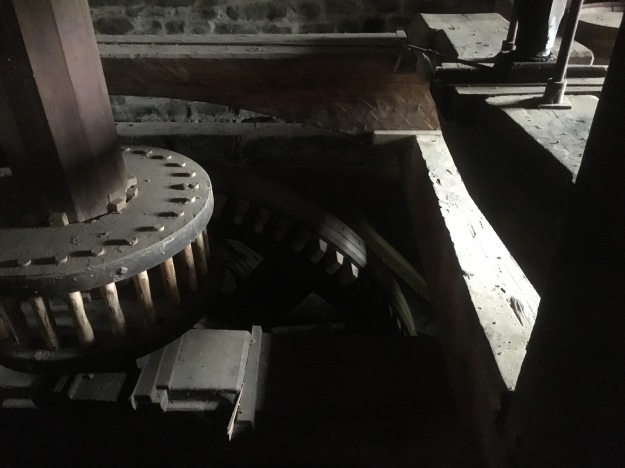 Millstones relied on fine grooves that had to be dressed at least once a month when the mill was running 24 hours per day. 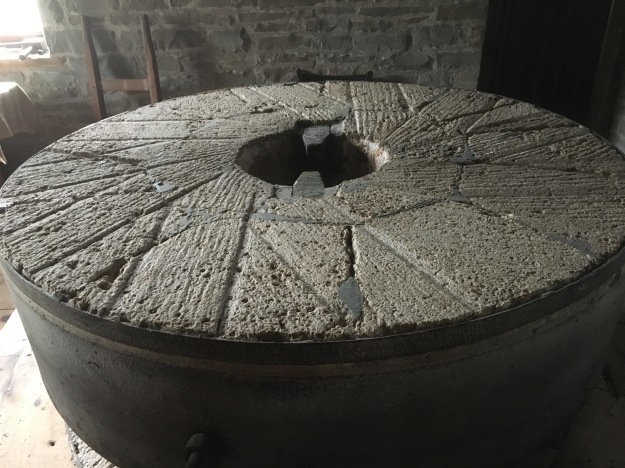 Samples of grain and flour were moved from one floor to the other using these belts and cups. 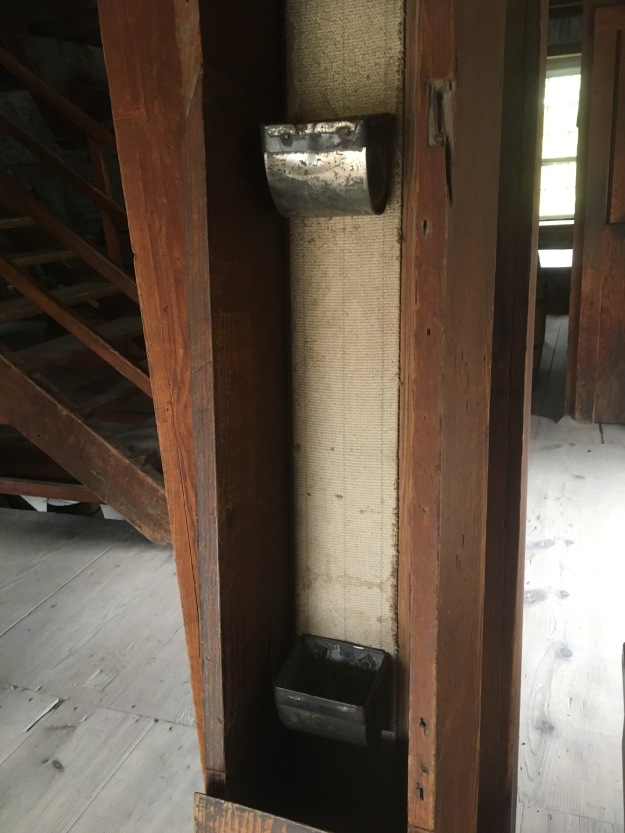 The ground flour was stored in dry barrels that were produced next door in the cooperage.  A dry barrel was less precise than ones known as wet barrels which were used for liquids such as whiskey. 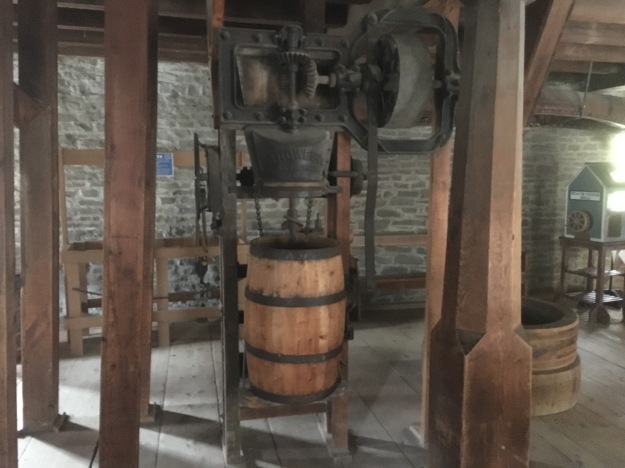 Black Creek has added the cooperage of John Taylor to their collection of buildings.  The building dates to the 1850’s and was moved to Black Creek Pioneer Village in 1976.  It wasn’t restored or opened until 1988.  Coopers often located next to mill complexes so that there was a ready market for their wares. 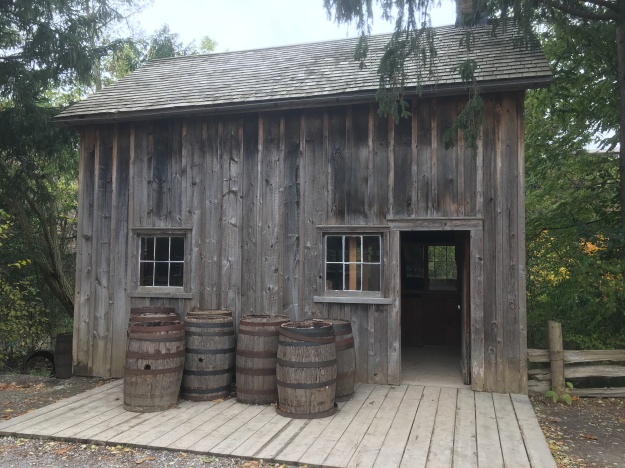 Inside John Taylor’s Cooperage, you can see several types of barrels that were produced in the shop when it was located in Paris, Ontario. 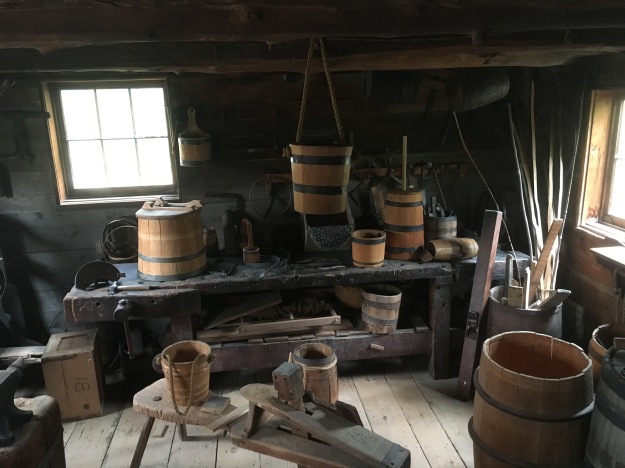 We close with an archive picture of the mill before it was moved to the village. 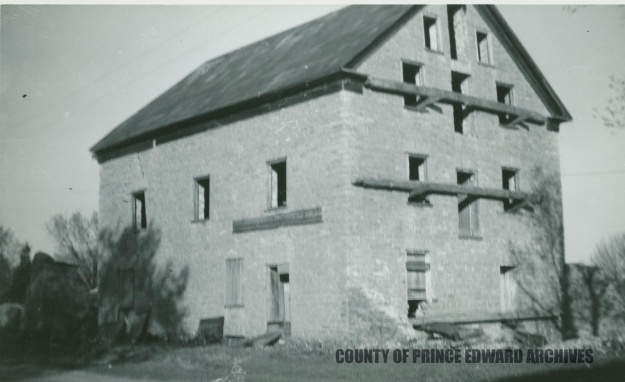 I have yet to see the mill in operation although I have purchased a bag of flour that was milled there.