Humber Bay Park is split in two by Mimico Creek with the two sides being cleverly named East and West.  They sit at the west end of the Humber Bay shoreline.  Both sides of the park have parking lots accessible off of Lakeshore Boulevard.  In 1970 the Lakeshore bridge over Mimico Creek was right at the mouth of the creek. 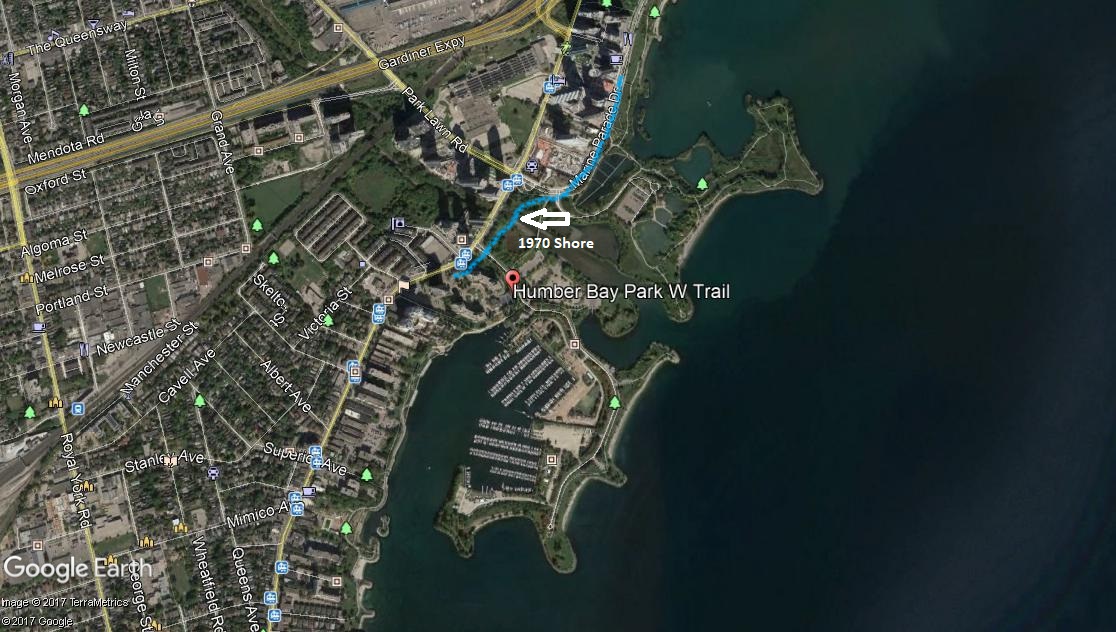 All of Humber Bay Park has been created by lake fill since that time. It was developed by the Metropolitan Toronto and Region Conservation Authority and is operated under the authority of Metropolitan Toronto Parks.  We parked in the west side of the park and the picture below was taken along the shore. It shows that the park is made of what is considered clean fill. This is mostly bricks and concrete from demolition projects which supposedly does not contain any environmental hazards. 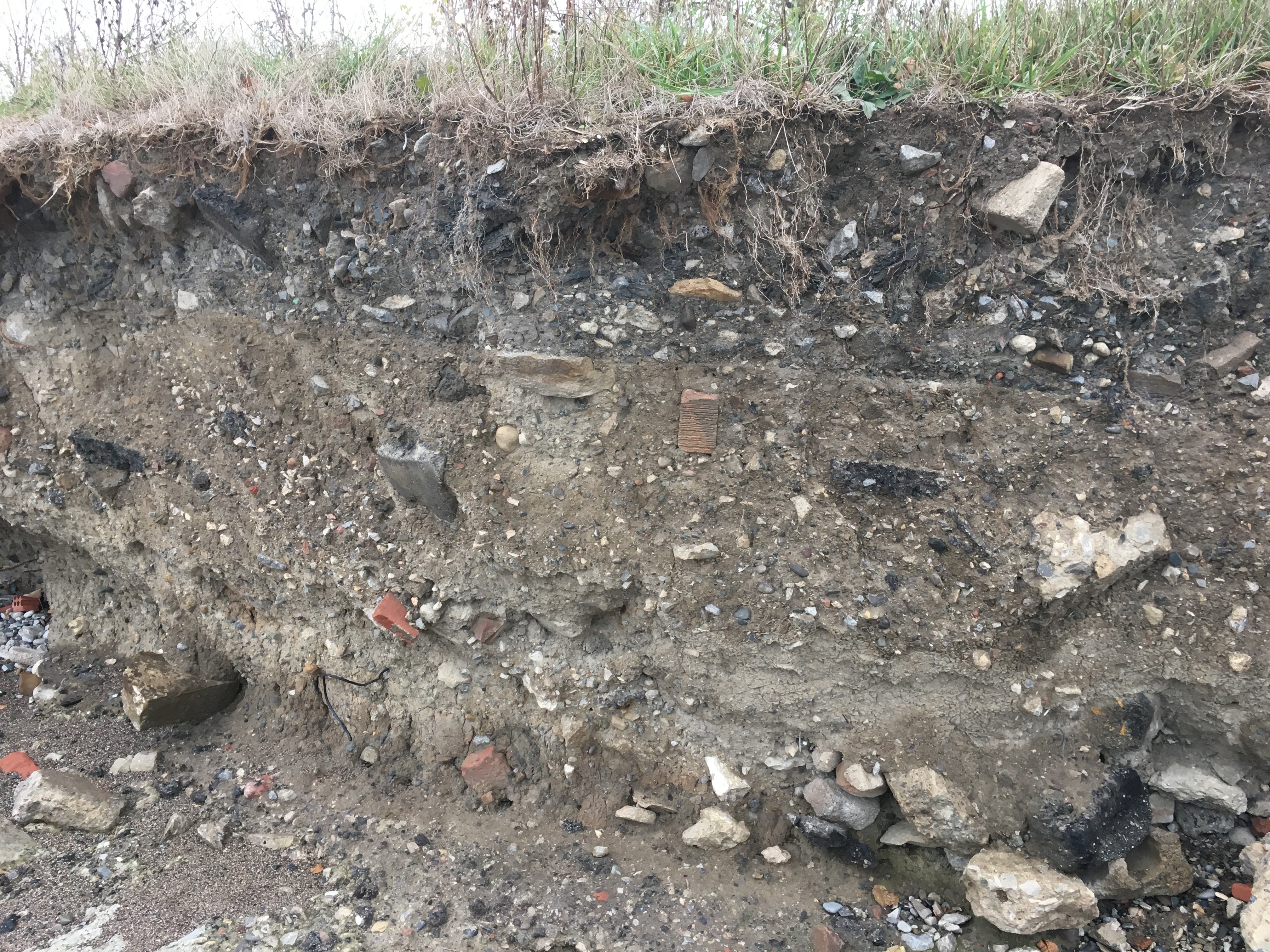 51 million cubic metres of landfill was used by the time the park opened on June 11, 1984.  The debris slowly erodes out of the shoreline and gets tumbled and rounded in the lake. As the years go by they will return to the sand from which they were created. A similar process is going on in Lakeside Park a little west of here.  Many of the bricks in this section of the park were made by Hamilton Brickworks.

Some wildlife is quite adaptable to living in close proximity to humans.  Although the park is made of landfill, beaver have moved in and made the shoreline home.  Instead of building a lodge to hide from predators in, this large specimen has a home in among the armour stone that lines the shore near the boat launch on the west side of the park.  The west park is also home to the Humber Bay Boating Federation and hosts two yacht clubs. The Etobicoke Yacht Club and Mimico Cruising Club provide docking facilities and the Humber College Sailing School is also operated from the west park.  Two red and white lighthouses are located in the yacht basin that were built in 1895 to mark the eastern gap in Toronto Harbour.  They were moved to the park after being taken out of service in 1973 and relocated in 1981. 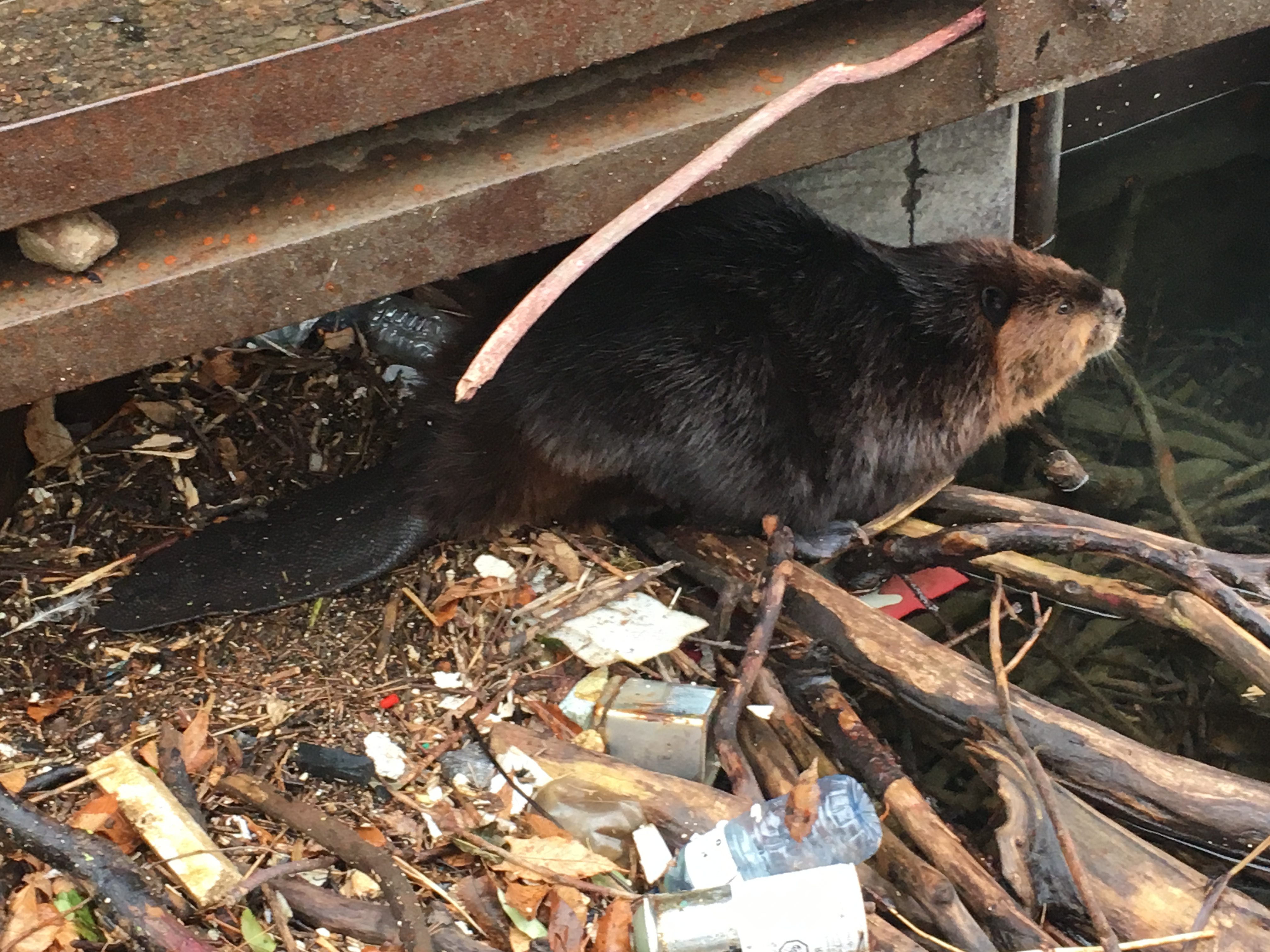 Canada Geese can actually be herded quite easily when they don’t have their young chicks to defend.  Parental instincts can make them much more aggressive than they are under normal circumstances. 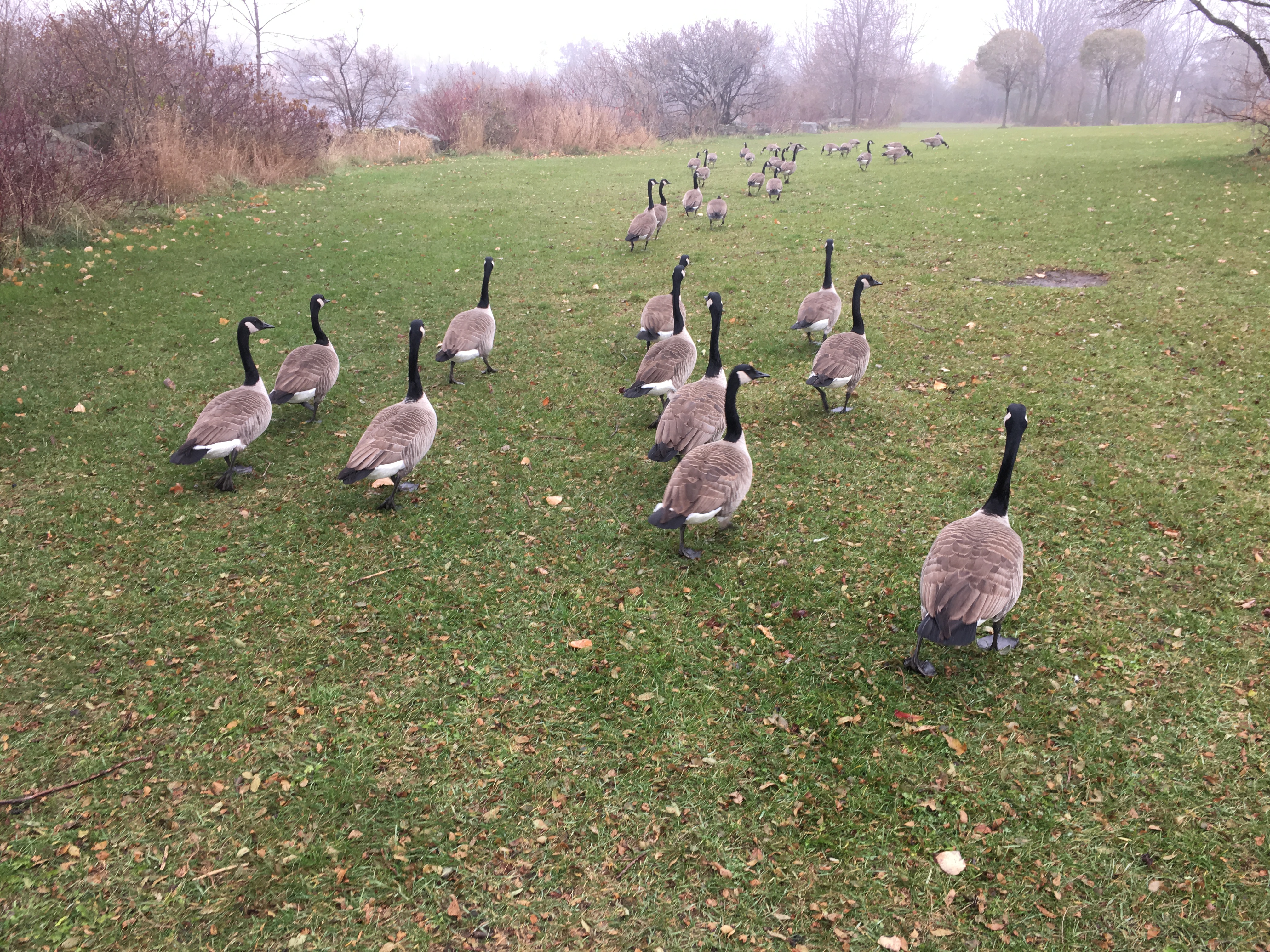 The mud along the side of Mimico Creek reveals the wildlife that lives in this little greenbelt.  White-tailed deer prints are mixed with those of racoons and Canada Geese.  Coyote prints can be found here as well.  They are easily identifiable by the fact that the front claws curl inward.  Domestic dogs have their nails worn down from walking on hard floors and concrete sidewalks.  The front two claws of the coyote print below cut a pair of deep grooves into the mud.  They would do a deadly job on a small animal, should it be caught unawares. 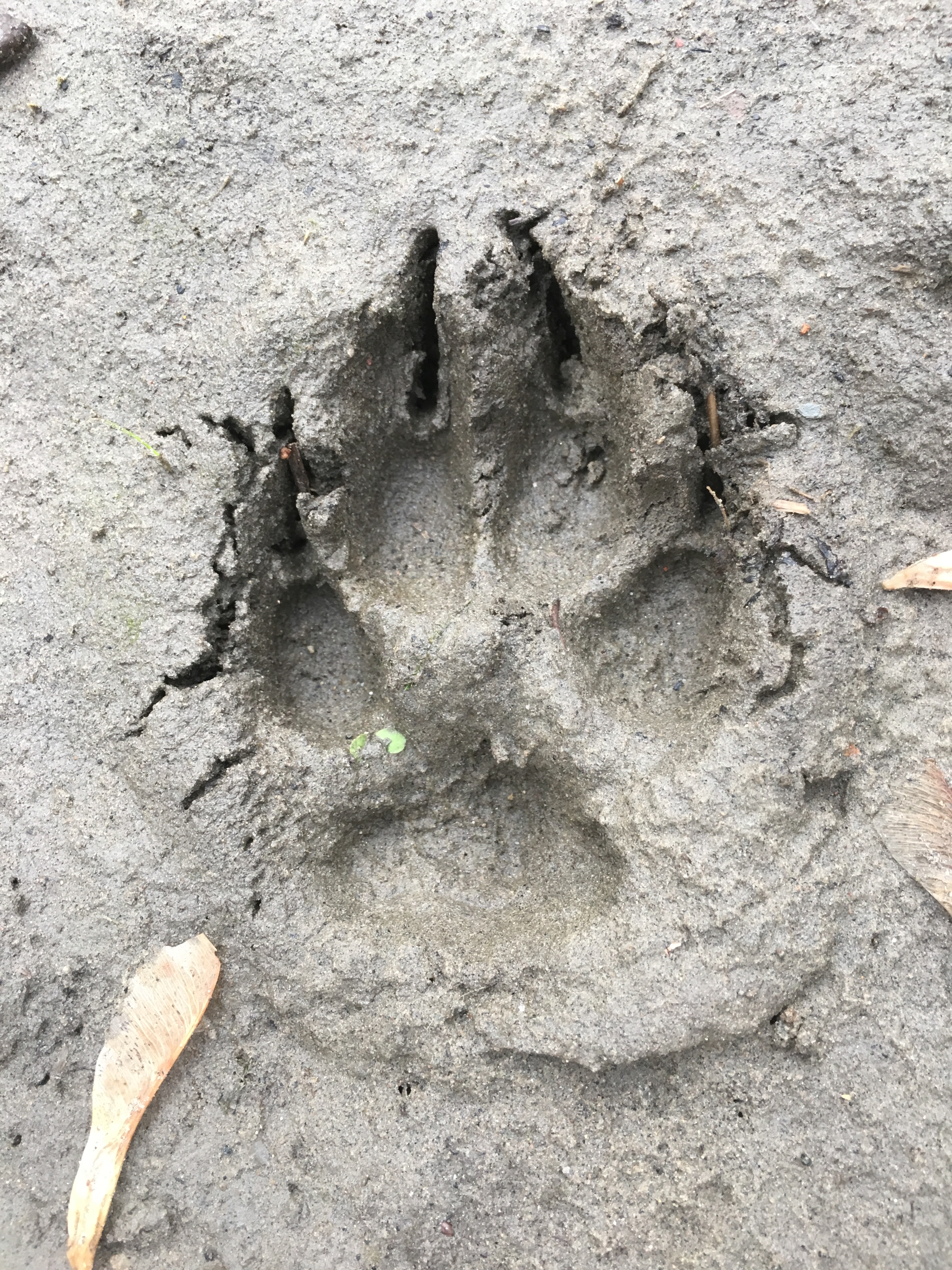 In 1997 the first single rib inclined arch bridge in North America was built across the Mimico creek near the mouth.  The creek is 90 metres wide at this point but was reduced to 44 metres to keep construction costs down.  The bridge deck was also reduced to just 2.5 metres to keep the project on it’s $650,000 budget.  The narrowing of the creek provided wetlands around the bridge attracting wildlife to the area.

The east park contains several ponds, the largest of which is traversed by a boardwalk.  Several restoration projects are underway in the park with the trail being diverted onto the boardwalk while the main trail is being repaired.  New habitats are being created along the shore by the addition of some random sunken logs, rock piles, log cribs and sunken vertical trees. 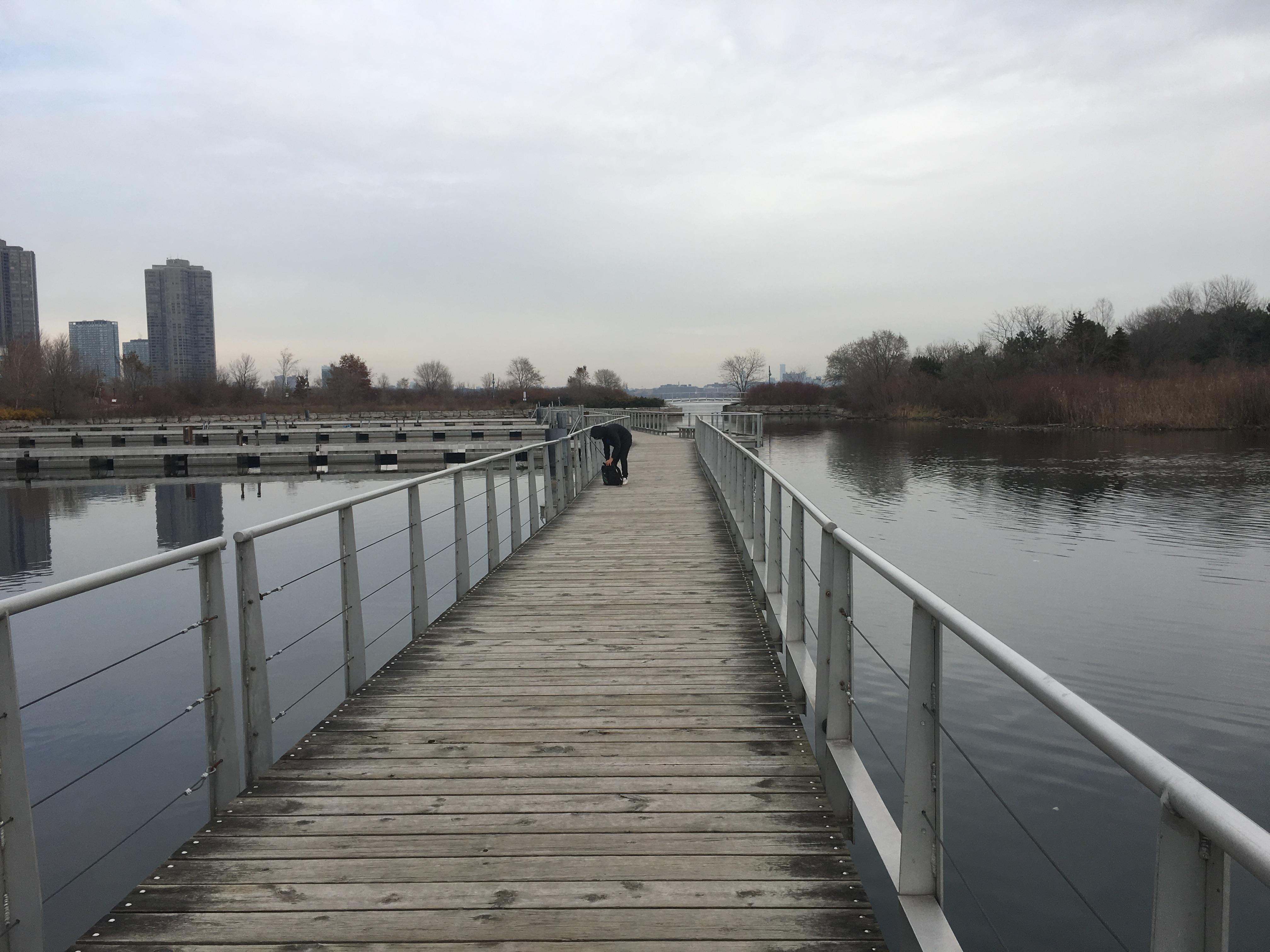 From the park, you can look back the shore and see the many towers that have sprung up over the years.  On the right-hand side, you can see the white arch of the bridge over the Humber River.  When it was built in 1994 many of these towers didn’t exist.  To the west of here at the mouth of Mimico Creek, the towers get taller with the tallest tower, 62 floors,  in Canada outside of the downtown core currently under construction. 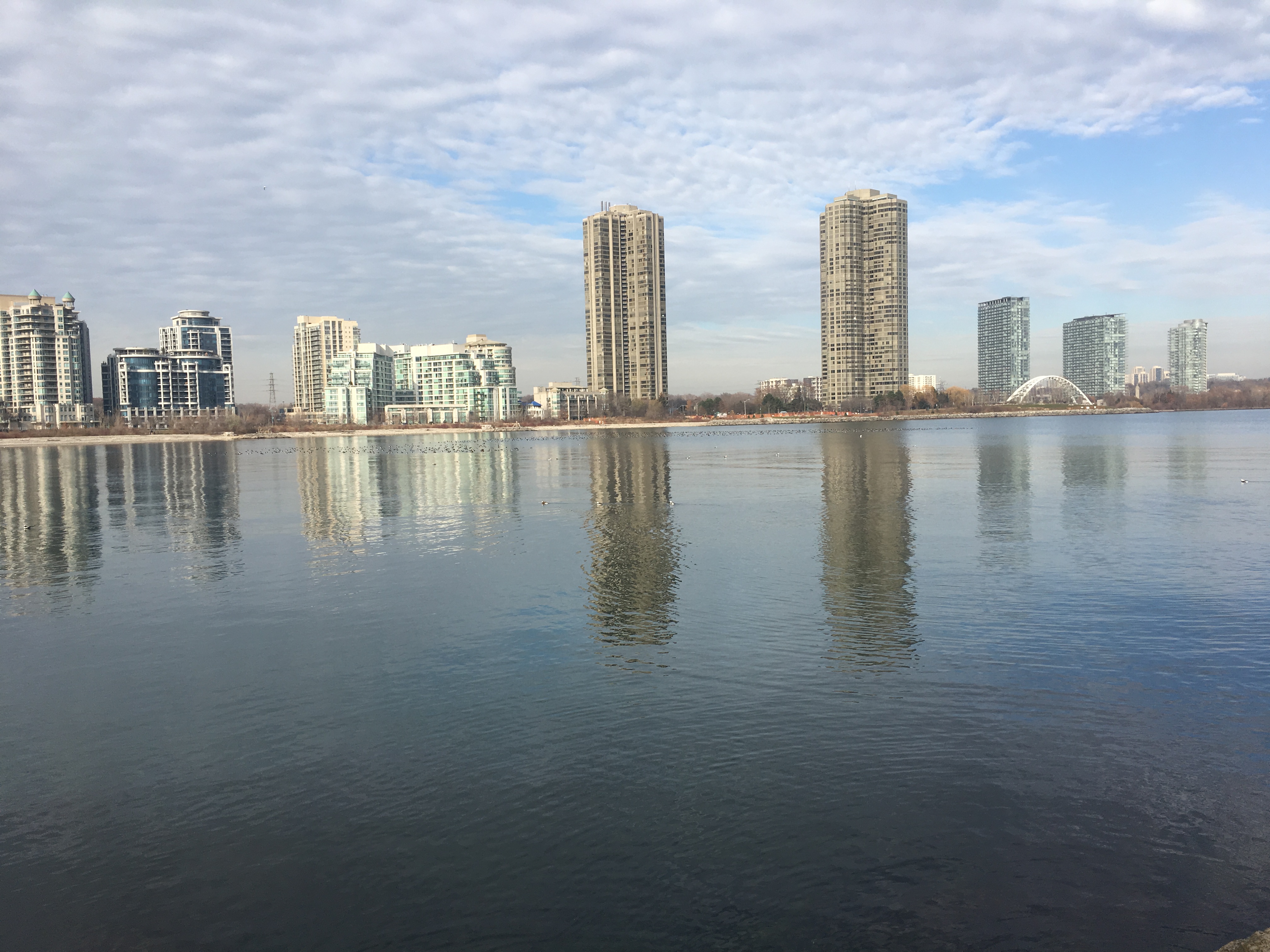 The park contains Toronto’s memorial to the victims of the bombing of Air India Flight 182 on June 23, 1985.  The flight originated in Montreal and was bound for Dehli and Bombay but it was lost over the Atlantic near Ireland. The sundial memorial in Humber Pay Park East was revealed on June 23, 2007, to commemorate the 329 lives that were lost to the bombing on that day. The stones in the sundial podium were donated from every province and territory in Canada as well as the countries of India, Ireland, Japan, and the USA. All of whom were touched by the tragedy.

This fall we photographed two pieces of artwork in along the east trail between Mimico Creek and the mouth of the Humber River.  They were created by local artists out of driftwood and represent a bather looking out toward Toronto’s skyline as well as the word Toronto.  The Toronto sign was badly damaged and had been repaired a few times but was finally removed on Dec. 9th, 2017.

The Waterfront Trail runs for 740 kilometres and part of it passes through the East and West Humber Bay Park area where it can be accessed by the residents of all the new towers going up along the shoreline.